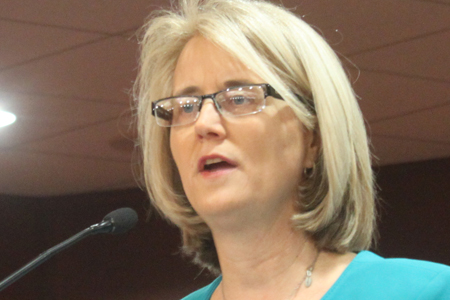 State Rep. Karla Drenner (D-Atlanta) appealed to patriotism, faith and “liberty and justice for all” during a hearing this morning asking lawmakers to protect state workers from employment discrimination based on sexual orientation and gender identity.

Drenner, the first openly gay member of the General Assembly, wants the bill to at least see a full committee vote before the legislature adjourns its annual session later this month.

Drenner first introduced the Fair Employment Practices Act in 2011 and it is now designated HB 427. The bill received an informational hearing this morning before a subcommittee of the House Industry and Labor Committee. No vote was taken, but Drenner urged colleagues to advance the bill to the full committee.

At this morning’s hearing, she specifically appealed to the conservative base of the Republican leadership, letting them know she is a “loyal American” sworn to uphold the Constitution and that she wears a cross around her neck as a symbol of her Christian faith.

“The overall intent of the act is simply to ensure that all people have a chance to compete for and hold a position of employment based on your job qualifications,” Drenner said of HB 427.

“Every day that we are in session I along with each of you place my hand over my heart and say the Pledge of Allegiance. I also took an oath to support the constitutions of Georgia and the United States of America. I wear a cross around my neck as a reminder of my faith. And just like many you, my prayers end with, ‘Jesus Christ Our Lord Amen,'” she added.

“I am a loyal American and I believe wholeheartedly in liberty and justice for all,” Drenner said.

“I don’t want you to misunderstand me. I understand government doesn’t grant freedom or liberty but as legislators we have a duty to protect law-abiding Georgians. By disallowing discrimination based on sexual orientation we make [it] a non-issue.

Rep. Pedro Marin (D-Duluth), a co-sponsor of HB 427 and a member of the subcommittee, urged his colleagues to get the bill to the full committee for a vote in the waning days of this legislative session. From the full committee the bill would then go to the Rules Committee where it could get the go-ahead for a vote of the entire House.

If anything, Marin said this bill should be a priority in January 2014 when the next legislative session begins. 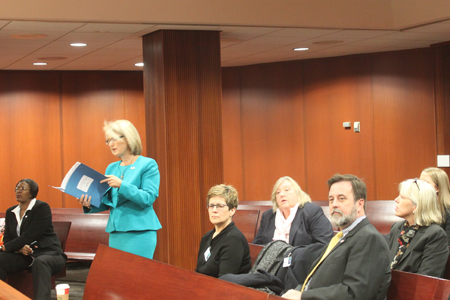 Georgia Equality Executive Director Jeff Graham also testified at the hearing. Graham explained his organization, the largest LGBT advocacy organization in the state, surveyed nearly 200 state employees, most of whom identified as LGBT. The survey was done anonymously over the last six months and provided compelling numbers showing LGBT individuals do not feel safe in their state workplace environment.

Of those surveyed, 70 percent identified as LGBT or gender non-conforming. The employees were from every state department, including colleges and universities, he said.

When asked if they had seen discriminatory behavior toward LGBT employees, 67 percent of those surveyed said they had.

Graham noted the Vandy Beth Glenn case. A legislative editor at the Georgia Capitol, Glenn was fired when her supervisor learned she was transgender. Glenn sued the state successfully and regained her job — but a great deal of taxpayer money was used to try to defend the case up to the 11th Circuit Court of Appeals.

“We don’t want to open up the state to lawsuits,” Graham said. “This discrimination is just not acceptable in this day and age.”

“This really is our future and fairness for your own employees in the workplace,” he said.

In another recent poll, 79 percent of Georgians felt this legislation was important, up from 68 percent just two years ago, Graham added.

“Public opinion is changing and rapidly,” he said.

State Rep. Keisha Waites, who testified at a hearing on Wednesday on her anti-bullying bill, also stated at today’s hearing the importance of passing HB 427.

“This is very personal to me,” said Waites, who is one of three openly lesbian members of the General Assembly, along with Drenner and Rep. Simone Bell.

“I’m simply here to ask you as a member and colleague to support this legislation,” she said. “We don’t ask you to condone a lifestyle. But fire someone because they are incompetent, because of absenteeism. Not because you don’t agree with their personal decisions in life.”

Drenner wrapped up the nearly 50-minute hearing by sharing personal experiences of being an openly gay legislator at Georgia, including some lawmakers who walked up to her and said, “I don’t like you because of your sins.”

“Do you think I was discriminated at that moment?” she asked.

She said she considered having her hair dyed purple to make a point to the subcommittee about stereotypes of how gay people look, instead of wearing the teal skirt suit that she said dispelled myths of what gay people look like.