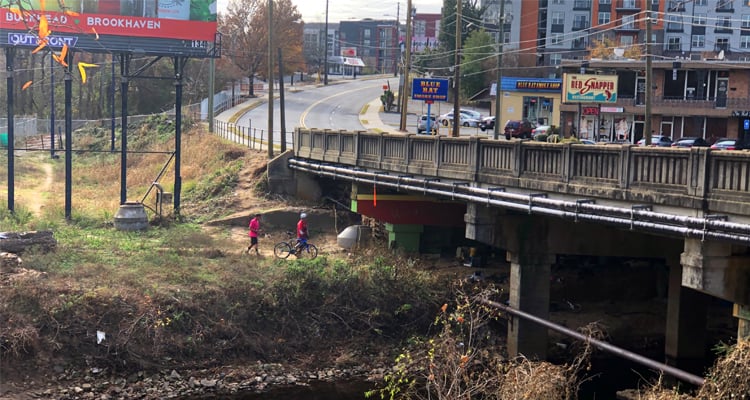 Lucia stabbed herself in the abdomen, recovered, and hid the huge scar behind tattoos. Robert, sitting inside the Ansley Starbucks, asked me for five dollars to eat. He said that he’d be willing to eat in front of me to prove that he needed food more than drugs. For the last few years, I’ve seen two other nameless young gay men camp at Starbucks during the day whenever it’s cold. One of them works at an Ansley business. Walking by Starbucks from LA Fitness, I recently saw a table piled with a gaudy but faded backpack that belongs to a brilliant man I know through a friend. He is couch-surfing and teetering on the edge of homelessness. He was not around. Guarding his backpack, I waited about 10 minutes for him to return. He didn’t.

Many years ago, as I’ve written before, I had to make a decision every evening whether to eat or spend my money getting drunk. I usually chose the latter. I was working, like many of the homeless still do, but I couldn’t get the money together for my own place. I was spared by homelessness by moving in with my wealthy but disapproving parents in Cobb County. I landed there soon after an incident with the police. On assignment with the AJC, I made a drunken U-turn on Cheshire Bridge Road to avoid a police blockade. The cops chased me under the bridge there. Thirty-plus years later, that bridge is a sad refuge for the homeless, including many LGBTQ youths. Some work, some sell and use drugs, some steal everything they can get their hands on. Everyone’s hungry.

This epidemic of LGBTQ homelessness and hunger is not improving. It’s your time to make a New Year’s resolution to help end this cruelty that plagues America more than any other country in the western world. Please don’t tell yourself that these kids deserve their suffering and that you won’t enable it by materially helping them. Suffering is suffering and it’s not your job to punitively measure out the help according to your own beliefs. That is sadistic, and it is exactly what the Trump administration is gleefully doing in its relentless efforts to tear down the social safety net, even caging refugee children. That is cruelty for cruelty’s sake.

Robert, who offered to let me watch him eat to prove his sincerity, followed me out the door of Starbucks. I pointed at Vinny’s next door. “Seriously,” I said, “I’ll just give you the five dollars or I’ll buy you a meal in there.” He did indeed go for a couple of slices, thanking me and taking a seat outside the restaurant. He threw open a book of blank pages and began scribbling. I asked him what he was doing. “I’m a writer,” he said. I laughed, saying “Now I understand your situation perfectly.” Unlike me in those dark years, he had nowhere to go. I had blown off a generous advance for a book I never wrote and my editor at the AJC sometimes sent someone to sit outside my door while I worked at home on an overdue story. All for alcohol.

In a time when unprecedented income inequality, homelessness and hunger are ruining lives at resultingly unprecedented rates, you have a few good options for volunteering and contributing money to help our particularly vulnerable community of LGBTQ youths. You can contact Lost-n-Found Youth at lnfy.org. It offers multiple services partly financed by a thrift store. Another helpful nonprofit, highly focused on housing, is Rainbow House Coalition, rainbowhouseatl.org. Forget the politics that plagued these organizations briefly. They have never lost their focus on our homeless youths.