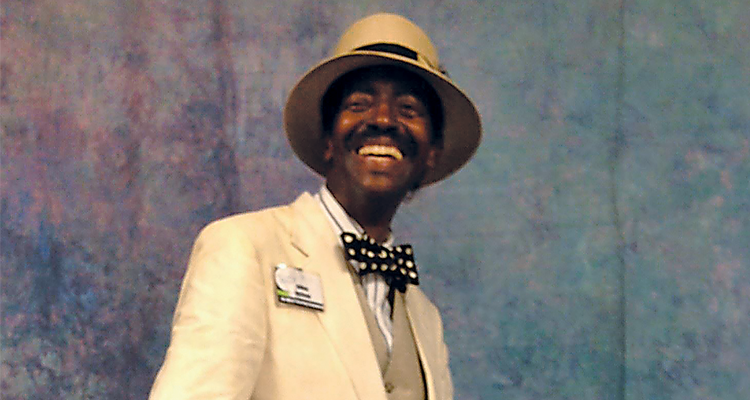 The Atlanta Committee, The Rose Room & Morehouse College (Before Loretta’s)

This is the third article from “Reclaiming Our Time: A History of Atlanta’s Black LGBTQIA Life,” a series of editorials that presents vivid and personal accounts of one of the city’s most definitive communities.

James Warren Jackson is a Black gay man born in Atlanta in 1946. He and his family lived in the Herndon Homes, a housing project built expressly for Black tenants in 1941. His dad worked as a janitor at Atlanta Public Schools, while his mom worked as a housewife and later became a substitute teacher, also at APS.

“It was enough,” Jackson recalled, “because we didn’t know there was anything more.”

He remembers his childhood as pleasant and uplifting, with very little exposure to the world beyond Southwest Atlanta. When he was around 11 years old, he and his mother were riding a local bus and as white passengers boarded, she directed him toward the back of the bus. Not recognizing what one had to do with the other, he questioned why. His mother gently responded, “You don’t understand now, but you will when you get older.”

On his first day of fifth grade, as he headed out for class, his mother advised, “That’s how girls carry their books.” He quickly corrected his stance and lowered the books to his side. “As soon as I got outside,” he recalled with laughter, “I held those books so tight to my chest and kept moving.” Both of the separate worlds he occupied jointly insisted that he perform silence and submission long before he realized he was a natural threat to each one’s order.

Eventually, Jackson discovered other young gay men like him among fellow students at Morehouse College. “Not only did I find out I was not the only one, there were so many, I never dreamed,” he said, laughing aloud. It was at Morehouse where he found his first sense of community and lifelong friends with whom he could fully be himself. He attended Morehouse from 1966 to 1970, a time shortly before the Stonewall Riots. This was years before watering holes like Fosters, Loretta’s, and Traxx gave Black gays in Atlanta welcoming space and respite from the shady white bars that discriminated against them with unchecked regularity. They had the Marquette, however, a now-iconic dive that was within walking distance from the college. Their favorite option was the Rose Room, a modest bar on Monroe Drive where Jackson first danced with a man. He and his friends would party on Friday and Saturday nights and again at the Sunday Tea dance. Those who could sew created outfits that they could show off at the Rose Room. “It took a lot of courage to get on that floor” Jackson reflected. “To be free, to express yourself was the excitement, not being inhibited or concerned about being ridiculed, because we were all gay.”

Atlanta Committee, one of the city’s few social networks for Black gay men, was a silently subversive product of its time. Jackson first heard about the Atlanta Committee from a fellow student who invited him to one their social events, and he soon became a regular member. Among its members was Dr. Otis T. Hammonds, the prominent anesthesiologist and major supporter of Black arts. The events, mostly brunches and dinner parties, were private affairs held in members’ homes.

“It was a great group to be a part of,” Jackson said. “They were intelligent and aware of who they were, living as best as they could.” Save for a few exceptions, Jackson’s peers avoided being outed. “Exposure could cause embarrassment for your family and cause you to be ridiculed, so you kept quiet,” he said.

Decades before Atlanta Black Pride, the Atlanta Committee organized two signature events that drew attendees from all over the country. Their Red & White Ball was a mid-winter festive occasion that featured a Miss Black America drag coronation. “This was the ’70s!” Jackson said, emphasizing the risk of such expression. The Harvest Weekend was a four-day celebration held on the week of Thanksgiving. From Wednesday through Sunday, a circuit of functions was held at various members’ homes. For both events, printed invitations were mailed along with a lists of accommodations where out-of-town visitors could stay in or near Atlanta.

I could hear the swell in Jackson’s voice as he described how people flocked to these Atlanta Committee gatherings, the kind that Black cishet and white LGBTQ historians strive to overlook. He assessed Atlanta Committee as “a trailblazer in exposing gay men to be empowered, to enjoy and take pride in what they are doing.” Jackson looks in awe upon the achievements of Black and queer liberation in the many years that have rolled on. As a little boy, he had to go to the back of the bus to perform as inferior for whites. As a man, he and his peers enjoyed newly won civil freedoms. Yet as queer men who faced legalized discrimination from the state and social condemnation from their own people, they remained at the back of the bus.

“I never thought we would have a Black president or that the Supreme Court would legalize gay marriage in my lifetime,” he said.

I was honored to have Mr. Jackson speak with me about his growing up and coming of age in the ’50s, ’60s and ’70s in Atlanta. We cannot fully appreciate the fruits of liberation we regularly enjoy (visible Black LGBTQI+ advocacy, openly gay and trans Black artists, Black Pride events, shows like “Pose” and “P-Valley,” and the 2021 “B-Boy Blues” film) if we remain ignorant of those whose unsung acts and undocumented lives embodied the blood, seed and soil that bore those fruits.