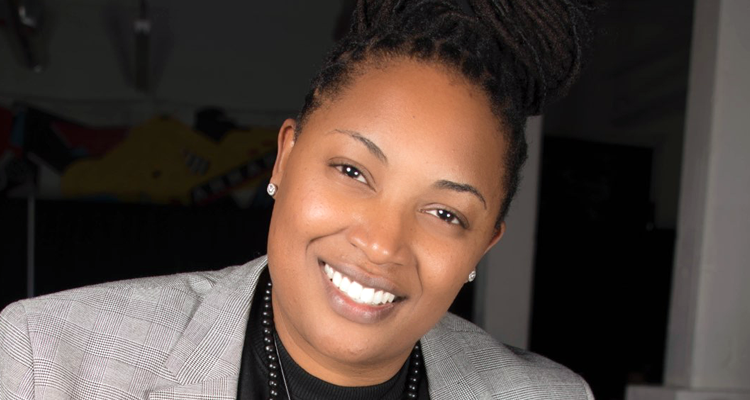 Over the past few years, Kia Barnes has been a leading party promoter and activist in the city of Atlanta. The well-known lesbian is living her life as a masculine-presenting woman who is unapologetically queer.

For the second year in a row, Atlanta Pride has decided not to host the much-anticipated event due to the lingering COVID-19 pandemic. Like many in the community, Barnes is sad that Pride won’t be held, but she doesn’t wait until this month to show off her pride. Through her promotions and activism, she constantly brings and promotes events that highlight the uniqueness, pride and diverseness of the LGBTQ community.

“Pride means owning everything about who I am,” Barnes told Georgia Voice. “Walking in your truth. Pride means honoring those who fought for our rights. Pride is unity.”

The former Atlanta middle school and high school teacher once known for roasting her students and turning the classroom into a mini comedy club took her friends’ advice and did a comedy show a few years ago. It was love at first laugh.

“Comedy comes very naturally to me,” she said with a smile. She would go on to promote her own comedy shows, and it was then that she realized she could attract a crowd. So, it was an easy transition to add “promoter” to her repertoire.

According to Barnes, her events are parties with purpose. Yes, there’s a DJ playing the latest hits and mixes and a dance floor filled with guests moving their bodies to the beat and drinking their favorite cocktails. But she has also offered panel discussions and has even paused the music for political candidates like Mayor Keisha Lance Bottoms, District 6 Atlanta City Council Member Alex Wan, Representative Park Cannon, and others to talk to the crowd about upcoming elections or bills to vote on.

Barnes works for two LGBTQ-owned businesses, My Sisters Room (MSR) and Apache XLR, hosting and promoting events. Her goal is to “create a safe space for queer entertainers to perform to welcoming audiences.” Comedians, singers, and musicians have told her their horror stories of playing straight venues and either being booed while on stage or mistreated at those venues.

At both MSR and Apache XLR, Barnes said all the events are LGBTQ-centered. “We are unapologetically queer no matter the response,” she said. Besides the typical dance parties, Barnes also puts on a music showcase at Apache XLR every fourth Saturday of the month. All the artists who perform are LGBTQ or allies.

“I want a lesbian to sing about loving a woman and a boy to sing about loving a boy and not worry about losing the audience,” Barnes said of her goal to provide a diverse range of entertainment for the community. Beyond that, she says her events are welcoming to everyone ages 21 to 101. She also has a huge following among the deaf community, and there are even guests in wheelchairs who come out and dance sometimes, incorporating their chairs in moving to the beat of the music. It’s her mission to make everyone feel accepted and welcome by ensuring all her events are accessible to people with disabilities.

Through her popular, crowd-drawing parties, music, and comedy shows, Barnes’s activism and sense of community shine through, which is why she is a member of the city’s LGBTQ Advisory Board.

She said she sees herself as a liaison bridging the gap between an often-underrepresented community of Black queer women and their concerns with city leaders and also educational leaders. It’s often at one of her events that participants will come to her and talk about various issues, areas of concern, or things that are lacking, and she is able to take those concerns to the mayor’s office. She has also sought out other opportunities to share the voice and needs of the Black queer masculine-of-center women by attending various events hosted by other LGBTQ organizations, such as Southern Fried Queer Pride and the Human Rights Campaign.

The former English/language arts and theater teacher who was once discriminated against because of her sexuality and former marriage to a woman now also sits on the Atlanta Public School’s LGBTQ Taskforce.

“It feels very empowering and liberating to get to be a part of change that I so badly needed when I was in the classroom,” she said.

Barnes left the classroom about five years ago because of the discrimination and overwhelming stress surrounding her sexuality. Now, she gets to rewrite student and staff handbooks and have a seat at the table for policy changes and decision-making. “I’ve come full circle,” she said.

Also known for her fashion sense and signature fedora, Barnes also promotes an Andro Fashion Show. The show is an opportunity to feature LGBTQ fashion designers and models but also to portray masculine women in a different light.

“We are talented,” Barnes said. “We are intelligent. We are contributing members of society.” The Andro Fashion show features the many facets of masculine-presenting women from a variety of sizes and styles. Although it has been a while since the last fashion show was held, Barnes said there are plans for another.

As Barnes reflected on her own coming out in her early 20’s, she recalled the repercussions of members of her college, sorority sisters, and other school organizations she belonged to not handling the news well – so much so that she left college for a while and worked Disney’s College program for a year. It wasn’t that long ago that many LGBTQ members living their truths did so during a time of ostracism and discrimination. But she has seen the positive changes and how members of the community are now more readily acceptable.

For anyone still struggling to come out or accept their sexuality, Barnes says that “it gets so much better when you are walking in your truth… Be bold and walk in your truth. Nothing feels better than being unapologetically yourself.”

Learn more about Kia Barnes at her website, KiaBarnes.com, or on social media @kiacomedy.