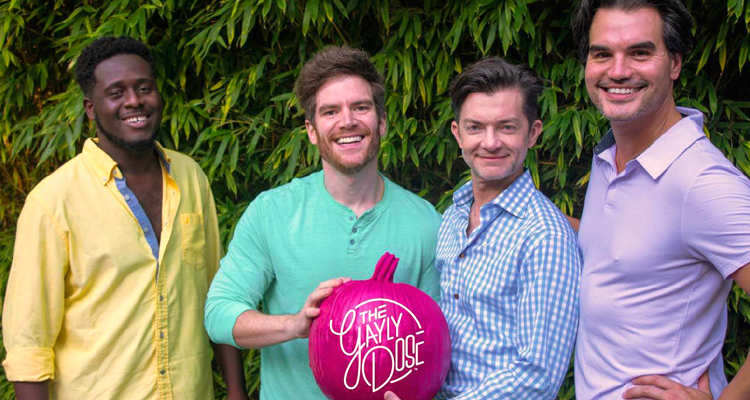 Kiki with The Gayly Dose

How did y’all meet, and how did this project come to be?

HELMUT: I was looking for better connections in the gay community and deeper friendships, and I was frustrated to some degree. I sought out an opportunity to do some peer mentoring, and then I started a game night. Bennett was actually a member of that group and had the original idea to do a podcast.

BENNETT: The game night was great, it was fun, but it also felt pretty superficial when it came to what you learn about the other people in the room. It was very similar to other outlets gay men use to meet each other: apps, bars, and alcohol-related activities. Instead of just playing games, we had a mutual friend [have the idea for a deeper Q&A]. Helmut and I knew each other in passing, but we became truly great friends because of the fact that we started learning more about each other’s passions and struggles. It turned out to be something that was super fantastic.

Helmut asked who I thought would be a great voice for this cast, and that’s when I reached out to Dante.

DANTE: I had been blogging for the past five years, and I was really passionate about it, but I was wondering what was next for me. I was on the way home from work when Bennett called me. I was like yes, yes, yes, yes, YES, because a week before that call, a psychic told me I was going to be doing something like a podcast. It was meant to be!

STUART: Helmut and I met at a dinner party. We got to chatting and realized there was a bit more of a deeper friendship there that we were looking for. This possibility [for the podcast] came up, and I jumped right in.

HELMUT: We had other people audition, but the people who were really drawn to [The Gayly Dose] mission are the three other people you see here.

You’re all living in Atlanta, which is a sort of respite in a largely conservative area like the South. How has that experience influenced you and how you view your sexuality?

STUART: I’m from rural Georgia, so respite is a perfect word for Atlanta. It brings a sense of comfort. It’s a red state, but we have this beautiful purple and blue bubble in the middle where you can really be yourself. If you are from those rural areas and you can’t find yourself, you can find yourself in Atlanta.

DANTE: My experience is a little bit different because I was raised in metro Atlanta. So, it was always more easy for me to come to the gay lifestyle. It wasn’t so taboo for me as it was for a lot of other people. Growing up into a gay adult, it’s been really beautiful to live so freely in a city like Atlanta that’s so accepting and loving.

BENNETT: I work for a large software company based in San Francisco, California, so I have a lot of friends who have lived in California their whole lives. They say things to me like, ‘Hey, why don’t you come move to a more progressive city and state?’ But I love the prospect of being able to change hearts and minds. People in [places like] California may not be able to do that because that’s the norm.

What makes The Gayly Dose different from other podcasts out there, particularly those dealing with the LGBTQ community and gay men?

STUART: We’re simply not filtered. We have true conversations as we would if it were just us in the living room with some wine. We’re just being genuine with one another.

DANTE: What’s so beautiful about our podcast is we try to have conversations that range from your every day, funny, more cliché topics to things that are so taboo you’ll be a little more afraid to talk about them. Because we have developed this nice bond and friendship, we’re comfortable with each other.

My thing that I do at the end of every episode is called the Call to Kiki, which inspires people to use the framework that we set in place with our podcast episodes and take it into their groups and their communities.

BENNETT: I have Bennett’s Minute, which gives people a way to have a vision of what we think the gay community should be in the future. It’s amazing, it’s something I’ve never seen before.

I also think what makes us really different is the fact that we’re not afraid to be authentic and we’re also not going out of our way to be vulgar or [overly] sexual. We try to have those conversations that gay men just don’t have.

STUART:  We really go there. We discuss things that are hard and can affect you for a long time.

HELMUT:  A lot of the podcasts in our category are either informational and historic or they’re sensational and sexual. Like Bennett says, we’re trying to be deep and real.

What topics are you each most excited to talk about?

STUART: [My favorite episode was discussing] growing up in rural Georgia in a very Christian and judgmental environment and what it takes for a person to overcome that and the self-loathing that is instilled at a very early age.

DANTE: I think the topics that are the most intriguing and interesting are the ones we’re most afraid to talk about, that society may deem taboo. Talking about religion, people always want to skirt around that. When you have honest and vulnerable conversations about things like religion or masculinity and femininity, those things evoke emotion in people. It makes you start to think more about life and how you can be more genuine about your existence and your reality.

BENNETT: I think one of my favorites was about how relationships are evolving in this generation. I’ve talked to straight women and men about this, and they agree. It doesn’t have to be the traditional marriage, one-to-one monogamy thing. There’s always some kind of gray area in relationships, and that’s something people really don’t talk about.

HELMUT: I like the more boring topics [laughs]. I like talking about the workplace, adoption, things that are boundaries we share with the straight community but maybe we have a different experience in.

If you could describe The Gayly Dose with one word, what would it be?

The Gayly Dose debuts November 17 wherever you find podcasts.