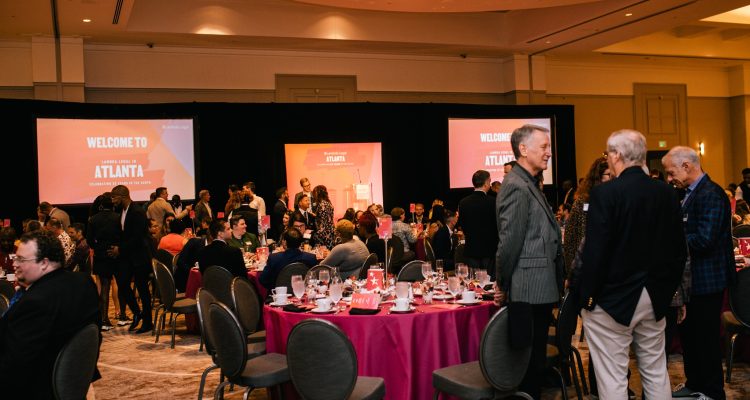 Last Sunday (September 18), members of Atlanta’s LGBTQ community gathered for the 25th anniversary of Lambda Legal’s Southern Regional Office. The fundraising event, which was held at the Intercontinental Buckhead, highlighted both the past and present work the LGBTQ legal advocacy group has been involved with.

“It was a way to connect people who are interested in this work as well as to raise the funds that we need,” Michael Schutt, the Southern Regional Director, told Georgia Voice. “Lambda Legal is mostly funded by individual giving through companies or law firms as well as bequests in people’s wills and estates. We don’t receive any federal or state money because, well, we’re often suing the federal government or states. This means that every single year we have to continue fundraising to make sure we can do our work. Being an organization that is employing some of the best legal minds in the country, this means that that work can be expensive… Part of this was making sure the community knew that everything that they were investing in us – whether it was their time, their talent, their money or resources – to make sure that they knew it was money, time, and brainpower really well spent.”

The event highlighted the 25-year history of Lambda Legal’s Southern arm by highlighting some of their significant cases based in Atlanta, like removing sodomy from the books, the Vandy Beth Glenn case (which established the first understanding of sexual orientation and gender identity discrimination as sex discrimination), addressing police misconduct during the Eagle raid, and a case involving couple Derek Mize and Jonathan Gregg (who were in attendance with their family), who sued the State Department after it refused to recognize the U.S. citizenship of their daughter who was born in England via surrogate.

They also highlighted the work they’re currently doing, most of which Schutt said is involving anti-transgender legislation with a focus on health care and youth, as well as looking to the future of what could be coming, like Don’t Say Gay legislation in Georgia.

“One of the big intentions was to celebrate this history but also provide the community with what I refer to as the receipts of our work,” Schutt continued. “Often people don’t know everything that Lambda Legal has its fingers in because, quite frankly, it’s so busy doing the work. We don’t do the best job of telling our story over time… We wanted to honor the past, give people a snapshot of the present, and give them a look forward.”

This connection of past and present was represented in the guests who gave the welcome address: Cathy Woolard, the first out elected official in Georgia, and Alex Wan, a current LGBTQ member of the Atlanta City Council.

This event also marked a new development in Lambda Legal: the Joan Garner and Jane Morrison Movement Building Internship, in honor of the late Garner, the first out person on the Fulton County Commission, and her wife Morrison. Starting next year, Lambda Legal will be accepting interns to work in the Southern Regional Office.

“Some of the interesting pieces to their story is that they met through Lambda Legal, they both served as board members of Lambda Legal, and Judge Morrison served as the founding Regional Director,” Schurr said. “Understanding these two women that were and continue to be giants within this movement, especially in the South, and knowing how they both contributed to the work of Lambda Legal and beyond and Lambda Legal also gave to them, we thought it was really important to honor them in some way… It’s an opportunity for us to support a pipeline of future Joan Garners and Jane Morrisons that we’re very very excited about.”

The organization had a fundraising goal of $250,000, and Schurr said that while they have not yet calculated the total money raised, going into the event they had jst over $200,000 and he “believe[s] we’re going to hit our overall goal.”

The fundraiser was planned and put on by the Atlanta Leadership Council, a group of volunteers with the organization. Those who wish to become involved with Lambda Legal are encouraged to join the group. You can join by contacting Schutt at mschutt@lambdalegal.org.