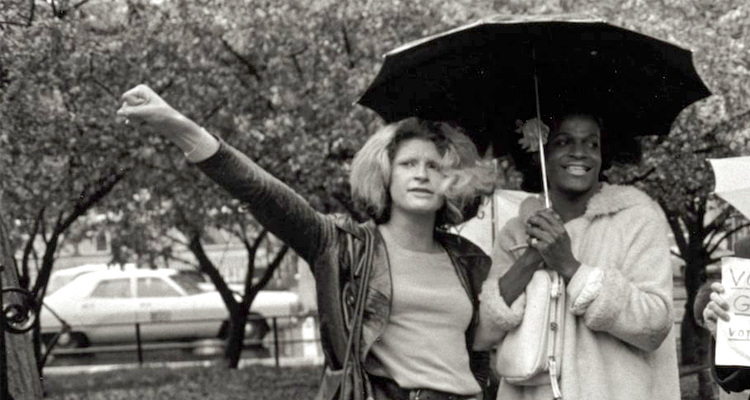 Marsha P. Johnson and Sylvia Rivera: Two of the Progenitors of the Modern Queer Movement

Stonewall — the shot heard around the world.

Multiple millions celebrated Stonewall’s 50th anniversary in 2019. And now millions know of the two legendary rebellion queens: Marsha P (“Pay it no mind”) Johnson and Sylvia Rivera. Insurgent, incendiary, and finally getting some love and respect. But who were they?

Young Marsha in Elizabeth, New Jersey, had a dream. Immediately after her class of 1963 high school graduation, she moved to New York with $15 and a bag of clothes. She would dress as she wanted and have the friends she wanted just to lead a larger life.

It wasn’t easy, turning tricks and getting arrested (after her 100th arrest, Marsha stopped counting). She’d occasionally share a flop or hotel room with “the girls,” or have a boyfriend, but mostly she lived on the streets.

One day the 18-year-old Marsha was working 42nd Street and met the also-working 12-year-old Sylvia. It was Sylvia’s second year out there. They became fast friends, sharing an unshakable trust and, eventually, a vision of a better world.

Tall, dark-skinned and perpetually smiling, it seemed that parties swirled around “The Mayor of Christopher Street.” Everyone who knew Marsha spoke of her generous nature. When someone complimented an item of clothing she wore, she’d give it to them. But more importantly, she was one of the few drag queens who’d hang with “the street rats,” as they deemed themselves: the very young who were truly oppressed and dispossessed, the same queers and transvestites (self-prescribed) who started the riots.

But despite her regal ways, Marsha had addiction and mental health issues, and had been ejected and then permanently banned from numerous bars around the city. Marsha always insisted, “What’s the point of complaining? It doesn’t get you nowhere.”

It’s clear both Marsha and Sylvia embodied what black queer feminist thinker Alexis Pauline Gumbs calls the “never straight” — queer pioneers unable or unwilling to hide their difference — which means they forced their queerness to be publicly acknowledged wherever they went … the ones at the forefront of queer rebellion.

As for Marsha and Stonewall bricks, she repeatedly said, “I did not throw the first brick. I was uptown and didn’t get downtown until about two o’clock; the place was already on fire.” She did shimmy up a lamppost in heels and drop a brick onto a cop car to great effect.

After STAR had run its course, Marsha still advocated for various groups. Toward the end of her life, she worked with PWA/HIV+ people, political prisoners, and gender “non-con” kids.

We lost Marsha in 1992, when her body was fished from the Hudson River. Her death was ruled a suicide, but the authorities could not explain how she got a hole in her head. After much agitation, the case was reopened in 2012, and the cause of death is now officially “undetermined.”

On February 1, 2020, Gov. Andrew Cuomo announced that East River Park in Brooklyn would be renamed in Marsha’s honor, making her the first LGBTQ person to have a New York state park named after them.

Now on to Sylvia, “The Mother of all Transpeople,” known for in-your-face activism on behalf of her people. She saw what needed doing and then set about doing it, whether you liked it or not. Unsurprisingly, she was called “an easy Queen to love and a hard one to like.”

Sylvia was Bronx born and bred, with a Venezuelan father who left before her birth, a Puerto Rican mother who committed suicide when she was three, and a grandmother (“Abuelita”) always hostile toward the “never straight” kid she repeatedly told she never wanted. Sylvia left the home at 10 and hit the streets.

She began turning tricks and taking hormones. But after a short time, she concluded, “I don’t want to be a woman. I just want to be me. I like to dress up and pretend and let the world think about what I am.

Sylvia always laid it on the line: “Queers grow up being alienated from everyone around us. You come out, and you’re not the right type of Queer, you’re alienated from your own kind. Where do you go, what do you do?”

She saw the things stacked against her, the how and the why of her oppression. She identified with the revolutionaries, like the Black Panthers and the Young Lords. But she did not give them a pass on their homophobia.

“[The first night,] I was doing black beauties and scotch, and the next thing we knew, we were being raided,” Sylvia said of Stonewall. “The Queens started being filed out … Guns were drawn, Molotov cocktails are being thrown (I even threw one), and I’m like … the Revolution’s here. Thank God!”

But revolutions are not created and then finalized overnight; they take work. And so the first revolutionary, multi-issue Gay Liberation Front burst into being. Women, men, transgender, no call, artists, musicians, political peoples of all stripes and all colors, people with privilege and without, connecting the dots and mucking about.

And then the reformist, single-issue Gay Activist Alliance arose. They sought to accomplish concrete things, and thus wouldn’t consider anything deemed not related to a certain type of gay liberation.

Sylvia decided to do something about the homeless youth, who’d been among the first to resist at Stonewall. Naturally, she approached Marsha, and they formed STAR.

They also created STAR House: a Lower East Side wrecked apartment owned by a small-time mafioso who didn’t provide water. But this was a place where the kids could stay and not have to work the streets — Marsha and Sylvia did that for them. Here, the kids could be fed. They could form a family. This was revolutionary!

Unfortunately, their efforts were not supported by the community at large. Still, Sylvia and Marsha kept pushing. Hard.

The last straw came during 1974’s 5th Christopher Street Liberation Day Rally. Sylvia got onstage amid crowd boos: “I had to fight my way up on that stage … people that I called my comrades in the movement literally beat the shit out of me.” (Her “Y’alll need to quiet down” speech from that moment is on YouTube.) It hurt her so deeply she attempted suicide, and eventually retreated from all the assaults by falling deeply into drugs and alcohol.

Sylvia spoke of how she was “dusted off” for the Stonewall 25 parade, as a Surviving Stonewall Veteran (SSV), and then put back on the shelf.

But Matthew Shepard’s death propelled her back into passionate activism: protests, speak-outs, arrests. She began volunteering at an MCC food pantry, whose recipients were largely the homeless, the street kids, PWAs. She got sober and was hired to direct the pantry. Her activism meant she was once again feeding her kids, and now with an apartment, providing a place to stay.

As she was dying in 2002, Sylvia focused on the Sexual Orientation Non-Discrimination Act, which would add “sexual orientation” as a protected category under New York State’s Human Rights Law.

She extracted promises from the “Pride Agenda” people. Sylvia’s friends reported she was very happy for her trans people, who regard her as “our own Evita.”

Evita has many statues, there are none for our two heroes. Happily, preparations are underway to erect a monument to them, via the She Built NYC committee, and a project budget of $750,000 has been raised.

Sylvia and Marsha’s names are often invoked when “Stonewall” magic is trotted out annually. But the nitty gritty of their lives and their activism seldom gets mentioned amid the hagiography.

Today, their names live on through services existing for their people.

The Sylvia Rivera Law Project, begun in 2002, provides access to educational, social, health and legal services for “transgender, intersex, and gender nonconforming individuals, while also teaching to engage politically … and empowering them to take action.”

We all need our history. Consider one commemoration among dozens during the 50th anniversary observations: the dedication of the National LGBTQ Wall of Honor, an addition to the Stonewall National Monument, and the first U.S. National Monument and Park dedicated to LGBTQ rights and history, run by the National Park Service and just steps away from the Stonewall Inn. This memorial is dedicated to LGBTQ “pioneers, trailblazers and heroes.” Sylvia and Marsha are among the first 50 inductees.