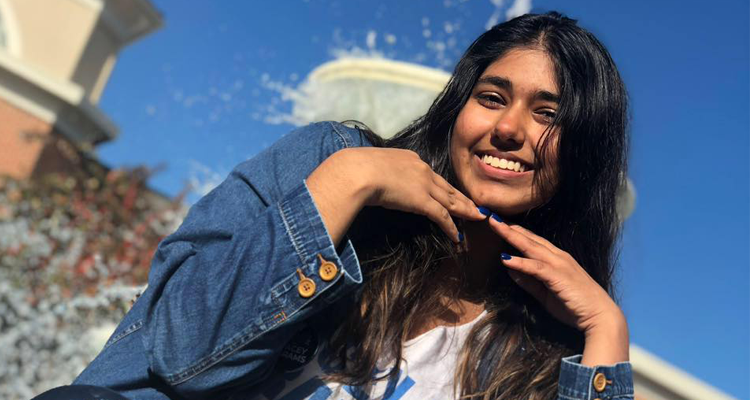 As we look to the past and honor the history that came before us, we can move forward. Young LGBTQ people are taking the work of their predecessors and doing just that. One such person is Rhea Wunsch. The 20-year-old is a student at Georgia State University studying public policy with a concentration in public management and governance, a minor in Women’s, Gender, and Sexuality Studies, and a certificate in social action. Wunsch was honored last year as one of Atlanta Pride’s grand marshals for her work with community organizing and activism.

We sat down with Wunsch to discuss her activism, how young people are leading the fight against gun violence, exploration of self among LGBTQ young people, the existential dread of Generation Z, and more.

When and how did you get involved in activism?

I first got involved in my freshman year of high school, in 2016. Donald Trump got elected, which even in the eighth grade I was like, ‘That’s not going to happen. There’s absolutely no way America is going to vote for Donald Trump to become president.’ And then we did. It turns out the people I thought would be smart and logical voters weren’t being smart and logical voters. So, I decided to get involved. I had no idea what I was doing at first. The first event I hosted was in Piedmont Park called the Political Postcard Party. It was a letter-writing campaign, we had people stop by and write letters, and I sent them out to all our Georgia representatives. From there, my activism grew.

In 2018 was when the Parkland shooting happened, and it was the first time in my experience that young people were making a space for themselves in the political world. I was working on the Stacey Abrams campaign, and I got involved in March for Our Lives. I’m actually with them in D.C. this week lobbying for gun violence prevention measures.

Can you talk more about your work with March for Our Lives?

March for Our Lives is a completely youth-led gun violence prevention organization. We’ve been around for a bit over four years; it started after the Parkland shooting in Florida. It was a call to action for young people, because gun violence is an issue that my generation has grown up with. We’ve done lockdowns, we’ve dealt with school shootings. It’s something my generation is extremely passionate about. March for Our Lives is the biggest organization involved in that.

This week, we’re in D.C. We have almost 200 people here, including students, teachers, grandparents, we even have a fifth-grade student lobbying with us this week, she’s 11 years old. We’re meeting with people on both sides of the aisle. In the Senate, we’re trying to pass universal background checks, and on the House side we’re trying to pass the Protecting Our Kids Act [the Protecting Our Kids Act passed in the House after this interview].

Last year, you were named one of Atlanta Pride’s grand marshals. How did that feel? Was that an exciting accomplishment?

Yeah, I was really excited about it because I remember the first time I went to a Pride parade. It was a magical thing. I feel like I’ve built up the ladder. The first time I went to Pride, I went completely as an attendee. The second time, I was marching with March for Our Lives, and the third time, I was interning at the ACLU, so I was working a booth. So, I feel like this was just the final step! It’s really exciting because I know it’s a big accomplishment; Stacey Abrams is a previous grand marshal.

Honestly, I thought I was too young to win it, so it was really exciting to get the call.

I feel like, even in Georgia, people are more accepting than ever. Especially within my generation, there’s a lot more room to explore. That’s something that’s been missing. I know people who have been trying to figure out their gender, so they’ve been switching their pronouns back and forth for years, they’ve tried out several different names. There’s a lot of opportunity to figure out who you are, which is really credited to the older people in the movement who have been doing this work for so long. I want to say thank you to the people who have been in this movement and who’ve given us this room to explore our genders and sexualities in a safer environment. Obviously, there are things that aren’t completely safe everywhere in America, especially in Georgia. But I think it’s something, moving forward, people are becoming more accepting of.

On a more negative note, I know a lot of young people today experience some existential worry based on the status of the world at the moment. Like with this anti-gun violence campaign, a big reason so many young people are involved is because young people are being affected by it, even elementary school-aged children. Is that something that resonates with you?

I work in activism, there’s a lot of bad news every day. I think that the climate crisis is a big part of that, because at the end of the day, in 10, 20, 30 years, it could all just be over. It is terrifying to think about. There’s always the question of if this is going to mean anything, or are we all doomed? But I also think we’re making strides, and that’s something activists need to focus on. Even on a citywide level, there are good things happening.

But it does feel existential at times. Everywhere we turn, there’s an economic crisis, there’s climate change, there’s another mass shooting. It’s exhausting work to do, and it’s overwhelming a lot of the time. But if we continue to work on this, we can fix it.

To end on a more positive note and look forward to your future, what are you hoping to do professionally once you graduate?

That’s a great question, and one that I’ve thought a lot about. I would like to work in legislative or policy work. Especially being in D.C. right now and being able to lobby and meet these people in Congress and having them hearing our stories and being able to address the issues and hesitations they have head-on has been extremely rewarding. I really think lobbying is something I’d love to do in the future.