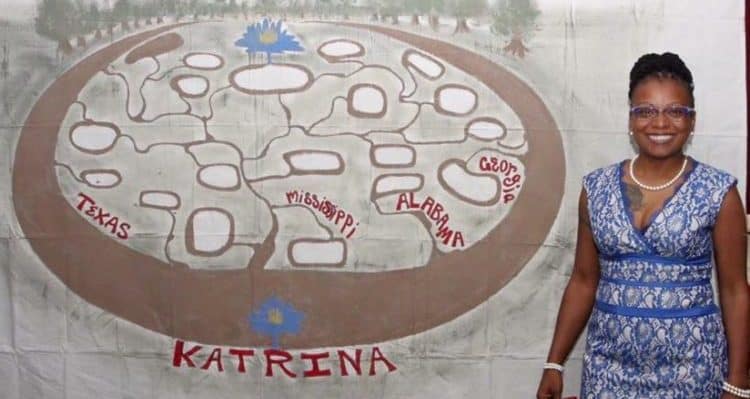 ZAMI NOBLA, the Atlanta-based National Organization of Black Lesbians on Aging, will celebrate LGBT activist Audre Lorde’s birthday in style this Saturday. The group revived its scholarship foundation last year, and the 2016 recipient will be publicly honored at the first-ever Audre Lorde Scholarship Luncheon.

“I’m happy to be thanking the gay and lesbian community because as I’ve grow, I’ve detached a bit to grow myself, and I realized who I am. All of that goes into finding this group of women who bring all of that out of me and give me a platform and a place to feel comfortable in a new identity,” scholarship recipient Enchante Blue Lotus Franklin told Georgia Voice.

Franklin, a third year Ph.D. student at Clark Atlanta University studying social work, found this scholarship appealing because it was more than just money — which she plans to primarily put toward books for her research —it was a group of women she could become involved in.

“I look for scholarships that I can be a part of the organization and help with change,” she said. “I’m looking for that mature, educated professional group. I need to move in my profession. That’s what ZAMI has given me. … Not only will you get the scholarship, they will pull you in and nurture you and take care of you mentally, physically.”

The reinvigorated Audre Lorde Scholarship Foundation is geared toward black lesbians age 40 or older who are pursuing a collegiate education. Originally, LGBT individuals sponsored scholarships in their names allowing recipients to develop lasting friendships and mentoring relationships over the years. The scholarship was in place from 1995 to 2008, when the organization took a break to restructure and find the best way to serve its membership.

When individuals are kicked out of their homes because of their sexuality, it can mean they aren’t able to achieve educational goals, said Mary Anne Adams, executive director of ZAMI NOBLA.

Adams said the organization is excited Franklin is the first recipient of the renewed scholarship program.

“[Franklin] grew up in a very impoverished community where she had a lot of financial and academic challenges, so it was really important for her to push herself to the highest level of academia,” Adams said. “She’s emerged, as she calls herself, a blue lotus flower. She’s amazing. She has an amazing spirit.”

Franklin grew up in New Orleans, Louisiana, and holds an undergraduate degree, a master’s deree in social work and a master’s degree in criminal justice. She is a forensic social worker, a former police officer and heavily involved in working with today’s youth. Come April, Franklin will also be a published author.

“It just talks a little bit about my life and it also talks about me moving through my sexuality and how I came to be who I am today,” she said.

Aside from the book, her latest project is designing a math and social sciences school, and delving into programming that not only gives kids something to do, but helps them overcome some of the issues facing their generation.

The event Saturday will celebrate not only Franklin and the legacy of Audre Lorde, but the entire LGBT community of color. Guest speaker Emilie Townes, the only out black woman who leads a divinity school in the US, will provide a keynote, and entertainment will highlight both The ADODI Muse: A Gay Negro Ensemble and the Women Sweet on Women Trio. Two “sheroes” will also be honored during the festivities, the Rev. Maressa Pendermon and Maria Helena Dolan.
The lunch is a perfect way for ZAMI NOBLA to re-introduce its members and its mission to the Atlanta LGBT community.

“We also understood acutely that this is a very youth-oriented community and when people reach a certain age, the perception is they shouldn’t be in the clubs or they shouldn’t be out doing certain activities, and a lot of people self-isolate,” Adams said. “We wanted to create a whole new paradigm for aging.”

Adams said scholarship applications for 2017 will be available in March, and the deadline to apply is in July.

The Audre Lorde Scholarship Luncheon
Saturday, Feb. 18 at 12 p.m.
The Commons Performing Arts Hall at First Congregational Church of Atlanta, 125 Ellis Street, Atlanta
Tickets are $35 general admission and $15 for students and those ages 65 and older; available at www.zaminobla.org