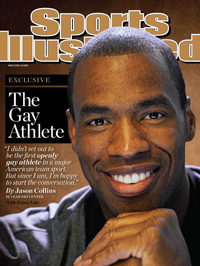 Jason Collins of the Washington Wizards comes out in the May 6 issue of Sports Illustrated, becoming the first gay athlete in major U.S. men’s professional sports to come out during his career.

“I’m a 34-year-old NBA center. I’m black. And I’m gay,” Collins writes in the first-person essay, which is online now.

“I didn’t set out to be the first openly gay athlete playing in a major American team sport. But since I am, I’m happy to start the conversation. I wish I wasn’t the kid in the classroom raising his hand and saying, ‘I’m different.’ If I had my way, someone else would have already done this,” he writes. “Nobody has, which is why I’m raising my hand.”

Collins has appeared in nine playoffs in 12 NBA seasons, playing for six teams, including the Atlanta Hawks. He writes that he began thinking about coming out during the 2011 NBA player lockout, which disrupted his routine and took away “the distraction that basketball had always provided.”

The recent Boston bombing also played a role in his timing, he says.

“The recent Boston Marathon bombing reinforced the notion that I shouldn’t wait for the circumstances of my coming out to be perfect,” Collins writes. “Things can change in an instant, so why not live truthfully?”

Collins describes in the lengthy essay how he came out to several family members, including his grandmother and his gay uncle, and says he didn’t come out sooner due to “loyalty” to his team.

“When I signed a free-agent contract with Boston last July, I decided to commit myself to the Celtics and not let my personal life become a distraction,” he writes. “When I was traded to the Wizards, the political significance of coming out sunk in. I was ready to open up to the press, but I had to wait until the season was over.”

Collins, who states that he did not come out to others in the NBA before publishing the essay, even addresses the locker room issue.

“The biggest concern seems to be that gay players will behave unprofessionally in the locker room. Believe me, I’ve taken plenty of showers in 12 seasons. My behavior wasn’t an issue before, and it won’t be one now,” he says.

Collin also says that he will focus on winning and doesn’t mind if fans heckle and boo.

“I’m a veteran, and I’ve earned the right to be heard,” he writes. “I’ll lead by example and show that gay players are no different from straight ones.”

The Sports Illustrated package also includes an explanation of how the interview came together (a great read for the last paragraph) and a response from Jason Collins’ twin brother, Jarron Collins, who also played in the NBA.

Collins played for the Atlanta Hawks from 2009 to 2012. He signed with the Boston Celtics in July 2012 and was traded to the Washington Wizards in February 2013.

Today, the Atlanta Hawks issued an official statement praising Collins and declaring, “we are proud he wore our jersey.”

“We have great respect for Jason and his message today. Creating an environment where we support, respect, and accept our players’ individual rights is very important to us,” Hawks Managing Partner and NBA Governor Bruce Levenson said in the statement. “Jason represented everything that we look for as a member of the Atlanta Hawks and we are proud he wore our jersey.”

“Our focus will always be on bringing in players that can contribute to the greater good of the Atlanta Hawks and ensuring that we create the most accepting, respectful, and productive environment for players to succeed,” said Danny Ferry, Hawks president of basketball operations and general manager.

Prior to Collins’ essay, professional male team sports have remained a last bastion of the closet. American male professional athletes who have come out have done so after retiring or when announcing their retirement.

In 2007, John Amaechi became the first NBA player to come out, but he had already retired.

Soccer player Robbie Rogers, a member of the U.S. Men’s National Team, came out in February, but announced his retirement at the same time, although Rogers told ABC News in an April 15 interview that he might go back to playing.

In recent weeks, gay-supportive straight NFL players have suggested that one or more professional football players are poised to come out, but that has not yet happened.