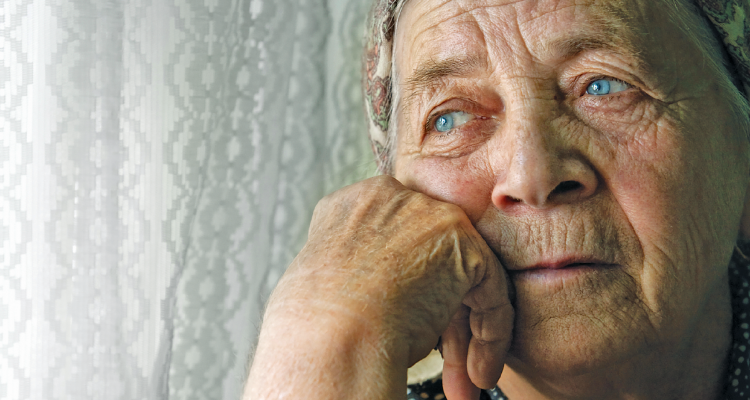 NLGJA Award Winner “The Thief of Self”

Berlin Sylvestre
Community
June 28, 2019
Berlin Sylvestre won the Excellence in Feature Writing, Non-Daily Award for this piece. Congratulations, Berlin!
Granny Pearl shuffled into the living room with unfocused eyes and mouth agape, startling me. I was a teenager visiting a friend’s house for the first time, and I had no idea we weren’t alone. The wiry-haired woman, naked from the waist down, carried an old, red purse and turned to me.
“Where’s my Mama?” she asked, her voice a quiver of panic. Given her state of undress and the fact that she seemed much too old to have a living mother, I knew something was terribly wrong. She didn’t even seem to acknowledge that I was a stranger in her house. She turned away from me and continued to shuffle in a tight circle. I was completely unable to speak, hoping my friend would return from the kitchen and alleviate the old woman’s anxiety.
He came back in short order and his normally friendly visage changed to one of anger once he saw his great-grandmother out of her room. Just a teen himself, he screamed, “Granny Pearl, your mother’s dead! How many times do I have to tell you that?” He then grabbed her arm and lead her away, far too roughly for her brittle frame. She tried to make out words as she was pulled back into her room, but they came out a garbled mess. I wanted to cry. She was frightened, and so was I — not at her, of course, but at my friend’s cruel reaction to what was clearly a very sick, elderly woman.
“She’s got old-timer’s,” he explained, a common play on Alzheimer’s, a disease that withers away at one’s mind, one’s very memories and ability to live a normal, independent life. Then he smirked, “She’s annoying as hell.”
1994. That was the last time we hung out.
***
Present day:
Sometimes, Steve Caster’s mother thinks he’s her dad. On other occasions, he’s her husband or brother. He is patient with her, and understands that it’s not something she can help. Though he feeds her and cares for her as one might a child, he counts the little blessings, like a brief moment of clarity, when some of the fog that clouds her very sense of self fades for a moment, and she is able to see him as her son again — and how, in turn, he can talk to his mother once more.
The 54-year-old Roswell resident lives with his 52-year-old partner of 11 years, Joel Feuer, along with both of their mothers, who are living with Alzheimer’s disease. Steve’s mother is 93; Joel’s mother, 79. In a single house, they tackle the ups and downs as they come, rolling with the punches.

Joel echoes the earlier sentiment. “Sometimes [my mother] thinks I am her cousin,” he tells Georgia Voice. “Or she thinks I’m my dad. Only every now and then am I her son.”

Dealing with degenerative disease is something Steve has undergone with his own father, something his dedicated Joel witnessed alongside him for many years. So when the news came that Steve’s mother was faltering under a sickness of her own, Joel didn’t hesitate to let Steve know it was OK to bring his mother into their home for care. Through another twist of misfortune, Joel’s own mother began her own battle with Alzheimer’s.
So, around six years ago, the pair was fortunate enough to have the opportunity to purchase a home with a master bedroom on the main floor for their mothers, and a master bedroom upstairs for themselves.
“I don’t know how we get so lucky that such great options appear before us when they are needed most,” Joe says, clearly thankful.
“[Joel] already knew I would be asking him at some point, because it was the natural next step to take when she could no longer live alone,” Steve says. As Joel had recently lost his own father, he knew more than most that assisted living wasn’t the best option. Speaking of his own mother, Joel says, “I know if she eats, how much she eats and drinks, if she has used the bathroom. Plus, I don’t have the added stress of trying to get to the assisted-living facility in time for meals — that was another thing: If, after about 30 minutes, the residents didn’t eat their food, they would just take it away. Also, some of the CNAs seemed a bit rough.”

Steve with his mother, Doris

“With Alzheimer’s, we had no way to know what was happening when we were not with her, which was not that much,” replies Steve. “Even with a visit every day, there are countless hours of not knowing what’s happening, and she isn’t even able to tell us.

“We brought her home and now, [Joel’s mother] and my mom share a large master bedroom. We installed a hospital curtain for privacy as needed. They are doing fine together. I imagine it works especially well since both are quite far into their Alzheimer’s journey.”

Neither of their mothers, once very active in both mind and body, are able to walk now. Wheelchair-bound, the ladies rely on the care of their sons, caregivers, five-days-a-week hospice help, and a generous sister who lets the gentleman take a break each Sunday.
“Once the caregivers leave, I give my mom one more dose of medicine around 7pm, and then change her around 10:30pm before I go to bed,” Joel says. “She is then fine until the morning.”
Seeing the neurocognitive degeneration in their mothers is literally robbing the pair of two women that mean the very most. Recalls Steve: “[My mother and I] used to have great conversations, walks through our neighborhood, puzzle making, meals, and shopping together. She was an avid reader and enjoyed her book time. We laughed often and enjoyed every minute of our time together. We enjoyed music and piano playing. We’ve been the best of friends my whole life.”
Now, though, books are a thing of the past. In fact, it was her waning ability to read that helped tip off Steve’s family that something had gone awry.
“We noticed she kept the same books out,” he says. “Eventually, she stopped reading because she couldn’t remember the last chapter at all. After starting at the beginning repeatedly, she finally just stopped reading altogether.”
Also worrying was the fact that she became forgetful and would repeat the same questions over and over, often even forgetting where she was going when she was behind the wheel.

Joel with his mother, Rochelle

Joel’s mother lead a full life until Alzheimer’s stripped her of everything she’d built with her family.

“My mother helped my dad at his dental practice,” he says. “She would do some chair-side assisting and office management. She was also a homemaker and took care of the household by cooking, cleaning, and taking care of me and my sister.” Now, though, Joel says she can’t even stand on her own, and has trouble remembering who exactly the man who calls her Mother is.
Joseph Gardeno*, 65, of Atlanta, has a similar story: “When my wife was diagnosed, she demanded that I keep it hidden from the family. She kept asking me if it were really true, as though she both believed it, but refused to believe it. At some point, the family began to see what she was going through, and almost simultaneously, she stopped caring about them knowing [about her diagnosis]. She didn’t want everyone to know — just them.”
His eyes turn downward. “I’ll be honest: I went through a period of absolute and complete rage that the woman I loved, the woman I married was disappearing before my very eyes. It made me question my faith.” But Joseph says the anger didn’t last forever. “It went away over time — I just had to accept reality and deal with what was coming. Still, I sit and think sometimes, ‘We can never have that vacation to Australia together; I can never again expect a Christmas or anniversary present from her, because she no longer remembers things like that.”
Joseph and his wife were floored by the news, as both are in their mid to late sixties. “She’s having trouble putting words together. Already. But like I said, you learn to live with it.”
***
Don Terry, an out, gay man living in Alpharetta, is helping the Alzheimer’s Association — a national organization — start an LGBTQ Alzheimer’s support group here in Atlanta.
Don, 52, is currently working as a volunteer with the Georgia chapter of the Alzheimer’s Association after undergoing training in February. Additionally, he gives group presentations to companies who either work with individuals living with dementia and/or Alzheimer’s, or those who have a vested interest in the subject. When I ask him about the “and/or” portion of his “Alzheimer’s and/or dementia” statement, he says that Alzheimer’s falls on the dementia scale.

Don on the move