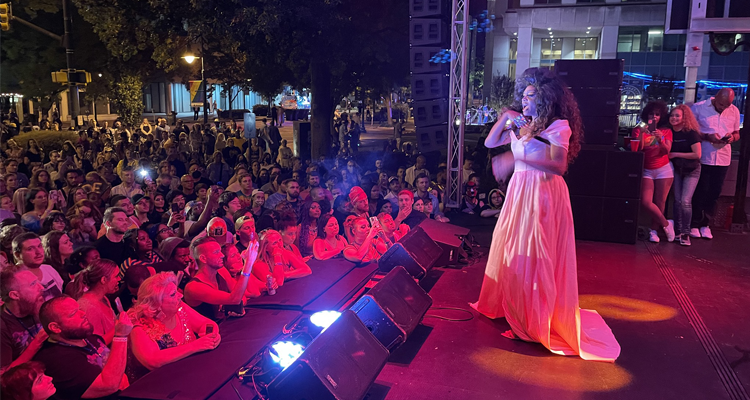 Bob the Drag Queen performed in 2021 at Outfest Columbia in Columbia, South Carolina. / Photo via Facebook

Happy Pride month! While Atlanta Pride is still months away, there are plenty of Pride festivals and celebrations happening across Georgia and the Southeast. So, pack your bags, head out of the city, and wave that rainbow flag!

Columbus Pride kicks off with the Mr/Ms/Mx Columbus Pride Pageant on Friday at 7pm before the festival on Saturday from 9am to 10pm. Both events will be held at 1100 Broadway. Learn more at colgaypride.org.

The Athens Pride and Queer Collective is hosting their first-ever Athens Pride Parade on June 12 in Downtown Athens at 1:30pm! The parade route will begin near Creature Comforts on Hancock, make a right on Hull, a left on Clayton, a left on College Avenue, and ends at Thomas Lay Park. At the end of the parade, there will be a BBQueer at the park featuring bands, activities, and barbecue (with vegan options!). Learn more and register for the parade at athenspride.org.

August Pride begins with Beats on Broad: Purple Party on Friday at 6pm. For a $10 cover, dance the night away at Augusta Common. Then, the festivities kick off with the Augusta Pride Parade at 10:30am on Saturday. The parade will line up on Jones Street, between 10th and 11th streets. The festival then begins at 11am at the Augusta Common. Round out the weekend with the Ain’t Misbehavin’ Pool Party at noon on Sunday at the Parliament Resort. 21+ with a $10 cover. Learn more at prideaugusta.org.

Gwinnett Pride will be happening from 11am to 7pm at Lillian Webb Park. Gwinnett Pride is presented by the Visibility Club, created by Rolando Guzman, with a mission to increase visibility and foster community for LGBTQ people beyond Atlanta proper. As a result of this work, Gwinnett County recently announced a declaration marking June as official Pride Month, and this year for the first time, Norcross City Hall is lit up in rainbow colors in support and celebration of Pride Month. The entertainment lineup includes the Atlanta Women’s Chorus, Alma Mexicana, Exquisite Gender, Ashton May, Francisco Vega, L. Marie, and more. For more information, visit gwinnettpride.us.

Pride in the Southeast

Central Alabama Pride has a whopping twelve days of Pride events happening this year, spanning everything from Pride skate night on June 7 to the Royal Pride Prom for LGBTQ youth on June 10. The festivities conclude with a nighttime Mardis Gras-style Pride parade on June 11 at 8pm, stepping off from 32nd Street South, and PRIDEFEST on June 12 at 11am at Linn Park. Learn more at centralalabamapride.org.

Key West Pride weekend is chock full of events like drag shows, pool parties, and tea dances from early morning to late night. The official Pride Street Fair will be held on Saturday from 10am to 5pm on Duval Street, and the parade will be held at 5pm on Sunday. Find the full line-up of events and learn more at gaykeywestfl.com/pride.

Outfest Columbia will feature “RuPaul’s Drag Race” season 14 winner Willow Pill, plus a lineup of other performers and vendors at The Vista, all starting at 1pm. Learn more at scpride.org.

The two-day Nashville Pride festival will begin at 11am each day at Bicentennial Capitol Mall State Park. The festival will feature live entertainment across three stages, a kids and family zone, youth area, community art, and over 225 vendors. The parade kicks off on Saturday at 10am at Broadway/8th Ave. Learn more at nashvillepride.org.

Out! Raleigh Pride, organized by the LGBTQ Center of Raleigh, will feature speakers, performers, and vendors in downtown Raleigh’s Fayetteville St. district. Learn more at outraleigh.com.