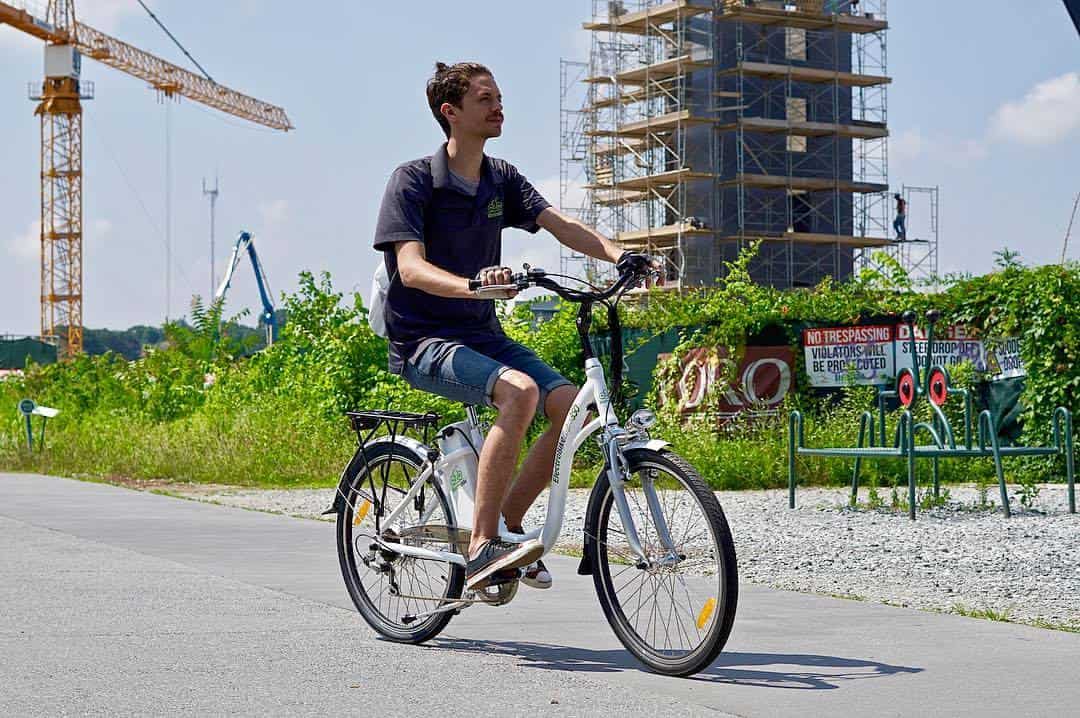 Not our jam: How to bypass the traffic, Atlanta-style

Atlanta’s growing again. Whether it’s luxury apartments in Buckhead, the judicial complex coming up near the Statehouse, or merely the neverending creep of Brookhaven, projects to expand the city are moving at unbelievable speed. In fact, about 50 major projects are underway or proposed for the city over the next few years, luring new businesses, new residents — and new traffic! With our highways already miserably choked, it’s hard not to imagine that the growing population — approaching 9 million by 2046 according to one study — won’t make things significantly worse. The good news is there are more ways than ever to get from point A to point B without experiencing the horrors of the Connector.

The scooter saw a major surge in popularity a few years ago when Vespas — with their cutesy compact design and retro colors — had everyone fantasizing about zipping through the streets “Roman Holiday”-style. The trendiness may have died down, but scooters — and their lower octane cousins, mopeds — remain great options for people looking to travel around town without the high fuel cost. Mopeds tend to have an engine size of 50cc or less and a top speed of 28 mph, compared to scooters which can reach engine sizes of 250cc and speeds of some 75 mph. Either can fit into smaller spaces, making them ideal for sliding past traffic as well as parking in tight spaces.

If you’ve ever fantasized about biking to work, but were put off by the concept of arriving to your desk drenched in sweat, an e-bike might be the perfect option for getting around town. These bikes — check out ElectroBike Georgia for some solid choices — incorporate an electric motor which, depending on the model, can assist your pedal power or pretty much replace it. The result is a less sweat-intense method of transportation that does away with the need to pay for parking, registration or expensive gas (most e-bikes are battery powered). And when you’re ready to put in a little sweat equity, flip a switch and you’re back to an old-fashioned two-wheeler.

Speaking of bikes, bike-share programs have exploded in the last few years and with good reason: With prominent docking stations and easy-to-navigate fee systems, bike sharing programs are increasingly convenient to use. Several locales, including Atlanta, have implemented bikeshare systems, which let people hop on, pedal to their destination and deposit their bike at a convenient station for as little as 50 cents an hour. Atlanta’s Relay Bike Share program has had at least 25,000 riders to date, according to a March report. With the BeltLine growing gangbusters and city officials planning to expand the number of city biking lanes, it’s a no-brainer that a shareable bike is a great option for traffic-free, no-strings-attached transportation around the city.

Metropolitan Atlanta Rapid Transit Authority — MARTA — is estimated to carry about nine percent of daily work commuters to and fro. And the system is on the upswing: MARTA recently hired Jeffrey Parker, a former executive who’s managed transit system operations in Massachusetts and Connecticut, to oversee a major period of expansion. Growth could include new bus and rapid transit service along Georgia 400 and South Fulton Parkway, as well as to parts of that public transportation vortex known as Cobb County. Bonus: Pre-tax payroll deductions can cover your transit costs while reducing your taxable income. Suddenly hopping on MARTA seems worth a second thought!

Legal challenges or no, ridesharing companies seem here to stay. If you’ve somehow managed to never hear of Uber or Lyft, these everyman taxis work by allowing you to use an app to essentially issue an open-ended call for a ride. Unlike traditional cabs, there’s no hailing, no cash exchange (that part happens in the app) and many say it’s a much more pleasant experience in general. But what people like the most is the low rates and near endless availability. Unfortunately, rideshares aren’t immune to traffic. But it’s sure easier to deal with traffic when you’re not the one driving!

It might not be ideal for long journeys, but if you’re just looking for a fun way to get to the park or to your job nearby, an electric longboard could come in handy. An electric longboard is something like a skateboard fitted with a motor; it often uses a handheld throttle to control direction. Since popping onto the scene in the late ‘90s, these battery-powered rides have become popular due to their lightweight and fast speeds of up to 25 mph. Hop on one and you’ll be bypassing the Peachtree Street crawl in no time. If you’re lucky, you’ll run into the mystery longboarder who darts around West Midtown with his adorable dogs in tow! Does anybody know who that guy is?!