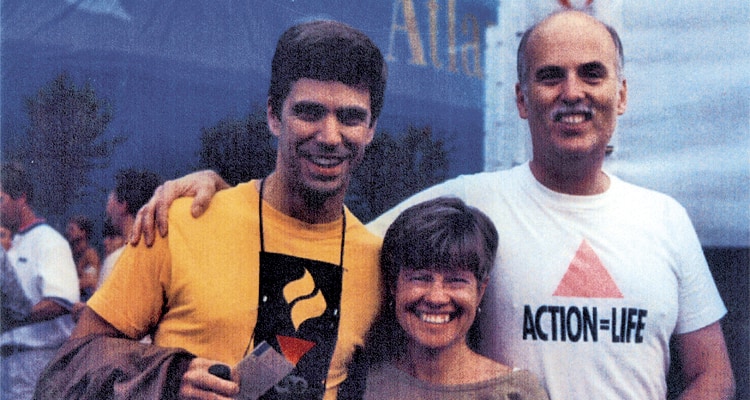 Here’s the second installment of “Greatest Hits” from the Gay ’90s of landmarks in our LGBTQ long march to freedom here.

The greatest advance in the ’90s is the arrival of protease inhibitors in 1996, making AIDS a chronic condition and not a death sentence.

For me, AIDS hit in 1991, when I knew about 25 men who died that year. After working out at the Colony Square gym, I sat in the atrium often crying uncontrollably, fearing I would lose my mind, although I am HIV negative.

Finally one day I heard a voice, “Dave, you’ve lost your mind, don’t worry about it anymore. There’s no way you can stay sane through this. Just do what you have to do for those you care for.” Thus I took the focus off myself and onto those who needed help.

Ironically the greater visibility AIDS gave us created a renaissance in the arts. Actors Express exploded here founded by two gay men Chris Coleman and Harold Leaver and set a new bar both for theatre excellence and no holds barred depictions of gays and lesbians (earning the nickname “Actors Undressed” for serious eye candy).

The pinnacle of the Express saw the debut of the musical “The Harvey Milk Show” in 1991 by Atlantans Dan Pruitt and Patrick Hutchison, which later became the showpiece of the Cultural Olympiad during the 1996 Olympic Games here.

At Seven Stages Theatre, playwright Jim Grimsley stoked the burgeoning scene, world premiering his surreal meditations on gay life “Mr. Universe” and “Math and After Math”, along with an adaptation of his novel “Dream Boy.”

Part-time Atlantan Elton John and the homegrown the Indigo Girls perform what seems an impromptu jam in Piedmont Park for our first AIDS walk in 1991.

In 1993 the beleaguered Theatre in the Square in Marietta becomes the flashpoint for right-wing nuts when TITS stages gay playwright Terrence McNally’s “Lips Together Teeth Apart”, which only mentions gays in passing. Still, the Cobb County Commission passes a resolution informing gays and lesbians they’re “incompatible with the values of Cobb County” (counties have values?!) and cuts off funding for the arts to boot.

Well, Native Atlantan Pat Hussain and her partner in crime Jon Ivan Weaver seriously object and assert that if that’s how they feel, no Olympic events should occur in Cobb County. Creating Olympics Out of Cobb and mobilizing hordes of volunteers, their David defeats the Olympic Goliath, and Cobb is bereft of Olympic glory in 1996.

Tragically following the Olympic Park bombing, fanatic Eric Rudolph targets the lesbian-owned The Otherside on Feb. 21, 1997, and although no one dies, the attack gradually puts the Otherside out of business.

A happier ending awaits Queer Nation, when Lynn Cothren and others organize boycotts of Cracker Barrel restaurants, as they fire all their LGBTQ employees, including cook Cheryl Summerville who has no customer contact. Cheryl ends up on Oprah and featured in the documentary “Out At Work.” Moreover, activist Carl Owens organizes our folks to buy small stock in Cracker Barrel and eventually forces them to stop firing us, and get back to work.

After what feels like forever, Cathy Woolard is the first out person elected in Georgia, to the Atlanta City Council in 1997. In 1999 Kecia Cunningham becomes the first openly lesbian black woman elected to the Decatur City Commission.

In 1995 Presbyterian minister Erin Swenson makes world history when she is the first mainstream minister to transition and keep her ministry, “for the first time in Christendom” as our enemies would have it. Coinciding is trans woman Shelley Emerson leading the women’s group Fourth Tuesday, and also being the cover girl for Atlanta Magazine in a feature-length profile. You go girls.

Completing a tumultuous decade is Georgia’s own Supreme Court, which on Nov. 23, 1998, at last, overturns the 156-year-old ban on sodomy, in a heterosexual divorce case no less.

Dave Hayward is the coordinator of Touching Up Our Roots, Inc.: Georgia’s LGBTQ Story Project. Find them at www.touchingupourroots.org.