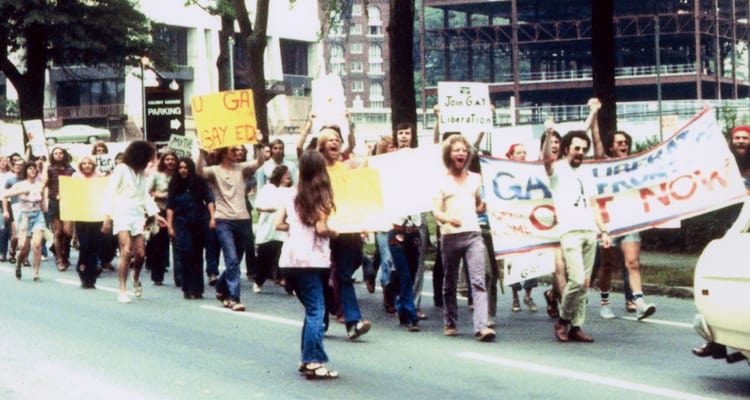 Once Upon a Time in Mecca

Here’s a “Greatest Hits” of our Georgia LGBTQ long march to freedom. Feeling like one of the survivors of a slasher flick (sorry, folks), nevertheless, I’m eager to spill the stories that give our community the freedom it has today to love and be loved fearlessly.

Arriving in October 1971, I instantly became a Yankee carpetbagger to the co-chair of the Georgia Gay Liberation Front, Bill Smith, who co-led the GGLF with proudly bisexual Judy Lambert. Judy took flack for supporting the GGLF, which led to Georgia’s first lesbian group the Atlanta Lesbian Feminist Alliance forming in 1972.

Fresh from co-creating the Washington, D.C. Gay Liberation Front in 1970, I thought Atlanta would be a fresh fun horizon after graduating from George Washington University. Native Atlantan Bill Smith berated me “David! If you go downtown to Five Points and shout out Sherman’s name, you will be torn limb from limb!”

In 1972, the GGLF was a minority of a minority, and we were bodily ejected from two gay bars for promoting Pride. “We don’t want any of that radical shit in our bar!” the Cove’s Frank Powell thundered, as one of our brothers went flying through the air out of the Cove’s saloon doors.

Our political protest march was peaceful, and unlike the first Pride March in 1971, we persuaded “the city too busy to hate” to give us a permit to march in the streets. The GGLF’s Berl Boykin told me that in ’71 there were 125 marchers, “I know I counted them twice!”, so they marched on the sidewalks and stopped for every traffic light. Also, the Georgia chapter of the ACLU rebuffed the GGLF’s call for help: “You are not a minority,” they scoffed.

When we didn’t burn Atlanta down again after 1972, the bars slowly came around, and we registered voters at Bulldogs and the Sweet Gum Head bar by the end of the ’70s.

Also in 1972, we celebrated our first openly gay anything, when Mayor Sam Massell named GLF stalwart Charlie St. John to the Community Relations Commission. The next year Bill Smith replaced him, so we had some seats at some table, along with Abby Drue, who was the first “out” person at City Hall.

There was Hell to pay for Mayor Maynard Jackson, the first black mayor of a major Southern city, as he declared Gay Pride Day that year. The Southern Baptist “Citizens for a Decent Atlanta” demanded his impeachment, and we picketed the Baptist church next to Phipps Plaza. Jackson stayed mayor, but in 1977 he fearlessly announced “Human Rights Day.”

Perhaps we brought the Bible Belt out of bondage to gender-conforming norms. At least we’re not usually denounced from pulpits here now.

Native son Gil Robison invited candidates to speak to us later in 1977, creating the LGBT vote, and he and friends founded First Tuesday, the first LGBT political action committee.

A year later, our little engine was hijacked when alt-right reactionary Anita Bryant became guest of honor at the Southern Baptist Convention at the World Congress Center, riding her “Save Our Children” (don’t you love these names?) crusade to rescind LGBTQ rights ordinances across the country. But we had our own Selma moment, as for the first time straight allies marched with us like white allies did with civil rights activists in 1965.

And we raised so much money fighting Save Our Children that we started our second Atlanta Gay and Lesbian Center. Thanks to our poster child Anita!

Lesbian firebrand Maria Helena Dolan delivered her “I come to you today as a defiant dyke!” challenge at our rally at the World Congress Center, and we had thousands of people joining us in pandemonium.

In 1979. our little Mecca became the Southeast hub for the first National March on Washington for Lesbian and Gay Rights in October that year.

It was a dark new dawn in November 1980 when Ronald Reagan lambasted Jimmy Carter in a landslide, and our Democratic victory party began to awaken. Slinking home we chirped, “See you in the camps!” Seven months later our black humor became reality when AIDS – first called Gay Related Immune Deficiency or GRID – was identified. Suddenly there were serious calls for quarantining, and even branding, all gays and lesbians as a public health menace.

At the end of 1982, designer Graham Bruton helped form AID Atlanta, which hosted a slideshow at Colony Square depicting the ravages of Kaposi’s sarcoma. “Everything has to change,” I realized, and indeed safe sex (say what?) and condoms became the new normal for gay men.

Dr. Jesse Peel and others founded several AIDS organizations, and the buddy program to help people living with AIDS – not AIDS victims – began at AID Atlanta.

Even those who cared were terrorized, and in 1983 we hosted a dinner party for our brothers with AIDS. Should we throw out the plates after the party, we wondered. Neither the state of Georgia nor Ronald Reagan were much help. Local activists and doctors like Rick Hudson and Bernie Short and John Kopchak lobbied the Georgia General Assembly to keep draconian penalties from passing, and Gil Robison became the first openly gay and AIDS lobbyist at the Gold Dome.

In February of 1986, we made a human chain around the First Baptist Church at 5th and Peachtree to decry Reverend Charles Stanley declaring AIDS “God’s judgment against sinners.” Groups like PFLAG lead by Judy Colbs and others became key allies, and ironically AIDS began bringing the LGBTQ community and the straight community closer, as well as gay men and lesbians.

In October we packed the Atlanta City Council to defeat the repeal of our gay rights ordinance, while the Citizens for Public Awareness railed, “Do you want Atlanta turned into another San Francisco?” But you are Blanche, you are.

In 1986, the Supreme Court upheld Atlantan Michael Hardwick’s conviction for sodomy – arrested in his bedroom, no less – and thus upheld all sodomy statutes in states that still had them. Such an insult became the catalyst for the second National March on Washington for Lesbian and Gay Rights in October 1987.

Atlantans Ray Kluka, director of the Atlanta Gay and Lesbian Center, and Maria Helena Dolan were among hundreds arrested on the steps of the Supreme Court in a mass die-in.

At the March the Names Project AIDS Memorial Quilt (headquartered in Atlanta since 2001 under CEO Julie Rhoad) made its national debut, and visitors grieved like people from another culture hugging and sobbing above the panels. Finally we had an outlet for our agony, and those we loved are enshrined in the world’s largest folk art project.

Spurred by the Supreme Court Hardwick fiasco, Winston Johnson comes out to his dear friend Coretta Scott King and enlists her into actively advocating for LGBTQ rights, as does her longtime assistant Lynn Cothren. Before she knows it, Ms. King is the keynote speaker at the Human Rights Campaign dinner in New York, and guest of honor at the first Atlanta HRC dinner in 1987.

Playwright and actress Rebecca Ranson who led SAME, the Southeastern Arts and Media Education foundation, premieres “Higher Ground” featuring a cast of actors living with HIV at the World Congress Center, in tandem with a display of the Quilt. Ranson also wrote the first play about AIDS, “Warren” about her friend Warren Johnson, which opened at Seven Stages Theatre in 1984.

Out of the Democratic National Convention held here, the DNC LGBT caucus steamrolls an Atlanta ACT UP FIGHT AIDS chapter. We picket Circle K gas station for refusing to stock SPIN Magazine with condoms on the cover, and also “die in” at the Governor’s mansion.

Richard Rhodes and Melinda Daniels are the first gay man and lesbian woman to be delegates – from Georgia – to the Convention, and Rhodes also is a delegate to the 1992 DNC. For good measure, he and Gil Robison are the first openly gay men to run for office here in 1988 for the Georgia House of Representatives.

Neither win, but now we have an LGBT caucus of five in the Georgia House of Representatives.

When activist icon Ray Kluka passed from complications of AIDS in 1989, a park honors him at Monroe Drive and Greenwood Avenue. Along with the John Howell Park on Virginia Avenue, Ray and John are the only two gay men who have public spaces named for them in Georgia.

As Rebecca Ranson says, everyone does everything they can to help, and our loved ones keep dying. They live in us and we celebrate them.