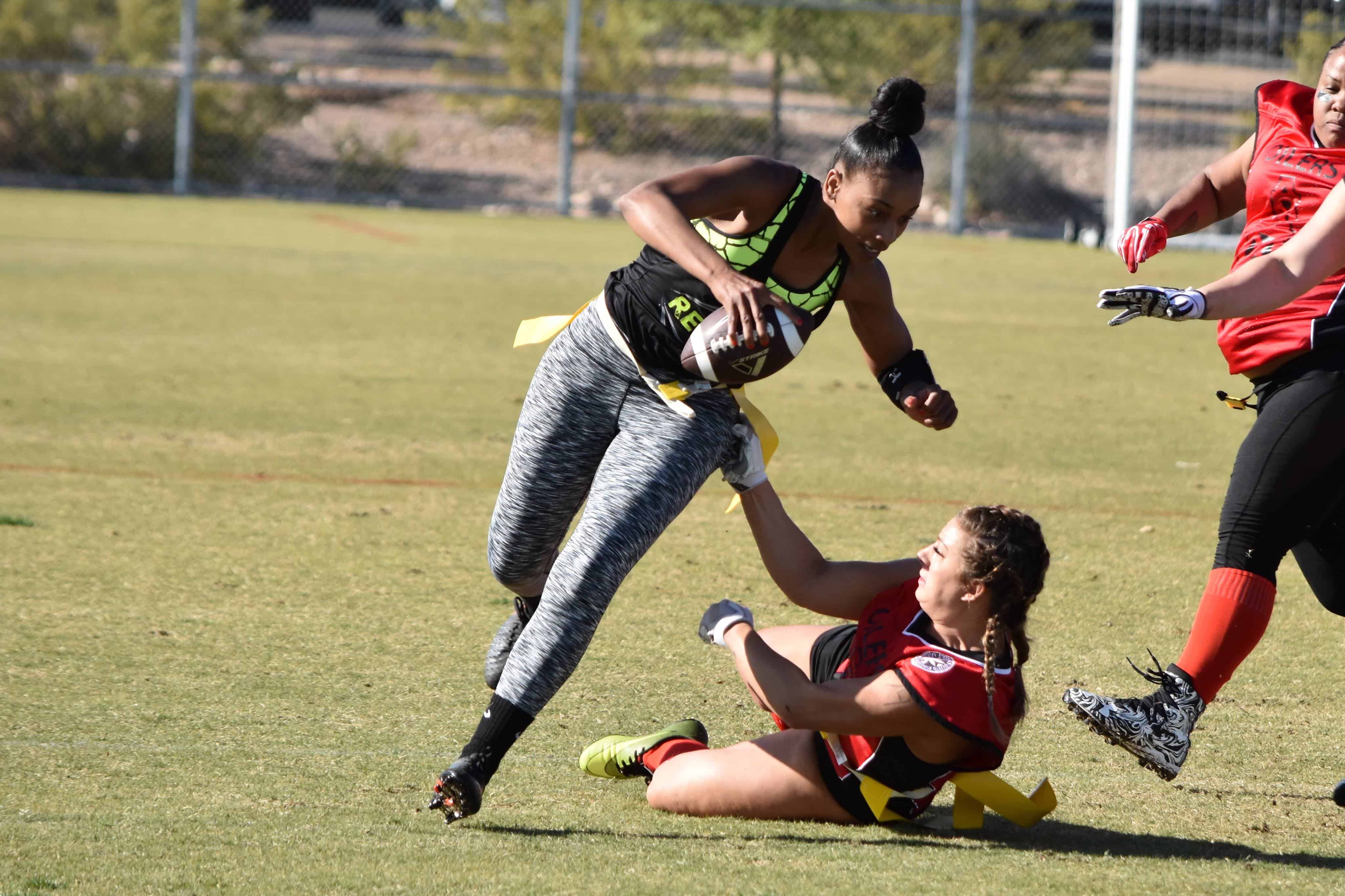 Passion for football runs deep in America and nowhere does that passion run deeper than here in the South. Georgia is home to our beloved Falcons, University of Georgia Bulldogs, and the Georgia Tech Yellow Jackets. With football being such a ubiquitous piece of our culture, where does a woman with a passion for the “sport of kings” go? She goes to the Atlanta Women’s Flag Football League — that’s where.

So, what exactly is flag football? While flag football is by no means a non-contact sport, it has gained traction over recent years due to its lowered risk of injury. With national concern over concussions and long-term brain injury for those who play full-contact sports, flag football is a viable alternative. The sport does not allow a player to be tackled to the ground while running a ball. Instead, a player has flags attached at the waist, and the defensive players must remove the flag to cause a stoppage in play. This method allows for the fun and complex experience of team sports with much less concern over life-altering head injuries. Flag football is now played worldwide and is well on its way to becoming an Olympic sport.

In 2007, the Georgia Women’s Flag Football League folded. Unsure of the future of women’s football, Mashonda Gilmore and Zeric Foster founded the Atlanta Women’s Flag Football League (AWWFL) in order to keep the sport alive. They combined their passion for flag football with sharp focus and dedication to “continue the legacy of flag football for women in the Atlanta area who have a true passion to excel in a competitive environment.” The league is focused on furthering the sport by developing and coaching elite flag football players.

The AWFFL has opportunities for players of all levels, which is very encouraging. Many women grew up actively discouraged from sports like football, meaning their lack of experience might cause hesitation to ever start, were it not for this club. The recreational level is welcoming to someone who has never picked up a football in her life. The experience levels rise to a seasoned athlete looking to further her skills and beyond.Coaches are specifically trained to encourage and foster athletic development in women. The league is not a social club or specifically a LGBTQ league, but rather a training ground for the future of all women’s flag football. It is worth noting that the AWFFL is open and welcoming to all members of the LGBTQ community. Mashonda takes the sport seriously:“This is not powder-puff football.” The coaches focus on fundamentals of the game as well as playing in a safe and welcoming environment.

The league is very active and teams are headed to the Ballin’ in the Bayou tournament in New Orleans, Louisiana on September 22nd as well as the 11th annual Flag Football Invitational benefiting the Lynn Lewis Foundation on October 20th here in Atlanta. The Lynn Lewis Foundation is a non-profit directed by Mashonda Gilmore, and was created in 2007 to increase awareness of breast cancer and support families and caregivers affected by the disease.

A recent study by the Women’s Sports Foundation concluded that by the age of 14, girls drop out of sports at twice the rate of their male counterparts. Reasons range from lack of adequate facilities for female sports to LGBTQ discrimination. The study also found that girls who participate in sports report a more positive body image as well as higher levels of family satisfaction, in both single- and dual-parent households. Atlanta can count itself fortunate to have this organization supporting the athletic development of women through flag football.

On May 19th, the “grrridiron girls” flag football camp was hosted by the AWFFL and Jen Welter. Jen made history in 2015 as the first female coach in the National Football League for the Arizona Cardinals. A girl’s league is currently being developed in hopes of bringing the sport to a new generation of players.
In a society that steers young girls toward soccer, dance, or cheerleading as the few acceptable sports, AWFFL is determined to show that girls can play football just as well as any boy can.
If you have always dreamed of playing on the gridiron or are looking to join a team of determined and talented athletes, please contact the Atlanta Women’s Football League at awffl.net. For more information about the Lynn Lewis Foundation visit LynnLewisFoundation.com.