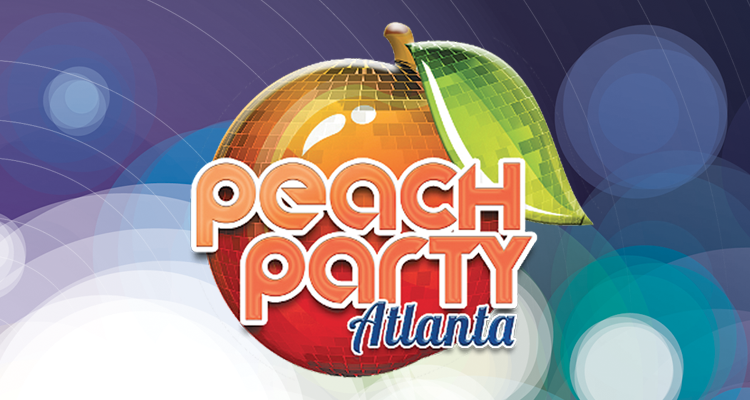 There’s no question that Atlanta has become one of the top circuit scenes in the country over the past decade. It’s evident when you walk into Heretic Atlanta. On either side of the entrance doors, a slew of posters highlights top DJs from across the country and around the world.

There’s music blaring from Heretic and next door Xion almost every weekend, but one weekend, in particular, takes circuit to the next level. It’s called Peach Party. “I’m really happy it’s taken off the way it has,” said Promoter, Keith Allen Young. “Everywhere, no matter where I go, people know about Peach Party.”

Young thought up the idea almost a decade ago to satisfy the need for a circuit weekend during Pride Month. Since Atlanta Pride fell at the end of the year in October, he knew Peach Party in June would be a hit. This year, because of World Pride in New York, he moved the weekend into May.

The change allows Young to still bring in popular talent from around the country and world without interfering with a packed event lineup for World Pride 2019. Locals see it as a preview of what’s in store. Peach Party DJ headliners, Tom Stephan from the United Kingdom and Isaac Escalante, are both set to headline one of World Pride’s largest parties, Alegria WorldPride 2019.

“I love to bring new talent in but for big weekends where people are paying a fortune, it’s hard to take chances with somebody new, if people are going to respond or travel to the city for someone new,” said Young. “You go for headliners that people recognize.” He’s also brought in Atlanta’s very own Seth Breezy to jump-start the party Sunday evening at TEN Atlanta. Other DJs including Deanne, Dee Martello, Cindel Coss, and Eddie Martinez, have worked closely with Young in the past.

“I listen to what people want and I look at prior sales,” he said. “I know which DJs I book and who’s going to see them and who’s not.”

Young, who’s working on his 400th event in Atlanta, is optimistic about Peach Party’s future. For the past two years, his team has worked non-stop to open up a new venue to give Atlanta circuit it’s official new home. The club’s called Future and it’s set to open later this year. “We’re hoping it’s open by Pride,” said Young.

It’ll solidify his role in the circuit scene here in Atlanta for at least another ten years, he says. That means you can expect Peach Party, Atlanta Pride and Joining Hearts weekend to grow into a worldwide spectacle that will cement Young’s parties into circuit history.

One-on-One with the Peach Party DJs

It’s your first time in Atlanta and first time DJing here. What are you expecting from the circuit scene?

“To be honest, I’m not very familiar with the Atlanta circuit scene. But I do have a good friend in London who is working a great deal these days on films in Atlanta and he keeps telling me what a wonderful city it is. I am very excited to have the chance to visit and DJ there.”

What are you looking forward to most about Peach Party and how are you preparing for the crowd?

“As always, I’ll be scouring the internet for sexy new beats, and finding ways to mash up or mix familiar songs in new ways. I’m always excited to have the chance to share my sounds with a new audience.”

“The experience was phenomenal. From the parties to the attention and treatment provided by the promoters and staff behind the Peach Party, to the attendees. It was truly an honor to have been a part of the event. I’m beyond excited to be back and to see how much bigger it has gotten over the years.”

What makes Peach Party so special for you?

“I get to see so many familiar faces as well as meet so many new souls that share the same likes as I do. They’re there to enjoy a fun weekend filled with amazing music and great friends. I also get to share my music and make people dance which is what makes me the happiest.”

What do you think you can bring to Peach Party when it comes to music that will give people a new experience?

“Every weekend, every event I always do something different to my set bringing a new experience. I’m excited to play Peach Party because the work that Keith Allen Young and all the Atlanta boys are doing it’s awesome. They deserve the best and all the DJs are trying to bring the best!”

What makes Peach Party the must-attend event for DJs around the country and
the world?

“The patrons in Atlanta “know their music” and are very open-minded to the DJ’s expressing themselves. I never feel as ‘FREE’ as I do when I play in ATL. As a DJ, you never have to conform, and you can always be you. This is golden for a DJ, and you always have to come with your best because folks in ATL know their music! I give Atlanta and Peach Party the #1 prize for unity, friendship, great music and for investing in all the right places. I’m their #1 fan!”

Peach Party has become a tradition for many across the country and you’re now part of the superstar DJ lineup for the event! How are you feeling?

“This will be my first Peach Party! I have been looking forward to this event for months now! It means a lot to be part of something that has become a very special weekend for many around the country. I love seeing people really dance and Atlanta has those crowds which I love. People come out and have a great time and it shows!”

As a DJ, what’s your favorite part about Peach Party weekend?

“My favorite part is the music. Peach Party is growing in size each year and has a reputation for great music and DJ’s. I also appreciate the people who come out to support the event. Their intentions are always in supporting our local venues and coming out to have fun and enjoy good music.”

You’re the only local DJ in the lineup for Peach Party. What does it mean to you?

“Atlanta has one of the livest crowds when it comes to circuit parties. I always feel welcomed here in Atlanta. I was born and raised here, so it feels good to have the support of the home team on your side.”

Do the crowds at Peach Party make you feel welcomed and do you think they embrace your music and other unique styles?

“I think it has been said to me that Atlanta is a mix of “southern hospitality with a circuit mentality”. That is so true. But, don’t be mistaken, Atlanta loves to party and have a good time and they also know their music. It takes a certain something to make “the cut.” With that being said, I feel fortunate enough to have made “the cut” over the years. But, I take that seriously and try and push myself to give my best and then some every time. I am very fortunate that they trust me, allow me to be me, and take the ride with me. As a result, I have had some of my best sets in Atlanta. That’s priceless.”