People of the Year 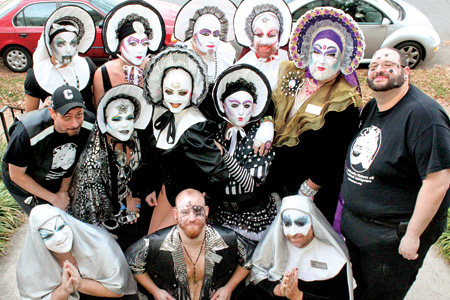 The white face, the flamboyant nun apparel, the seemingly ceaseless fundraising for various charities, especially for LGBT homeless youth — all of this, plus the outrageous fun they bring to our city, leads us to celebrate the Atlanta Sisters of Perpetual Indulgence as our People of the Year.

Founded in 2009 by Sister Gunza Blazin (many Sisters asked their real names not be used in this story) with just a few marching in the Atlanta Pride parade that year, the chapter has grown to more than a dozen dedicated men in holy drag who seek nothing more than to “promulgate universal joy and expiate stigmatic guilt.”

For the Sisters, that means to make people feel good while also doing good, whether its handing out condoms at bars or hosting fundraisers for its adopted cause, Lost-N-Found Youth.

Lost-N-Found Youth, which serves those 18-25, was founded by the Atlanta Sisters at the end of 2011 when current Abbess Rapture Divine Cox (who many also know as Rick Westbrook) began working with Art Izzard, formerly of StandUp for Kids, to conduct outreach to LGBT youth living on the streets.

When they looked for help from local LGBT youth organizations, they said they faced too much red tape and nothing that would help the young people get off the streets immediately.

So Westbrook and Izzard (not a Sister) and the entire Sisters chapter decided to create their own organization. In the last year Lost-N-Found Youth has rented a six-bedroom house where its six beds have been filled since Day 1 and staffs a 24-hour hotline.

The group also brings awareness to the plight of homeless youth by holding vigils, camping out on a U-Haul truck for 48 hours (as Westbrook did in November) and Sister Ursala Polari overseeing Lost-N-Found’s monthly Big Gay Game Show at Jungle to raise funds to keep the doors of its shelter open.

In the past two years, the Sisters have raised approximately $50,000 for various organizations. They also hold a monthly fundraiser at Woof’s the first Thursday of month and a new speed dating event at Blake’s.

“There’s a part of us that we are supposed to be humble and I know I’ve been on the sidelines for awhile, but the Sisters have worked very hard, tirelessly, to give back to the community,” said Sister Gunza Blazin. “We are constantly bending and twisting around our own schedules so we can do good for others.”

‘To make a difference’

Sister Dixie Normous, who will be the new abbess when Rapture’s tenure ends this year, said being a Sister means being part of something greater than yourself.

“We’re in our third official year and I think in the past two or three years we have done a lot and grown a lot. In this year alone, spearheaded by Rapture, we founded the Lost-N-Found organization and put a lot of energy into that. I like being part of an organization that helps our community,” he said.

While being named People of the Year is a tremendous honor, Rapture, aka Westbrook, said the Sisters do not do what they do for the publicity.

“We don’t do this for recognition,” he said. “We do it to try to make a difference in the community. I’ve always been proud of my sisters because they stepped up with Lost-N-Found. The Sisters will continue to support like they always do but the community has knocked it out of the park in helping us.”

Rapture wishes all of Atlanta would realize the importance of helping LGBT youth.

“I’m an old queen,” he said. “Things have changed. I would never have thought of coming out when I was 13 or 14 but kids today are.

“Things are changing. The [Atlanta City] Council passed a resolution in support of gay marriage and the mayor signed it. Every time we move forward, it affects our youth. One in four youth become homeless the moment they tell their parents they are gay. We as a community have to realize as a whole they are our future,” he added.

The Sisters say they do what they do for people like Anthony Chandler, who until about two weeks ago was sleeping in city parks. Chandler got Lost-N-Found’s number from someone else living on the streets and called it late one night.

Westbrook answered and went to meet Chandler immediately, brought him to the home where he was processed by an onsite social worker who also lives in the home.

Chandler said he has been living on his own since he was 17 and moved to Atlanta earlier this year from Arkansas seeking a better life.

“I was living with my grandfather who was a preacher after my mother lost custody of me and my brother because of drug addiction. I confided in my aunt [that he was gay] and she told my grandfather, who is very religious, Pentecostal, and he gave me an ultimatum — he said he didn’t want that under his roof,” he said.

Chandler has spent most of the past eight years on the streets and admitted drug addiction and prostitution became a way of life and survival.

“It’s just been difficult coming out of that place,” he said.

In 2010 he tested positive for HIV when he randomly went in for a test with a friend. Through Lost-N-Found, he is now a client of Positive Impact’s MISTER project and receiving treatment after having been off his medications for some time, he said.

“For the first time in several years, they made me feel like I deserve a better life,” Chandler said. “In just a short amount of time so many doors and opportunities have opened up for me. They have made me feel like family. They really answered my cry for help.”