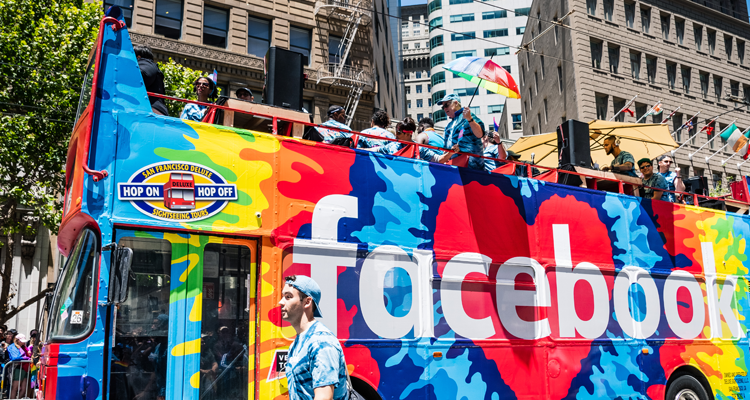 Come June 1, corporations trade their everyday logos for rainbow versions and tweet out vague messages of love, equality, and Pride. This 30 day long stint of allyship typically dissolves July 1, only to be reinstated the following June. This phenomenon — labeled with phrases like “pinkwashing,” “corporate Pride,” and “rainbow capitalism” — is relatively new; within the last five years, it has become the norm for brands to recognize Pride month.

At its best, this mass corporate allyship is a sign of a culture of LGBTQ acceptance. After all, polling from Public Religion Research Institute (PRRI) shows that 76 percent of Americans — more than ever before — favor laws protecting LGBTQ Americans from discrimination.

At its worst, however, it’s an exploitative cash grab at a historically marginalized community whose purchasing power has begun to increase. Although public opinion favors the LGBTQ community, things are still bleak when it comes to LGBTQ rights. According to the Human Rights Campaign, 2021 is slated to become the worst year for anti-LGBTQ legislation at the state level, with more than 250 anti-LGBTQ bills introduced nationwide in only a six-month span. Despite their outward support of the LGBTQ community during Pride month, many corporations are distributing money to the politicians pushing these bills and blocking pro-LGBTQ bills like the Equality Act.

This month, the progressive and pro-LGBTQ Representative Pramila Jayapal took to Twitter to call out corporations doing just that. Businesses like Wells Fargo, Walmart, and Goldman Sachs all took part in the slew of rainbow logos and social media celebration, despite donating $69,000, more than $150,000, and $102,500 — respectively — to Sen. Mitch McConnell and other Republican senators blocking the Equality Act, according to Jayapal. Data compiled by Corporate Accountability Action, an organization dedicated to highlighting corporate donations to anti-LGBTQ legislators, reveals that AT&T (another company “supporting” LGBTQ Pride on social media) donated a whopping $204,350 to 133 anti-LGBTQ legislators.

As these numbers reveal, the trend of rainbow capitalism serves as an attempt by many brands to cover up their year-round anti-LGBTQ behavior with a rainbow flag to continue profiting off their pro-LGBTQ customers. Many companies are attempting to transform the history and struggle associated with Pride month into a new Black Friday while actively contributing to the struggle.

So, how does one as a buyer distinguish the true allies from the fake “woke”?

“It’s not just about a change of logo, it’s not just about the rainbow,” Oksana Tunikova, the Senior Brand Manager at Crello, told Georgia Voice. “If you [recognize Pride month as a brand], you need to have a statement behind it. We understand that some brands do this, but unfortunately what we notice is that most brands just blindly follow the trend to catch the hype. They [usually] have this general statement about raising awareness for Pride month, but Pride month isn’t something that needs awareness [anymore]. What needs awareness is the problems and issues the community still faces.”

Crello is an online graphic design platform that allows brands to visualize their marketing ideas. The company has a vast library of templates that can be used by brands, including many relating to the LGBTQ community and Pride — which Tunikova says are offered year-round, but used far more often by clients during June.

According to Crello, brands can use their platforms and power to actually support the LGBTQ community — but it requires much more than a rainbow.

Have Something to Say

Crello suggests participating in Pride month as a brand only if you have something authentic to say. This could be, for example, explicit support for the Equality Act (and having the political donation record to back it up), opposition to specific anti-trans bills being passed in state legislatures, or tips for creating an inclusive workplace environment. This shows that the brand is familiar with and truly cares about the current issues LGBTQ people are facing.

Be Mindful of the Rainbow

If a brand wants to use Pride hashtags, rainbow stickers, and LGBTQ filters on their social media content, they should be coupled with charity or education — otherwise, they’re just exploiting the month for visibility. Look for brands that make donations during Pride month to LGBTQ organizations like The Trevor Project or, locally, Lost-n-Found Youth and educates their followers on specific LGBTQ-related issues with infographics.

Let’s not forget that the LGBTQ community is made up of actual people! According to a recent survey of LGBTQ professionals by LinkedIn, 25 percent of respondents reported being intentionally denied career advancement because of their identity. Companies that are true allies should have diversity among their higher-up positions, clear anti-discrimination and anti-harassment policies, and educational opportunities and bias training for employees.

Maybe one of the easiest ways to tell if a brand is truly dedicated to LGBTQ equality is year-round support. The LGBTQ community doesn’t only exist during June, so advocating for them shouldn’t, either.

“A company that claims to be inclusive and diverse should be like that in all ways,” Tunikova said, “not just with their public facing social media and marketing presence, all year round.”