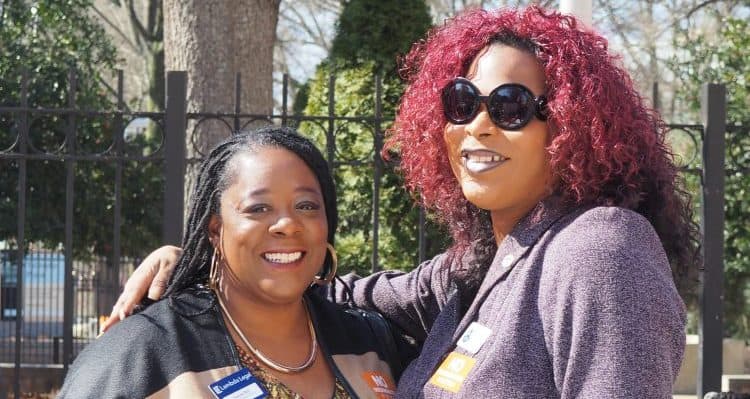 Native Atlantan Chanel Haley jokes that she works so much there’s not much free time to have hobbies — but she does find time to sit down for her favorite TV show, “Big Brother.” Haley is Georgia Equality’s transgender inclusion organizer, and her work takes her across the state advocating on behalf of Georgia’s trans and gender nonconforming folks. Georgia Voice sat down with Haley to learn a little more about her role in the movement to secure equal rights for folks in the LGBT community.

Chanel, what are some of your roles within Georgia Equality?

It’s mainly visibility. I also do a lot of competency training with various organizations and agencies. I also do sexual harm reduction training for the trans community, and trans resilience. I think that in this Trump administration, this very highly conservative administration that we are living in as a country … a lot of times we feel we have nobody speaking on behalf of us in that setting, and we do. My job description is to work with schools, universities [and] politicians to create sexual orientation and gender identity protections within policy.

You mentioned you have an upcoming event this weekend?

I’ll be hosting a town hall in Columbus, Georgia, a legislative update. For the first time there are two bills that actually include gender identity and the protections sitting in the state House right now. I’ll be talking about the resources we have now and the importance of people speaking out against discrimination.

In every other marginalized community, this is how it’s been: People don’t speak out about it. When you address it to these legislators, people say, “It’s not existing; we haven’t had reports about that.” We need to quantify that.

Why is addressing discrimination a topic of such importance to you?

Because first of all, it’s ridiculous that people discriminate based upon their personal beliefs. If we all live in a society, we all have the same rights, period. I’m a person who probably wouldn’t ever get married, but it’s not my place to tell someone whether they should get married or not.

Discrimination is something I’ve experienced myself and I can’t imagine this is still going on in 2017, going into 2018, and we’re still fighting and talking about the same discrimination tactics; the same marginalized people. It baffles me and it bothers me and I think when you see a problem and you don’t try to help, then you are part of the problem.

Simone is great. The best boss I’ve ever had, but she’s also my friend. It was interesting. I enjoyed more working for her at the Capitol than on the campaign, but I learned a lot about politics and how people respond and how they act. I learned about working with people that you wouldn’t necessarily think you would work with.

There was never a closed door to me. I was part of everything and everyone doesn’t have that kind of experience. I got to see and learn everything and it was a really great experience of seeing how the campaign starts and how it finishes; the drama that comes in between.

What are some of the biggest victories you’ve had while working with Georgia Equality?

I think Georgia Equality as a whole stopping the religious exemption legislation that’s come through, when the governor vetoed that, that was another victory.

The first victory that I got was when Kennesaw State, when they merged with Southern Polytech, Southern Polytech’s nondiscrimination policy was way more broad and inclusive than Kennesaw’s. It was simply me bringing it to Kennesaw University’s attention where they got to add that in there. They do include gender identity in there now. That was the first kind of victory.

Last weekend I was in front of the University System of Georgia’s Office of Equity and Compliance. Georgia was one of the states that sued against the Obama administration’s guidance for Title IX. It was 12 schools that showed up to learn more about the trans and gender nonconforming community and how they can be more inclusive in their schools. This is in a Trump administration that these leaders who are responsible for equity and compliance, are still interested in protecting their trans and gender nonconforming students.