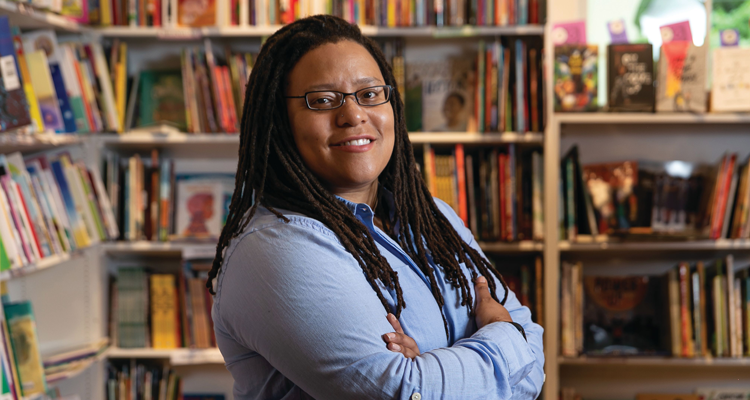 Every year, Georgia Voice honors one brave LGBTQ Atlantan who’s changing the landscape for LGBTQ people and making a difference. This year, the honor goes to State Senator Kim Jackson.

Jackson is a history maker. In the November election, she became the first out LGBTQ person ever to be elected to the Georgia Senate. Nationwide, she’s the third black lesbian to serve in a state Senate. A graduate of Emory’s Candler School of Theology, she is an Episcopal priest known for her activism on behalf of criminal justice reform — particularly for the abolition of the death penalty — and in support of unhoused Atlantans, among many other causes. We sat down with Jackson to discuss her plans for using the next two years of her term to enact racial and social justice.

Quotes have been edited for length and clarity.

Could [we] start by talking about some of your objectives for the next two years?

I came with a deep commitment to criminal justice reform — I’ve been doing that work for the last ten years, and I will continue to do that in the Senate. I am deeply committed to making sure we lower our prison population, especially since we are one of those states with the highest number of people under state supervision in the nation. I also come with a grave concern for public education and wanting to make sure our public schools are fully funded. I don’t just mean funding the formula, the GDE, that’s older than I am, but actually fully funding public education with a new formula that’s updated based on where we are now.

Why [do you believe it is] so important that the state [abolish] the death penalty?

There are a few reasons.

This is not the best argument in terms of morality, but it is important in a state like Georgia where we need more money. Executing people is expensive. It’s extraordinarily expensive. So, when we want to do things that promote a better life in Georgia, like increasing our funding of public schools, or increasing access to medical and mental health services, there is money that we’re using to still life instead of money that we’re using to advance life. That’s one argument, but not the moral argument.

I think [an]other reason is that we know — without a shadow of a doubt the data reflects this — the death penalty is imposed in ways that reflect racial disparities and economic disparities. If you are white and wealthy, you are not going to get executed. But if you are poor and Black, the likelihood of you [being sentenced to death is much higher].

Finally, for me … I believe people can get better … To quote Brian Stephenson, we are not the worst thing we have ever done. And so, I believe that we need to give people an opportunity to be better. In Georgia … by the time we strap somebody down to execute them, they are not the same person that they were when they may or may not have committed a crime.

You have talked about being a faith leader in opposition to the so-called “Religious Freedom Restoration Acts …” [What is] your theological argument against [them]?

Fundamentally, I am rooted in a theology that calls us to respect the dignity of every person. And this theological notion that all of us live with a divine spark within us. So, what that means on the ground is that we treat people fairly. That we recognize, whether you believe the same thing that I do, there is good in you, and therefore I am going to treat you with dignity and decency. I think that is the same principle grounding in multiple religious faiths and not just the Christian faith. And so what RFRA seeks to do is say that you can be a person of faith and because you are a person of faith you are not going to serve someone else… What that ultimately does is it protects religious bigotry … and I think it is in fact antithetical to what it means to be a person of faith.

I think some of the desire to pass [RFRAs] is misinformed … We [faith leaders] already have protections [to marry only who we want to marry]. The federal Freedom of Religion Act already establishes [that protection]. So, I think we’re trying to fix a problem that doesn’t actually exist.

Before we run out of time, [if you could pass any legislation], what, ideally, would you want to do?

I would very much want to see us move toward being a state in which we only imprison the people who are actually dangerous to us. Another piece of legislation I would love to see would be [to] expand Medicaid, and especially for women ….

This also includes money being no object, right? So, my wife is a former public-school teacher. We should give our public-school teachers raises! Full stop! If COVID-19 has taught us anything else about [anything] it is that it is very hard to educate children! We need to pay [teachers] more.