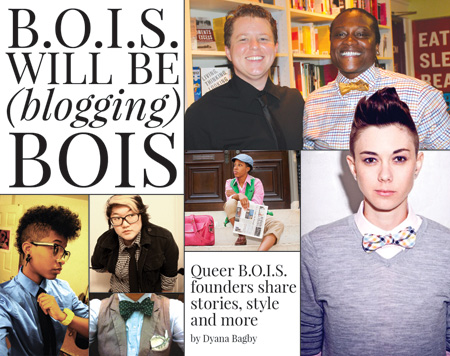 One year ago, Latania McKenzie sat down at her computer and with a few clicks started putting into action a dream she’d had for years — a blog that caters to masculine-identified women as well as to transgender men.

Named Queer B.O.I.S., the blog espouses the values McKenzie, 30, and her partner and blog co-founder, Taliba, aspire to in their professional and personal lives. While B.O.I.S. is meant to quickly identify its target audience, the letters also have meaning: Business, Opulence, Investment and Style.

McKenzie, 30, moved to Atlanta 12 years ago from Belgium. She likes to shop in the men’s department and has a deep affection for pocket squares and bow ties. She said the blog is meant to bring visibility to a community that is often overlooked in the media. And while her first name is Latania, she prefers to just be called McKenzie.

“When I walk down streets I see a lot of people look who look like me that are masculine presented. We shop in the men’s department or mix our clothing with women’s clothes. But there is not really a focus on us in media,” she says.

“We make money, too. And the media should advertise to us and notice us. What I want people to know is we are not average. Don’t dismiss us,” she says.

And that’s why B.O.I.S. and what the letters stand for is more than an identity, McKenzie says. It’s a way of life.

“We are interested in promoting businesses that cater to us but are also comfortable receiving us,” she says. “Opulence — we all know what that’s about. People don’t believe we will take part in the upscale. That’s not true. And when we talk about investment, we mean in oneself, in money or our community. An investment in anything that is good for us and the community.”

That has led to a partnership with Charis Books & More, the Southeast’s oldest feminist bookstore, as well as Charis employee Elizabeth Anderson becoming a contributor to the blog.

And then there is style. The blog even posts a Look of the Day.

“If you look good, you feel good,” McKenzie says, adding one can never have too many accessories.

Proud of our first ‘baby’

“And if I feel really silly, a high femme with butch tendencies, but that’s my women’s studies background talking,” she says.

“I try to live in space where people can self identify. I am not prone to dismiss that. Being a woman of color from the South I know what it is to claim identity,” she says. “If those words make you feel powerful, use them.”

Taliba says she is incredibly proud of the blog that now has some 6,000 followers and is growing every day.

“This is our first baby. I’m a proud parent. It’s brilliant,” she says. “She [McKenzie] does a wonderful job. It’s creative. Visually pleasing. I love it. I still think there’s a need and that’s why we’re doing so well.”

What makes it striking are the personal stories submitted daily by people who identify as bois — they share photos of their hip and stylish outfits, trans men share stories of their transitions, others share stories of a business. They all talk politics, current events and about making the world a better place.

McKenzie describes herself as focused, driven and thoughtful. The same can be said about the Queer B.O.I.S. family.

“We get a lot of feedback. And we get a lot of submissions from actual people who send in pictures of themselves. People who are saying I appreciate your blog and for the information it is providing. More feminine lesbians come and say they told their girlfriend to follow us so they can dress better,” McKenzie says.

People form perceptions all the time and McKenzie wants her blog to help change perceptions.

“We recently took a vacation to see family in Belgium and we drove from Belgium to Spain. Everywhere we went, all the gay spots, people there said butch lesbians like to fight. Where do they hear that? We as masculine-identified women can change that,” McKenzie says.

And while McKenzie is very supportive of the transgender community, she wants to make it clear just because she is masculine does not mean she desires to be a man.

“I’m not trans and am not looking to be trans, but I do support the trans community. There is not enough representation and that’s what I hope my blog can help with,” she says.

More than a creative outlet

McKenzie, who works for Cox Communications and manages 14 people, says she really started the blog one year ago because there is not enough creativity at her job.

But after she started tracking the blog with Google analytics, she realized it was becoming something bigger than just a creative outlet. People were paying attention and wanting more.

“At first I didn’t think it was a big deal. Then I realized thousands of people were coming to the site each month. And each month the numbers go up,” she says. “Which inspires me to want to do better than before.”