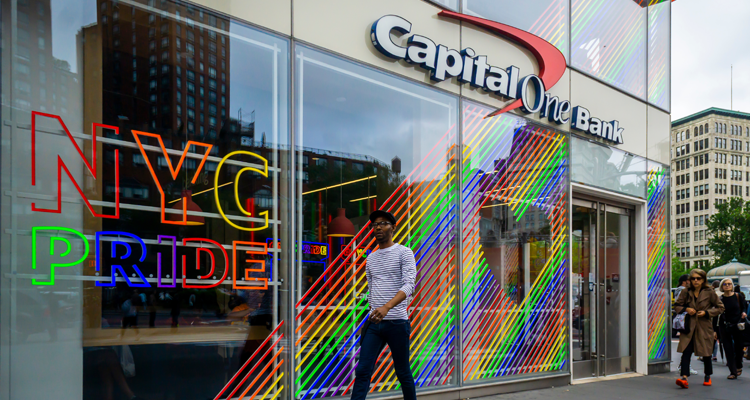 When Charis Books and More opened in 1974, it wasn’t identified as a queer-owned business, and wouldn’t be until one of its two founders came out years later. It was, however, intentionally a feminist bookstore, which has over the years developed into a safe space for the queer and trans community, women, and so many more.

When Charis started to identify itself as a queer bookstore, it entered a distinct category of businesses. Since then, businesses big and small across the country have begun selling items that used to be found only in queer-owned shops. Notably, massive corporations such as Target and Walmart have also started selling items tailored to LGBTQIA+ customers, especially during Pride Month in June. It has become so common for big corporations to sell Pride merchandise that there is now a term for it.

“Rainbow capitalism” is the phrase used to describe the capitalistic exploitation of Pride by large corporations. The term came to describe the sudden influx of corporate Pride merchandise that occurred after marriage equality was established with Obergefell v. Hodges in 2015, and initially seemed like a great step forward to many people. But how much of it is performative? Does the mass production of Pride-themed products take business from queer-owned businesses that may have similar, maybe more expensive stock? Like many other issues, the answer lies in shades of gray.

One prominent critique of rainbow capitalism is that it shifts the focus of Pride away from queer liberation and emphasizes consumerism instead. These massive corporations can also draw business away from smaller, queer-owned businesses, as they are often able to carry more stock at cheaper prices. Look noted that there are only a “handful” of bookstores similar to Charis left, compared to when it was founded.

Additionally, many critics of rainbow capitalism find the perceived allyship of big companies to be performative. Rainbow flags are added to a store logo during June, but all traces of Pride are wiped clean on July 1.

“I think [the allyship] is performative, and I think it’s all capitalism,” Look said. “Having said that, I know that for many people, particularly in rural communities … their only real queer community is online. For those folks to be able to walk into a Target and see Pride merchandise is amazing.”

Look pointed out that there are both positive and negative effects of this mass production of Pride products.

Ultimately, a lot of power comes back to the consumer. If you live in an area with a queer-owned business that sells the books, flags, or any other Pride materials you are looking for, you have the option of supporting a local business or a corporation. Yet for those who have no such access to these safe spaces, seeing representation in a store they are able to visit could give them the validation they may not receive from their own community.

On this topic, Look had some advice: “We’re an independent bookstore, so we’re gonna tell people to never shop at Amazon.com.”

She also added that she personally knows of feminist bookstores that have gone out of business in part due to Amazon.

So, is rainbow capitalism good or bad? Really, that’s for the consumer to decide. It may benefit their queer community and validate their identity, or it may threaten the businesses that offer them safe and welcoming spaces. LGBTQ+ people need to decide what best benefits their area and put their money toward what will offer a safer and more welcoming environment for them and their community.