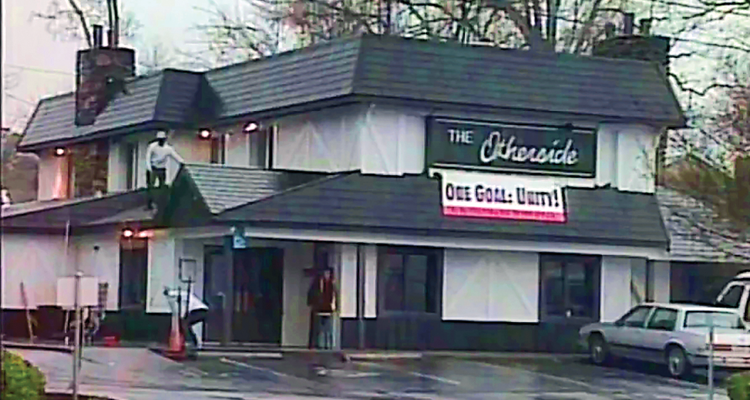 Until 1997, Otherside Lounge was a popular lesbian bar and nightclub that sat on Piedmont Road. The bar, which was referred to as a “ladies club” by some newspapers in the wake of the attack, was a popular spot for members of the LGBTQ community to congregate, especially on Friday nights and weekends. Beginning in 1990, Otherside was a place in Atlanta that offered a safe, social environment for Atlanta’s lesbian community. But on February 21, Otherside Lounge was changed forever. At approximately 9:45 p.m., a bomb on the patio exploded.

Though not perfect, some members of the LGBTQ community who lived in Atlanta found Otherside to be a place where they could express themselves, especially in comparison to other small towns across Georgia and the South.

“Atlanta was exciting, the Braves were winning, the Olympics were coming, and the city was just filled with this energy that was amazing,” Fran Collins, a survivor of the attack, told Georgia Voice. Collins had moved to Atlanta from a small town and loved the atmosphere of the city.

“Around that time is when I attended my first Gay Pride march, here in Atlanta,” she said.

But the excitement that coursed through the city would soon turn into anxiety. Leading up to the night of the attack, Atlanta had witnessed two other bombings in the city, leaving residents and police alike on high alert.

That Friday night, Collins went to Otherside Lounge with her girlfriend at the time, who wanted to celebrate a friend’s birthday.

It was a normal night at the bar. Collins’ girlfriend showed her around, even taking her out to the patio. Collins said it was so cold outside that she only stepped out onto the patio for a moment.

“If we had stayed out there, it would have been life-ending,” she said.

Collins got a drink and then headed over to the pool tables to play with her partner and other patrons. At approximately 9:45pm, the first bomb went off. Located outside, the vibrations and noise meshed with the loud house music in the lounge, but people quickly knew that something had happened.

Collins said that conversations stopped, and patrons in the bar didn’t know what had happened. Then, smoke and the smell of explosives drifted into the bar and Collins and her girlfriend crouched down, but didn’t leave the building.

“At that time, we didn’t know if it was gunshots […] it was just mass confusion,” Collins said.

Undercover cops who were working across the street came running into the bar and instructed everyone to leave the building and gather in the parking lot. Soon afterward, police, medics, and firefighters arrived.

Shortly thereafter, a second bomb went off. Luckily, no one was standing in the vicinity, but it still inflicted significant damage to the surrounding area, including to Collins’ girlfriend’s car, which was completely totaled.

While the event caused no deaths, five patrons were wounded and the establishment was never able to recover. In 1999, Otherside Lounge shut its doors for good.

“People say that five people were injured that night, but no. Everyone that was there was injured in some way,” Collins said.

The attack was motivated by the perpetrator’s hateful feelings toward the LGBTQ community. The attacker, who was apprehended, is intentionally not named in this article at the request of Collins.

The bombing was a quarter of a century ago, yet it seems eerily similar to incidents that have happened in just the past decade. The Pulse Nightclub shooting, which led to more than 50 deaths, was also motivated by anti-gay sentiments and echoes the incident at Otherside.

In recent years, Collins has found that younger people in Atlanta’s LGBTQ community have no knowledge of the Otherside Lounge attack.

“I want people to know that this can happen at any place, any time,” she said.

And it seems that this is a pressing time to remember events like Otherside. Anti-gay and trans hate crimes are still prevalent in the United States; 2020 saw an increase of nearly 3,000 recorded incidents in comparison to the year before. Out of the nearly 8,500 anti-gay hate crimes recorded in 2018, only 27 perpetrators were prosecuted, and 20 were sentenced.

“History can repeat itself, and no matter how far we move forward …] there’s always danger,” Collins warned.

The Otherside Lounge bombing serves as a reminder that, in Atlanta, the gay community has created a city where Pride is celebrated, where business owners can be out of the closet, and where people can hold their partners’ hands in public. But it also shows us how much progress we have yet to make in order to create a citywide community that is safe for all.

Collins concluded with a quote from Armistead Maupin that she said came to mind while reflecting on the attack: “the world changes in direct proportion to the number of people willing to be honest about their lives.”