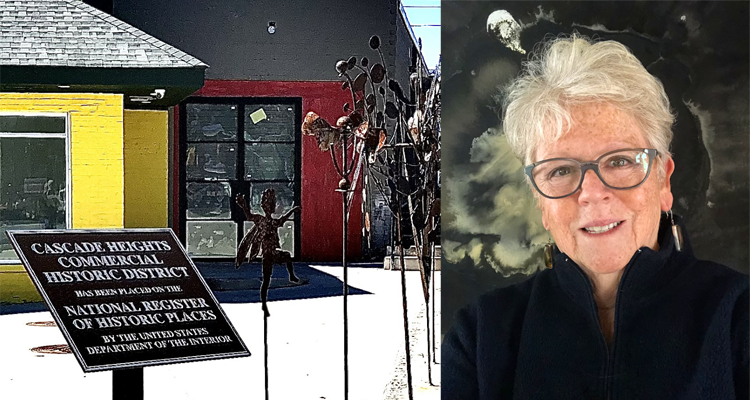 Shea R. Embry is known as someone who lifts up communities. With more than three decades in the real estate industry and two decades in development, she’s taking her talents to her own neighborhood.

Cascade Heights, just south of the Westside, is Atlanta’s hidden gem. The neighborhood is rich with natural beauty, with the second largest tree canopy in the city of Atlanta, second only to Piedmont Park; 600 acres of green space; and Cascade Springs Nature Preserve, which boasts miles of hiking trails and the only waterfall within Atlanta’s city limits. It’s also rich with history and diversity. Cascade Heights is a predominantly Black neighborhood — 95 percent of the 76,000 residents are Black — and has been since the ’60s. It’s also home to one of Atlanta’s oldest Black-owned businesses, Barlow’s Barber Shop, a family-run business that’s been operating for about 60 years. It’s also been the home for many of Atlanta’s mayors, John Lewis, Hank Aaron, and Dr. Barbara King.

However, the neighborhood severely lacked commercial development — that is, until Embry. A resident herself, she wanted to grow Cascade Heights into a destination.

“I got frustrated because the day I bought my house I realized that, to do anything, I had to get in my car,” Embry told Georgia Voice. “I knew instantly I was either going to sell my house or buy property and bring in tenants. I went down and bought property in the core of Cascade Heights commercial district.”

Immediately, Embry worked with the state and national park service to establish the Cascade Heights Commercial Historic District. Current tenants of the commercial district include a juice bar, recording studio, beauty salon, coffee and wine house, and a fitness and wellness center. This year, the area will also be welcoming three new restaurants, each co-owned and operated by Embry.

To honor the area’s racial demographics, all of the business owners and operators in Embry’s buildings are Black and the new restaurants’ owners are too.

“I was looking for successful, experienced Black women who would like to own and run their own restaurant,” she said. “I knew in my heart that the right people to run it, that wanted to be partners, would show up and it would be a perfect situation. I trusted it.”

She found a partner in Deborah Van Trece, an LGBTQ Atlanta favorite and the internationally recognized head chef and owner of Twisted Soul. Van Trece will co-own and design the menus for two of the new restaurants: Oreatha’s at The Point, which will boast a globally inspired menu of dishes your mom would cook, and Serenidad, which will offer up delicious Latin soul food. Embry expects Oreatha’s to open this month and Serenidad to open in May.

Van Trece’s daughter, Kursten Berry, will also partner with Embry on Dulcet, a speakeasy which is expected to open in August. Berry is the beverage director at Twisted Soul.

With these new developments, Embry is aware of the dangers of gentrification, or the process of injecting wealth into a poor area and effectively displacing current residents. However, she’s making a concerted effort to support the existing community. She believes that, because of the level of income and wealth already present, Cascade Heights will maintain its identity.

“One of my purposes with the commercial district is to ring in businesses that support the existing community,” she said. “We can’t ignore the fact that gentrification happens. As many communities as I have lived in and done work in and helped, I truly believe that this is the first where I think it will maintain a balance. Part of the reason why is because of the level of wealth the Black community holds here. They’ve been here since the ‘60s … I want to uplift this community in the way it deserves.”