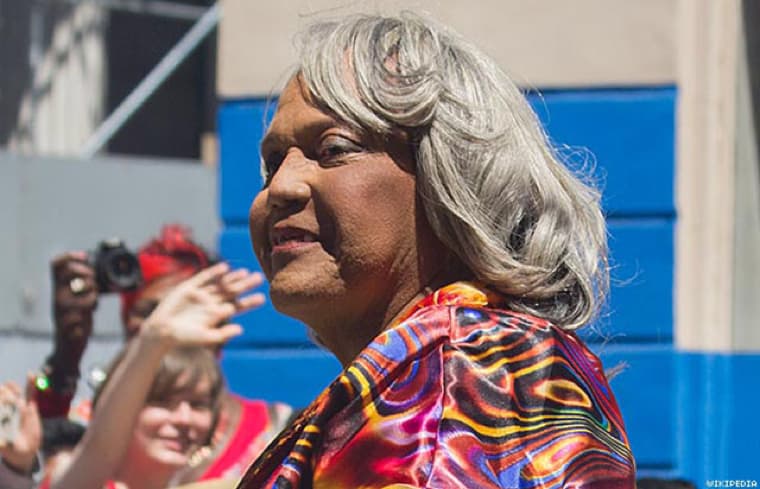 Miss Major Griffin-Gracy is not here for your revisionist history. Nor will she quietly retreat as a chapter in her life story is rewritten and consumed by the masses.

Griffin-Gracy was in New York’s Greenwich Village in the early morning hours on June 28, 1969, when a group of drag queens, trans women, lesbians and gay men rebelled against repeated raids of the Stonewall Inn by the New York Police Department. At the center of what would become known as the birth of the modern gay liberation movement were trans and gender-nonconforming people of color. People like Griffin-Gracy, Marsha P. Johnson and Sylvia Rivera, all beloved in the New York City trans community and all largely absent from the trailer of the recent Hollywood dramatization by director Roland Emmerich.

The legendary gay activist Larry Kramer may not have said her name, but Miss Major Griffin-Gracy fits the profile of the “crazies” he blasted online during a rant that accused activists of trying to derail the new “Stonewall” film. Griffin-Gracy is fine with being labeled crazy, but what she will not allow to happen is the erasure of her identity as a black, elder, transgender woman, along with her contributions and those of her trans sisters to the real Stonewall.

Many in the LGBT community have called for a boycott of “Stonewall” due to perceived “whitewashing” after the release of the official trailer. A new trailer portraying Marsha P. Johnson more prominently has recently surfaced online. Many believe, although it cannot be confirmed, that Johnson’s resistance as a trans woman of color sparked the multiday Stonewall riots. In the film, Johnson’s image and story as a heroine have been replaced by a fictitious white male character from the Midwest.

“Of course the white man has to step in and rescue, that’s been their privilege since they were missionaries in foreign countries,” says Griffin-Gracy.

“Don’t change history if that’s not what happened. Admit it. You’re a better person for admitting what it was than you are for creating this fabricated lie that you constantly have to defend.”

Now 74 years old and living in San Francisco, Griffin-Gracy is miles and years away from the pivotal night that changed the course of gay rights in America. Yet, she still recalls the blow she received to her head during the thick of the rioting.

“All I know is the police were there, we were fighting, and I’d been in fights before,” she says. “When you get in that type of situation with the police, the best thing to do so they don’t hurt or kill you is to piss them off enough to knock you out. So I got knocked out early and lived to see another day, cause once they get you down they continue to beat you if they think you’re gonna get up and fight back.”

Playing by the rules

Born in Chicago, Illinois, in 1940, Griffin-Gracy says she was sent to live with an aunt in the Bronx so she could be “straightened out” after her parents’ attempt at medical intervention failed to “cure” her effeminate nature.

“As early as 1957, I knew I was different. They sent me to see a doctor. They thought they could get me some medication and that would change me,” she says.

A rebel at heart, Griffin-Gracy understood there was a time and place for righteous rebellion, and in 1960s New York City, as a trans woman of color whose mere presentation as the opposite sex was considered unlawful, she played by the rules when interacting with police at Stonewall.

“If we were in female attire we would have to have three articles of men’s clothing on underneath or we could go to jail for impersonation and fraud,” she says. “When they arrested us they didn’t send us to jail, they sent us to Bellevue (mental) Hospital because they thought we were crazy.”

The challenges faced by Griffin-Gracy and other trans women during this era were not confined to the police. According to her, gay men also gave trans women a difficult time.

“Going to the Village was hard, especially as a black woman. There may have been one or two black gay guys down there who also gave you a hard time. You know, they don’t feel like we should exist unless we are on our knees.”

Griffin-Gracy has been fighting for her place in the world as an unapologetic black trans woman and Stonewall veteran for decades. In her view, this makes the dismissive criticism by Kramer and Emmerich, who in recent interviews admitted to injecting his identity as a white gay man into the forefront of his film, even more incendiary.

“You’re not gonna kill me off with this bullshit or bury me in a mountain of lies and garbage that didn’t happen. It’s supposed to be about the truth,” she says. “But when have these people ever told the truth? They’ve always made it comfortable for them. Respect what I’ve gone through to get here.”

Griffin-Gracy doesn’t anticipate retracting any of her criticism of the new Stonewall film in the event that it turns out to be historically accurate and inclusive.

“How on earth can it be inclusive with super white boy jumping down and saving the day? And if Marsha and Sylvia are in it, they must be a shadow on a back wall. Oh please! I’m not that gullible.”