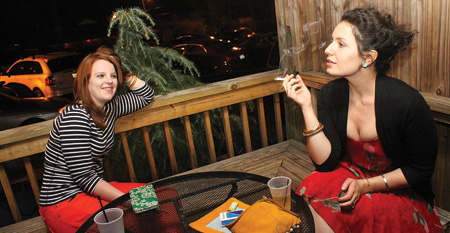 Jeff Powell, wearing his baseball cap flipped backwards, lights up a Marlboro Light in the upstairs bar of Blake’s on the Park. It’s early on a Saturday night, so the Midtown bar is not jam-packed with people. He and his friends are tossing back beers and cocktails as drag star Charlie Brown sashays past.

“I’m a very conscious smoker,” Powell said. “I’m aware of my surroundings. I want to be conscious of nonsmokers and don’t want to offend anyone.”

Blake’s allows smoking throughout the two-story bar, but in the past few months, several other gay bars have announced they are prohibiting smoking or only allowing smoking in a designated area. Powell said he has no problem with that.

“I would be in favor of designated areas. Here [at Blake’s] I smoke everywhere, but I wouldn’t mind being told I could only smoke in certain areas or go outside,” Powell said. But, he added, he would not go to a bar where smoking was banished completely.

Gay bars that recently have gone non-smoking at least part-time or have designated smoking areas include the Heretic, Jungle, My Sister’s Room and Mary’s. Burkhart’s announced it was smoke-free indoors on April 7 to positive reaction via Facebook posts. Leather bar the Atlanta Eagle is also considering limiting smoking indoors in May. Gay bars that have been smoke-free since they opened include Mixx and Cockpit.

At Mary’s in East Atlanta, management prohibited smoking on weekends starting this month. On the Saturday night of the first weekend, regular patron Dave Ritchie, 30, was ecstatic about the news.

“Before, I had an outfit that was just for Mary’s,” Ritchie explained. “I would come home and put it in the freezer to try to get the smoke and toxins out. But then our ice cubes started smelling like cigarettes. And we realized it was because of all of our Mary’s clothes.”

On this Saturday, Ritchie was wearing a new white leather jacket, thrilled to have clothing options to wear to his favorite bar. “Now that Mary’s has gone non-smoking, it’s wonderful.”

People can still smoke indoors during the week and Mary’s has a sizable deck and parking lot where many smokers already gather.

Sitting on the back deck, Olivia Rado, 23, who identifies as pansexual, was smoking Parliaments.

She said she didn’t mind the smoking in the bar until “everyone else started smoking.”

“It’s harsh. It’s gross,” she said. “Personally, I like it [banning indoor smoking]. I like my clothing — why should I have to wash it after a night out? And it’s a nice little interruption to go outside and meet people.”

The Health Initiative, which serves LGBT people, is working with the Breathe Easy Fulton County campaign to inform the public of the health risks of smoking and hopefully convince people to quit, while also encouraging public places and businesses to snuff out smoking.

According to a 2009-2010 survey by the Centers for Disease Control & Prevention, LGBT people smoke twice as much as their straight peers, said Linda Ellis, executive director of the Health Initiative.

Tobacco companies also specifically target LGBT people in their marketing and will even equate the right to smoke to the right for marriage equality in some national ads, she said.

“The message we’ve gotten historically is that the tobacco companies have done a good job of targeting the LGBT community and connecting bars with smoking,” Ellis said. “They are very intentional in targeting our community. It’s even been put in front of us as a rights issue and it’s very easy to buy into that.”

In a 2009 survey by the Health Initiative, Atlanta LGBT people did not acknowledge smoking as a health issue. Instead, Ellis said, LGBT people tend to think of HIV when they think of health issues facing the community.

The CDC is also now targeting LGBT smokers as part of its efforts. Dr. Tim McAfee, the director of the CDC’s Office on Smoke and Health, told the San Diego Gay & Lesbian News earlier this month that smoking among LGBT people is “a big, big health burden.” The new campaign, he said “will save lives and it will save LGBT lives.”

The first CDC ad rolled out this month features a woman who says she suffers asthma from working as a bartender in a gay bar and breathing in second-hand smoke.

Freedom of choice to smoke?

But the pro-smoking movement says not so fast. Don’t stop lighting up because someone tells you their health is at risk due to second-hand smoke or because it’s offensive, said Michael J. McFadden, Mid-Atlantic Regional Director of the Citizens Freedom Alliance Inc. and author of “Dissecting Antismokers’ Brains.”

He claims studies showing health improvements of people who are no longer around second-hand smoke are lies and funded by “antismoking radicals.”

“If the bars tend to be quite crowded and poorly ventilated, then I can easily see them being smoky enough to bother a sizable percentage of their patrons and I could even see concerns about health of the staff, not of the patrons,” he said.

A remedy is to install a better air ventilation and filtration system in the bar, he argued. When smoking is prohibited, owners tend to dramatically reduce their filtration systems — which, McFadden said, leads to more dangerous pathogens in the air.

McFadden also stressed he and other pro-smokers have nothing against bar owners doing what they want with their own businesses. But they do fear government intervention which would, they say, eliminate the freedom of choice to smoke.

Ellis, however, is tickled to see the local gay bars owners stepping up to ban smoking in most areas of their bars and believes it will contribute to a healthier community.

“Historically the bars, especially gay bars, are primary opponents and vocal opponents,” she said. “The expectation in Atlanta was we would have to take on and confront gay bars. I’m shocked and amazed that gay bars are leading the way. I’m proud of them,” she said.

Alan Collins, general manager of the Heretic, is a heavy smoker himself. When he announced on Facebook on March 1 that his bar would limit smoking to only the pub area, he held his breath waiting for the reactions.

“I sat there for two hours before I hit enter,” he said of the March 1 announcement. “But as soon as I posted, my Facebook page blew up. 99.9 percent of the response was positive. I got three negative emails. Most people said they were very excited and said they could now come back and not worry about getting burned on the dance floor.”

Collins said the Heretic has been thinking for some time about banning smoking throughout the bar. Last year, he thought the Atlanta City Council was going to outlaw smoking in bars and restaurants.

He believes such legislation will be passed eventually — he just doesn’t want the city to restrict how far smokers can be from a building’s entrance and was deeply opposed to what has been proposed.

“We have plenty of outdoor patio space for smoking, but that legislation would even block that,” he said. “We don’t want our customers having to go down the street and turn left and then smoke behind a tree.”

And while he says 99 percent of his customers are happy with his decision to limit smoking, there are a few who continue to give him grief. And, he acknowledged, it is the smokers who tend to spend more when they go out.

“Smokers usually spend more money in the club. I have no stats to back that up, but they are the ones throwing down some drinks,” Collins said. “I want to work with them. We appreciate all our customers and want to make everyone happy and I’m doing my damnedest.”

Jungle designated a small area alongside the wall where the bar is for smokers, keeping the dance floor free from cigarette smoke and lit butts.

“The biggest complaint I would get is people saying they are getting burned by cigarettes on the dance floor,” said club owner Richard Cherskov. Limiting smoking to a small designated area made sense when the club renovated last year and also added a small restaurant, he said.

On the first Saturday night of no smoking indoors, the music was thumping, people sat all along the bar and others stood around waiting for a punk drag show.

“We had been thinking about it for awhile and decided to wait until after winter so people wouldn’t have to go outside and freeze,” Overall said over loud music. “People had legitimate complaints.”

The response has been positive to Mary’s decision, he said. The thought of city or county intervention could be worrisome, however.

Atlanta City Councilmember Alex Wan, who successfully got legislation passed to ban smoking in city parks, said there are no plans before the council to bring up other ordinances to ban smoking in bars or clubs.

“At this point, there hasn’t been any conversation even to propose any action,” Wan said. “Clearly, if bars choose to ban smoking on their own, that’s a business decision they are making on their own. I think it’s great that some bars/clubs are opting to be smoke free. I remember that was one of the things I liked most about Red Chair.”

Overall remembered attempts by the city to ban indoor smoking and, while he said he has no opinion on the matter, there were many bar owners worried about losing business. Mary’s is waiting to see if business will be impacted.

Top photo: Oliva Rado (right), 23, smokes with a friend on the deck of Mary’s. She said she personally likes the decision of management to ban indoor smoking at the gay bar on weekends. (by Dyana Bagby)