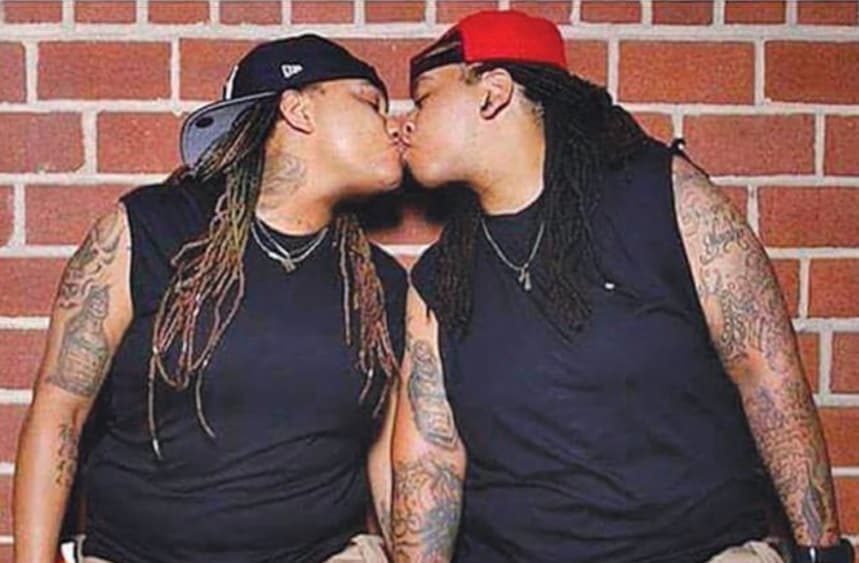 ‘Stud for stud’ and the evolution of black Atlanta lesbian dating

Being gay in Greensboro, North Carolina, is pretty simple: The LGBT community is small, so people like who they like, explained Robin, a 29-year-old black lesbian who was taken aback when she relocated to Atlanta a few years ago.

For starters, Atlanta women were into labels. Further, those labels limited socially acceptable couples to one type – a butch and a femme.
A “soft stud” who likes other typically masculine-appearing women, Robin found her niche in the city’s small but growing community of “stud for stud” women.

“I know a lot of stud on studs here in Atlanta,” said Robin, a customer service specialist who didn’t want to use her last name. “People are becoming more open-minded.”

Heteronormative gender roles are a signature of lesbian circles, influencing everything from body language to hairstyle.
In the love department, dapper studs date sultry femmes, according to decades-old cultural rules that have a particularly strong foothold among black LGBT women.

Yet a low rumble of change is growing louder.

More masculine-presenting black lesbians are embracing the idea of romance between butch women. Stud for stud – or S4S – women are showing up on TV shows, forming online groups and openly turning their backs on rules that say Ms. Right must carry a purse.

Insiders say such relationships are old news among whites. But in black circles, where strict ideas of what it means to be a lesbian prevail, the evolution is causing celebration and controversy.

‘Society has told us you need this balance of power’

To be sure, there have always been femme-femme or so-called “no label” pairings among black LGBT women. What’s slowly shifting, say community insiders, is the acceptance of couples where both women are definitively masculine.

Such pairings directly challenge antiquated ideas that have thrived in the LGBT community and beyond, said filmmaker Nneka Onuorah, whose 2015 documentary “The Same Difference” explored S4S themes. The hit film has sparked spirited discussions at showings in Atlanta and across the country.

“When people see two masculine women together, they can’t process that. Society has told us you need this balance of power – you need someone to take care of things and the other to nurture,” Onuorah said.

For black lesbians, masculinity has long meant carefully mimicking black males. During the 1950s heyday of butch/femme culture, black studs sported three-piece men’s suits and a perfectly coiffed femme on their arm – preferably in a gorgeous dress, according to the website Out History.

Generations later, many black lesbians continue to closely mirror cisgender men, even down to their homophobia, said Washington, D.C.-based writer Eden Carswell. She recently wrote about her own experience being approached by a fellow stud for the Black Lesbian Love Lab blog. The article drew several comments illustrating how touchy the topic remains.

“Get this fag shit outta here,” wrote one commenter, identified as “Gully.”

“Many straight men act aggressive towards gay men because they’re expected to, not because they actually feel resentment or disgust towards gay men. It’s part of the image,” Carswell said. “The same is true of studs and butches. Some are vehemently against S4S simply because it’s expected.”

Underground scene coming into the light

For some black gay women already facing a trifecta of potential sources of discrimination, flying in the face of established community norms can seem overwhelming, said Shaquea Moore of Decatur. Moore said most women find it easier “to go with what’s normal.”

“All studs are not anti-dating studs,” she said. “It’s just that it’s frowned upon. I think more of us would do it if there wasn’t a stigma.”

Many women want to seem more palatable to the greater black community, still largely coming to terms with LGBT men and women in general, said Kai Brown, a vocal advocate for S4S visibility from Washington, D.C.

“To get better acceptance and understanding and empathy from our community, our parents, our churches … we adopted the heteronormative,” she said.

Harsh comments and even violence motivated Brown to become increasingly vocal. Now going by “Stud Slayer,” she runs an irreverent S4S blog and recently spoke at a Washington, D.C. conference challenging ideas of what it means to be a stud.

“Just like you’re seeing transgender people all over the place, runways and stuff, you’re going to be seeing us,” she said. “We’re gonna be out there. We’re pretty out there now!”

There are signs that attitudes are thawing. The popular black lesbian web series “Studville” has explored S4S themes, while authors have added S4S-themed books to the standard romance themes. Online, a company called SOS Ultimate sells baubles that read “Sorry femmes, I like studs.”

In Atlanta, Robin said the S4S scene is still pretty underground. She mostly meets women through word of mouth – approaching in a nightclub is a little risky – or online.

Inch by inch, she believes, the community will come out into the light.

“I’m pretty sure it’s everywhere,” she said. “You just have to be open enough to see it.”