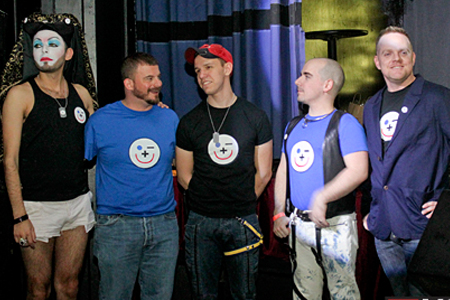 Team Friendly Atlanta wants to start a community-wide conversation about HIV stigma in a way that’s interesting — and fashionable.

The new organization that aims to dispel HIV bias is sponsoring a t-shirt design contest open to the public. Submissions for the contest begin are now through July 4. The board will select finalists and then open voting begins July 11 with the winner announded on Aug. 15.

“We wanted to bring up the topic of stigma and what causes it, why people are not disclosing their status, are not confiding in their friends, are not seeking services. This stigma has been going on as long as there has been HIV but we’ve not dealt with it like when it was first discovered,” said Randy Prophater, a founding member of Team Friendly Atlanta.

“We wanted to do something that wasn’t an event but to have an ongoing dialogue, albeit through graphic design.”

Team Friendly’s logo — a smiley face with positive and negative signs for eyes — is very distinct. Prophater said he hopes graphic designers can capture a more subtle emblem to express HIV and the stigma surrounding it that will still spark conversations when people see it.

“I think the Mr. Friendly logo is an incredible design. But we’re hoping [the new design] starts a conversation in more subtle way than a Mr. Friendly design shirt does,” he said.

When the winning design is selected, Ruff Riders will print the shirts and they will be distributed by gay-fave retailer Boy Next Door for $20-$25, Prophater said. Dimensions are 11 ¾ by 11 ¾. More details can be found on Team Friendly Atlanta’s website.

“[The shirt] will have our logo and be specific to our team. And we will be promoting it through social media. The shirt will definitely have an Atlanta flare to it but not limited to only Atlantans,” he explained.

But how does a t-shirt help fight HIV stigma?

“For me, it’s about the actual campaign and everything that leads up to it,” Prophater said.

As designers sit in front of their sketch pads or computer screens and talk to others about what they are doing, asking for input and suggestions — all of this leads contributes to ongoing dialogue about HIV stigma, he explained.

Then when people wear a t-shirt with this design and someone asks about it, the dialogue continues with more people.

The idea for the t-shirt design contest is borrowed from Chandler Bearden, an outreach specialist with the MISTER Project of Positive Impact, Prophater said. Positive Impact provides mental health and culturally appropriate services to those with HIV.

By opening up a design contest to the public, Prophater said he hopes all people in the community “feel they have ownership and feel they are a part of Team Friendly.”