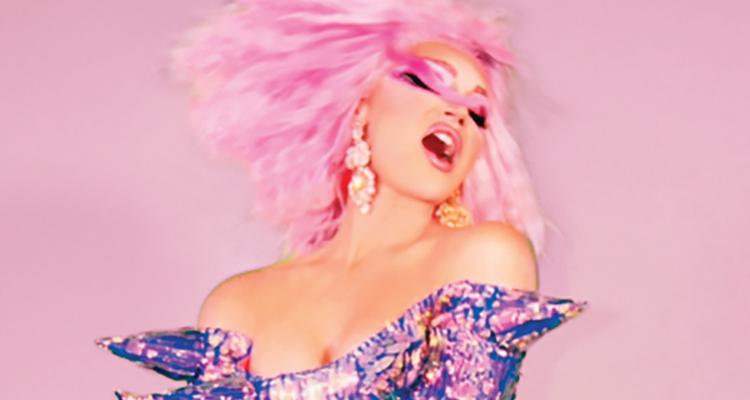 Katie Burkholder
Community
September 10, 2021
Kylie Sonique Love reflects on the sixth season of “RuPaul’s Drag Race: All Stars” and her win
Eleven years ago, Kylie Sonique Love (then known simply as Sonique) made history when she came out as transgender, becoming the first competitor on “RuPaul’s Drag Race” to do so. Now, the Georgia native has made history again by winning herself a spot in the Drag Race Hall of Fame. She took home the title of All Star at last week’s finale, killing her final lip-sync (with a smooth slip-turned-somersault save) in an over-the-top spiked holographic gown.
I had the immense pleasure of sitting down with Kylie, who divulged all the season’s details — from getting the call to winning the crown and all the twists, obstacles, and self-love in between.
Quotes have been edited for clarity and conciseness.
How were you feeling when you learned you were going to be on “All Stars”?
When I first learned I was going to be on “All Stars,” initially I was excited and then when  I hung up the phone reality hit me. I was like, “Oh my god, I have three weeks to prepare for something that’s going to be talked about for the rest of my life.”
We were in the eye of the storm of the pandemic — I was basically living off of everything I had saved up. I was pretty much down to $200 in my account. I had contemplated moving back to Georgia [from L.A.] right before I got the call. But I’ve struggled before in my past. I’ve made it work before, let’s make it work again. I have a pretty good support system, so I reached out to other artists and friends to see if they could help out. I was able to figure it out, but having three weeks to prepare was a struggle.
All in all, it was an obstacle, but I’m used to obstacles in my life. Like all the other ones, I got through it.
What do you think was the biggest challenge during the season for you — whether an actual challenge or a personal moment?
I think, for me, my challenge was a mental one. I knew this was something I wanted to come back and do for a very long time. I just don’t think season two was a [proper] representation of who I see myself as. I wanted to make sure that I was in a good head space. I would meditate, I would try to be cautious of what I put in my body, I wasn’t smoking weed, I wasn’t smoking cigarettes, I was eating healthy. I would have notes all up in my hotel reminding me to stay humble and use my voice — because that was something I didn’t get a chance to really do in my initial season — and not let my ego be the driver of the competition for me. What I’ve learned from my past is that whenever I rely on [my ego] and things don’t work out, I tend to beat myself up. That’s not a way to treat myself, especially in a competition.
I really wanted it to be a positive experience for me and for it not to just be a moment, but a movement. I wanted to look back and be proud of everything I did and said.
And it paid off! There’s this trend of girls from earlier seasons faltering when they get to “All Stars,” but you obviously didn’t have that problem. Did you experience any difficulty at all adjusting to “All Stars” after more than a decade of being off of “Drag Race”?
I had to pack my memories of season two up and throw it out and not even claim it. Both I and the show are so completely different since then. Like I said, I just wanted to be sure I was in a good place mentally and physically so that whatever happened I could take it on without any hesitation.
Let’s shift over to the Rudemption twist, which brought back Eureka and made the top four a top five again. What were you feeling when you learned about it?
It was just really cool to see all the girls come back [and lip-sync]. It was just so good to be able to just watch drag again. If you watch the episode, I’m literally smiling the whole entire time. I love drag! I love watching it, and I love how it makes me feel. It makes me feel inspired, and I know if it makes me feel like that, then those girls up there competing to come back to this amazing show are feeling all these emotions. It just made me so happy, because I know what it feels like to want to come back and show who you really are.
One final question, and it’s the obvious one: What does winning and being inducted into the All Stars Hall of Fame mean to you?
For trans people who don’t get to see trans people win in anything in life, to see a trans person win is incredible. It means the world to me, but I gotta keep moving. Winning  is temporary.
This is an opportunity for me to try to do all the things I’ve ever wanted to do. There’s so much more I want to do. I want to pay homage to all the people who went out and lived their dreams and didn’t need permission from anybody. We don’t need permission to be ourselves.