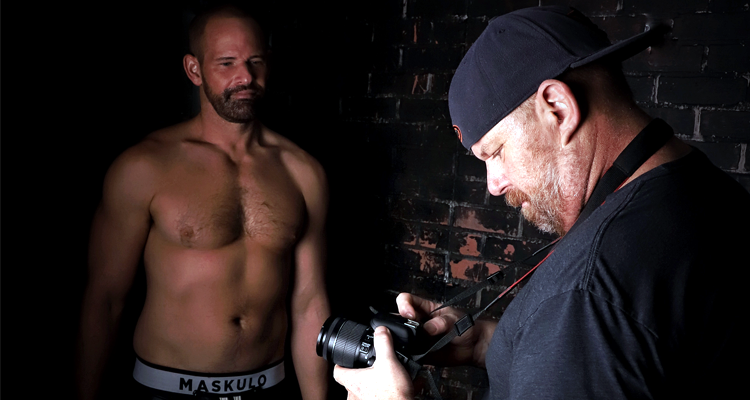 The Art of Working for Free

It’s a space filled with several large lights, a massive black paper backdrop, and several hooks on a brick wall connected to large steel chains. There’s a large a/c unit in the corner of the room set to a brisk 68 degrees to keep clients cool and relaxed. From Brian McCall’s photos, you’d expect his set to be a large industrial space somewhere in the Cabbagetown district, but it’s as simple as his guest bedroom in his east Atlanta home. It’s where his work began as a photographer after years behind a desk in corporate America.

“I started with the US Olympic Softball team in 1996 as the director of PR and marketing. I would travel with them, tour with them, but we couldn’t afford a photographer, so I started doing photography for the team back then,” McCall said. “In my current role and genre, I started almost three years after leaving the corporate world during a buyout,” he said. “I took a severance, had six months to figure out what my next move was going to be and my passion, and I found it in photography.”

The beginning stages were somewhat difficult, as McCall worked to build his portfolio and gain credibility in this new venture. It meant snapping photos with little to no pay, but would it be worth the effort? It’s what many artists have to do in the beginning of their careers, but for McCall, would it be worth the effort? “I got named as the official photographer for a new leather event coming to town. I was named because I was friends with the person running it,” said McCall. “I just had to build a portfolio. It was six months out from this event, so I just had friends at the time, come pose and model for me, and I built my portfolio up.”

While McCall got to create his own schedule, work at his own pace in his own home, and build up his clientele, he was doing so without the comforts of a guaranteed paycheck like he’d been used in his past nine to five job. “The stress level really changed,” he said. “Owning your own small business, it’s not always that consistent. You’re constantly doing whatever it takes to make it work.”

As time went on, McCall found his niche, turning his once amateur dream into a professional reality, shooting hundreds of clients in many different forms, now with a price. From weddings to headshots, and his specialized kink and fetish shoots, the demand for McCall’s masterfully lit snapshots increased. So did the pay.

“As time has gone along, the comp shoots or time for photo shoots have been reduced. I can’t afford to do free shoots as often, and I now have a pretty solid portfolio,” said McCall. “If there’s a person that it makes sense for us to work together because they have a big social media follow or it’s somebody that’s going to help market my brand as well, a lot of times I will work with them at a reduced rate or comped rate.”

But McCall says there’s a deeper meaning behind his photography and that makeshift studio in his home. It’s about creating a space of acceptance and confidence many of his clients have yet to find. That is until they step in front of his camera lens.

“What people don’t understand and realize is, the people I work with have never done a photo shoot in a studio. Of those, 90 percent of those people have some type of body dysmorphia that they didn’t feel like they were ready for a shoot or they needed more gym time or needed to lose more weight,” he said.

McCall sits down to talk to his clients about what they want out of their session, highlighting that he rarely does touch-ups to his photos out of a need to give those in front of his camera a sense of their own reality. “100 percent of people who came in said it changed the way they looked at themselves,” he explained. “It’s something that I’m giving back and helping people through this and they can feel better about themselves.”

As technology becomes more advanced, and many look to their smartphones for their own bathroom photoshoots, McCall can feel confident that his work exceeds the special features Instagram or editing apps have to offer. He offers up an experience that keeps him and his clients coming back for more.

“The more that your name is out there and the more people respect your work then they see the value in it,” said McCall. “I feel like I’m way underpriced but I feel like it’s a fair price for the work that I do. People seem to think so as well.”

What’s in store for McCall as he continues to bring kink and fetish masterpieces to the social media world? He’s about to start touring the country to bring McCall Studios to his clients. “You have to think outside of the box,” he said. “Sometimes you have to go to your clients rather than them come to you.”

There’s a consideration for a coffee table book in the near future. It’s a chance for McCall to solidify his name, his brand, and his images into photo history one snapshot at a time.