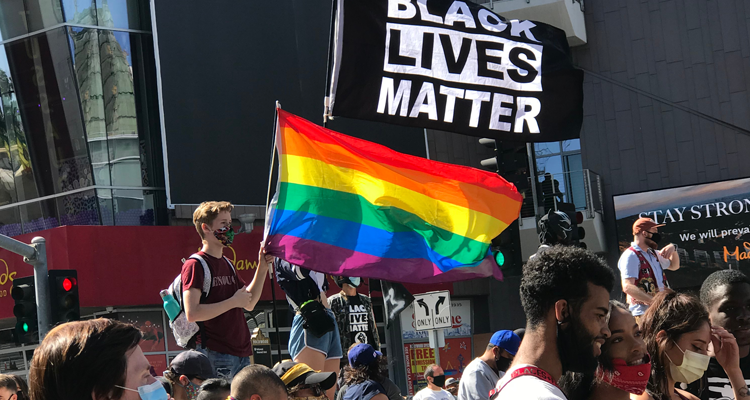 The year 2020 is a year we won’t soon forget — a global COVID-19 pandemic, Black Lives Matter (BLM) protests against police brutality and systemic racism, a stock market crash, presidential election and deadly wildfires in California and Washington state are just a few of the apocalyptic events that will be forever linked to 2020.

The world as we knew it began to unravel with the arrival of the coronavirus around March. Schools, businesses, gyms, clubs and restaurants all closed as the number of cases of people contracting the highly infectious virus began to rise.

The government was at odds under the divisive leadership of the 45th President, Donald Trump, who along with most Republicans failed to see the pandemic as real and did little to promote and support masking, social distancing and cities going on lockdown.

The state of Georgia went on lockdown in April with Governor Brian Kemp’s shelter-in-place mandate. Businesses, restaurants and bars were impacted. Jobs were lost and food insecurity was at an all-time high nationwide. Some relief finally came when lawmakers agreed to a stimulus package that sent out $1,200 for individuals who earned $75,0000 or less and $2,400 to married couples earning up to $150,000 and an additional $500 per child. Unemployment insurance was also expanded by 13 weeks and included a four-month enhancement of benefits — an additional $600 per week in addition to what state unemployment programs pay.

Then came the summer season — but this time it was a summer of a different kind of fun. Family vacations and air travel were discouraged. Summer family reunions, BBQs, weekend dinners and barhopping weren’t happening — at least not without consequences. Instead of the typical vacations, people got creative. Bikes sold out everywhere as family members got out and rode around their neighborhoods, people pulled out their old skateboards and roller skates, drive-in movie theaters made a come-back and concerts were held online.

For months, COVID-19 was the hot topic of many news outlets, but just when it couldn’t get any worse, there were deadly wildfires burning through millions of acres from California to Washington state.

But, those wildfires wouldn’t be the only fires that would erupt. Racial tensions and police brutality were at an all-time high, and enough was enough. The continued police-involved killings of George Floyd, Ahmaud Arbery and Breonna Taylor sparked a wave of peaceful and sometimes violent protests and riots across the world in an effort to end police brutality and racial injustice.

Black Lives Matter (BLM) groups led peaceful demonstrations pleading for fairness and accountability. While some alternate groups infiltrated the BLM protests, BLM remained on course to bring attention and change to the racial injustices that Black people and people of color face on a day-to-day basis.

It was a movement headed by young people reminiscent of the 1960s Freedom Riders, who rode buses through the South fighting the segregation laws of that time.

Although we lost Atlanta icon and civil rights leader Rep. John Lewis, one of the original Freedom Riders, this summer to pancreatic cancer, Lewis influenced many, and his legacy will continue on. One of his proteges, former gubernatorial candidate Stacey Abrams, picked up his fight for fair elections and voting rights, and Senate Democratic candidate Jon Ossoff is in a runoff election against Republican candidate David Perdue.

As election season grew near, the tides began to shift. Abrams and her fellow voting rights activists were instrumental in helping to put President-elect Joe Biden into the White House as the country’s 46th president. She was instrumental in flipping Georgia blue. Biden also made history by choosing Senator Kamala Harris as his vice president, as she has become the first Black and the first Asian American to become vice president.

Abrams and her fellow voting rights activists are working again to get people to vote early or to vote by mail to cast their votes for Ossoff and Rev. Raphael Warnock, the two Democratic Senate candidates in the January 5 runoff election.

After the election season began to fade, the much-anticipated holiday season took center stage. As we enter the holiday season and await the New Year, we’re still encouraged to mask up, social distance and stay away from large gatherings, especially indoors. The 2020 holiday season has been different, but families and friends have found ways to be together for the holidays with the help of Facebook Live, Facetime and Zoom. Some are holding smaller outdoor family gatherings to celebrate and spend time together. People have begun to realize the importance of families, friends and connecting to check in on old friends and long-distance family members.

In the face of tragedy, people bounced back. In the face of uncertainty, people adjusted. In the face of hatred, people chose to fight against it. 2020 has been a horrible year, but there has been success among the adversity. This year revealed the true strength of the human spirit, and I think that’s something to celebrate.