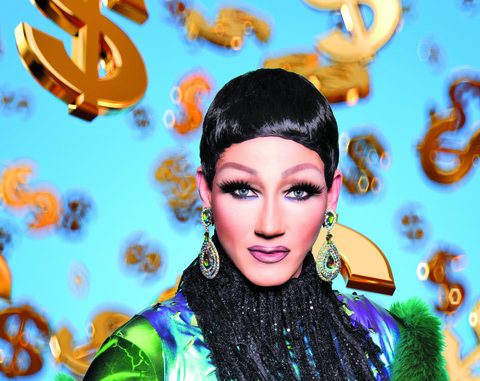 The Business of Drag

Many people do not think twice about drag as a business. In reality, drag has become a multimillion-dollar industry during the past decade, largely due to the influence of the popular VH1 show RuPaul’s Drag Race. When I first started working, some of my closest friends were worried there weren’t enough drag queens to photograph. The truth is … there’s an abundance of entertainers, and I want to capture more!

Let’s start with the basics: becoming a drag entertainer is not easy or cheap. I recently spoke with Jaye Lish, from Costumes, Etc. and a cast member of “The Other Show,” about the expected cost of creating a character. Jaye said basic makeup can run from $100–$500+, ranging in type from drug store, to theatrical, to luxury makeup, and brushes can go from under $50 to $75. Wigs that can be bought at a beauty shop — shake-n-go versus a custom style — can range from $40–$600+. In this city, we have a few people who style and create wigs, like NavarreCreations, Gigi Monroe, and Katy Cakes Taylor.

You will also need a pair of shoes, on which can really spend whatever you want. Jaye recommends having at least a good beige and black heel that can last about two years. If you desire curves, you may consider buying or making some pads to create them, which can cost from $40–$150+. In order to get the pads to hold, you will probably want to get various pairs of tights. Most queens use anywhere from 4–6 pairs, which can range from $6–$18 per pair.

Many entertainers have bras, and some have bandages to flatten their chests. Either of these can be around $20. If you want to fill up your bras, you have various options, such as silicone breasts or breastplates, which range from $300–500 a plate and can be found at Elea’s Closet. Jaye also reminded me about razors; many entertainers need to shave. These can add about $30 a month to your cost.

But that’s not all yet! We haven’t gotten to jewelry, clothes, or accessories (belts, glasses, bling), and those expenses really add up. Local businesses that cater to these needs include Costumes, Etc., Chris Tyler Designs, House of Canney, Taejah Thomas, and Elea’s Closet.

Lish said that when she started doing drag, she was spending about $150 a month and shopped at Ross or thrift stores. By her third year, her monthly spending ran up to about $5,000.

Once you have your look, you then want to have professional shots made for promotion. I would say that most can run from $150 to a couple of thousand. Photographers in town like me, who specialize in drag photography, are Jon Dean, Blake England, Mark Morin, KenDollMix, and Just Toby’s team member, Martin Kincade.

Now I want to shift gears and discuss the actual business of show business. Obviously, many of us like to be entertained and see a show when we go out. Atlanta has a variety of shows at bars around the city, as well as folks like WUSSY magazine, House of ALXNDR, and Atlanta Pride, who provide huge platforms and events for our community. Many of these performances have show directors — like Edie Cheezburger, Phoenix, and Maya Rose Monroe — who are responsible for booking entertainers, creating an ambiance, and making sure a show stands out. Of course, entertainers get paid for their time. The amount of money entertainers are paid ranges from $50 to maybe $30,000 per show, depending on who is entertaining. This inconsistency did not just start with shows like RuPaul’s Drag Race, although they did have a huge impact. This variability already existed in the pageant community with queens who had made a name for themselves. These differences can be huge, and many refer to it as the “local queen” fee versus the “RuPaul” fee.

Huge productions, like touring companies, provide financial stability to many entertainers, companies, and their employees. Tours are how many of the well-known queens make their money, either with a production company (like Voss Events and Murray & Peter Presents) or on their own (like Bianca Del Rio, Coco Peru, and Lady Bunny). Ticket sales can range from $50 to more than $150, and most tours sell out in many cities. During these tours, entertainers get to sell their merchandise to their fans across the country, including shirts, pins, prints, books, music, hair, and makeup. Some well-known queens have reached millionaire status through these diverse ways of managing their brand. Appearances at conventions like RuPaul’s Drag Con — where fans can spend over $10 million in merch in just a few days! — are also highly profitable.

Finally, I need to mention that the musical aspect of drag is growing fast, creating another platform and income stream. Drag artists like Shery Vine, Lady Bunny, Devine, Trixie Mattel, and Adore Delano are also musicians. Locally, we have many amazing recording artists and entertainers, like Malachi Malachi, Taylor Alxndr, and Alissah Brooks, to name a few. Taylor Alxndr told me: “I think people are starting to take drag musicians seriously — and that is in part due to RuPaul’s Drag Race … for a long time, drag music was limited to club songs ….” Now, artists like Taylor and Alissah have been recognized internationally, which opened doors for many well-known fellow musicians. They invest in their look, the video, studio, set, and production to create art that maybe one day will get them to be headliners at a music festival or even win a Grammy.

Another way drag entertainers are also making money is in TV & film. Due to the increased popularity of drag queens in mainstream culture, we are seeing many drag entertainers in the big and small screens. If you saw “A Star is Born,” RuPaul’s Drag Race favorites Shangela and Willam appear in the movie with a good amount of screen time. As Atlanta becomes the Hollywood of the South, we are seeing a huge amount of work for our queens in Atlanta. Entertainers like Brigitte Bidet, Nicole Paige Brooks, Alissah Brooks, Phoenix, Monica Van Pelt and Edie Cheezburger have all made cameos on prominent shows.

At the end of the day, drag entertainers are investing in themselves as a brand while helping other gay businesses succeed. Drag is not easy. Nevertheless, it can be profitable. Many focus on their brand and persona, getting to be successful with hard work. Next time you see a queen — no matter if they are new, seasoned, or famous — tip them a dollar, or make noise by clapping or snapping your fingers. Let them know you appreciate their hard work. After all, entertainers are there working for you to enjoy.