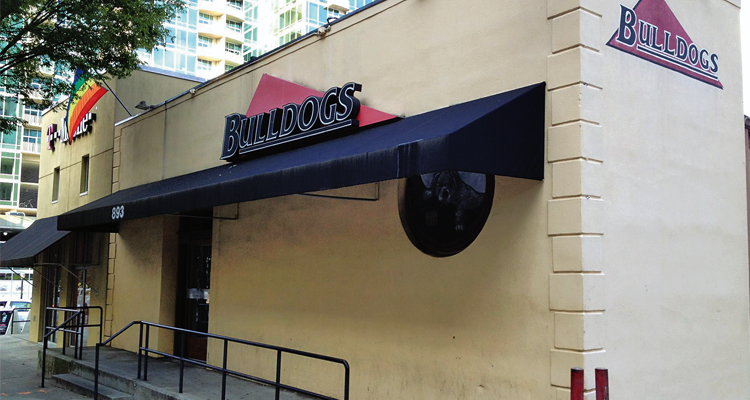 To be Black and queer and free, one must establish a home and find or form a family to which one can be held whole as they are. Thirty years ago, Black queer Atlantans were acting as if they dared believe that they could be free. They dared boldly as all Black people must do or perish, to claim their own territory, to reform themselves as a proud people with recognized rituals and places for respite, recreation and resistance. They were running clubs, founding organizations, holding space, attesting to themselves that they mattered, and would hold themselves accountable to each other as never before. The ‘90s were the definitive moment in which Atlanta’s Black queer community declared itself as such by occupying brick and mortar sites and rendering services to their own.

Back then, the club was still the cornerstone of queer social life, an indispensable institution for community building in Atlanta. Anti-Black discrimination was quite the normal practice of white-owned bars – including Bulldogs, which now relies solely on Black patronage. Black patrons were routinely rejected by demands for extra pieces of ID at the door. “They didn’t want us there, so we didn’t mix,” said Dallas Collier, a well-known hair stylist.

Black bars began springing up in the mid-‘80s not only in response to institutional racism; Black gays were outgrowing the need for “discreet” (as in closeted), invitation-only private mixers that typified the ‘70s. Henri McTerry was one of the most prominent figures during this shift. Collier recalled McTerry’s popular tea dances at Alexander’s, a restaurant in the Southern Bell building. He cited the Marquette as the oldest existing gay bar. There was a demand for more bars that provided space, music, and stylings that fit Black cultural tastes. Opened in 1984, Foster’s Lounge was one of the first such venues. Owner David Foster, a Detroit resident, opened his bar after having his girlfriend Loretta Young apply for the liquor license. Foster’s was widely popular among Black men until the eponymous owner had to shut it down due to legal challenges. In 1986, Young transferred the license and named her new bar after herself: Loretta’s. Loretta’s far surpassed the success of Foster’s and became Atlanta’s flagship bar. By 1989, another venue emerged as if to usher an oncoming expansion of local Black queer nightlife. Traxx/Warehouse was twice the size of its predecessor. It was the first spacious Atlanta spot to rival the large clubs found only in major hubs like New York and Washington DC. While the Ritz Boys including Phillip Boone and the late David Hampton had been organizing parties all over town, Traxx was their flagship achievement. Other watering holes lining intown included the In-Between, Pearl Garden, Waterworks and The Palace.

Amidst a male heavy landscape, Black lesbians were creating social spaces as well. Gloria McClury was a prominent social organizer known for her intown women’s parties. She and McTerry (both deceased) enjoyed a great deal of mutual respect and affection. In 1988, she opened Friends at the corner of Spring and 3rd across from Loretta’s.  In 1990, a white lesbian couple Beverly McMahon and Dana Ford opened the Otherside Lounge at 1924 Piedmont. The Otherside primarily catered to women and was open to all genders. They established an R&B night on Wednesdays that drew a mostly Black crowd of lesbians, gay and bisexual men, and transgender folks, and it became one the most diverse parties in the city.  In February 1997, the Otherside was bombed, and several patrons were seriously injured. McMahon and Ford eventually reopened but were unable to fully regain the crowds that came before the bombing and closed in 1999. For a short time, the sisters also congregated at Texas, a restaurant rented by the Black lesbian organization Hospitality Atlanta for weekend dance parties. Founding member Jocelyn Lyles noted that “people came to Texas because they felt a sense of belonging”.

The clubs were not the only brick and mortar sites to serve Black LGBTQ community. The ‘90s also saw an outgrowth of advocacy organizations, churches, and service providers housed throughout the city. In 1997, the Atlanta Lambda Center opened at 828 West Peachtree to share the same building as AIDS Survival Project and the Atlanta Pride Committee. Influenced by artist/activist Tony Daniels, the Lambda Center housed a number of Black queer-led organizations and events including Speakfire, a spoken word gathering that attracted all genders. Tony Jones, former pastor of Unity Fellowship of Atlanta, recalled how instrumental Daniels was securing an affordable fee for Unity Fellowship: “They knew that as a grass roots organization, we needed a seat at the table we could afford.”

Jones listed City Hall East (now reconfigured as Ponce Market) as a significant resource for Second Sunday, the era’s most popular Black gay men’s support organization. Jones acknowledged that before his arrival from New York in 1996, there were earlier affirming places of worship led by openly gay Black pastors: Circle of Love founded by the late Pastor Stephanie Williams and The Shepherd’s Table led by Elliott Somerville.

The AIDS epidemic intensified the need for increased mobilization and social intimacy.  Second Sunday founder Maurice Franklin acknowledged that the group which was founded “to save our lives.” Anthony McWilliams a veteran artist/activist recognized that Deeper Love Project at AID Atlanta functioned as more than an HIV prevention program for Black gay and bisexual men.

“It was so much more than the intended mission,” he said. “One of the stories I carry about it, is about men meeting lifelong friends.”

He recalled meeting Maurice Cook, a prominent graphic arts designer at a Second Sunday meeting. Cook would go on to design several of McWilliams album covers and become one of his dearest friends.

“In these spaces, I found the community that helped to save my life, and gave me purpose, the activism, I found my life,” McWilliams said.

Many who came of age before smart phones and social media feel a deep sense of loss as clubs and other physical venues are disappearing without being replaced. Largely in response to COVID-19, the popular use of Zoom means shifted our social sphere from physical reality to onscreen projection. For Black LGBTQ people of a certain age, this registers as a loss of options for affirming in-person spaces. Some have been able to adapt and maintain social interactions and avoid isolation. Others arguably in the majority may feel cut off and left with less support. While we can see and hear each other, we cannot hug or feel a handshake, nor can we smell another’s scent through a computer screen. These sweeping changes to our way of life have incurred benefits along with the losses. How might a history of Black quee-centered cultural sites and in-person gatherings teach us to improvise newer ways of real connection across and within generations? As we learn more of our history including our tradition of creating change through creating space, we may clearly see ourselves as a people within a people with a past of glories and scars, facing a present we determine day by day. As we accept both the inevitable nature of change and our proven ability to innovate and adapt, we may trust the promise within an always uncertain future.