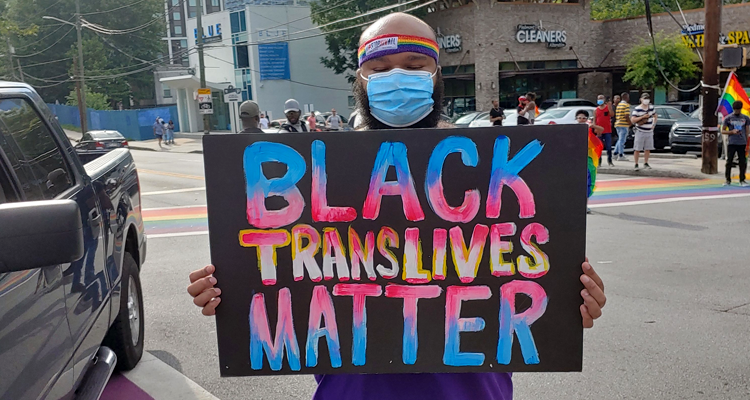 A month after the murder of George Floyd, the movement against white supremacy remains strong.

In Atlanta, a distinctive feature of the protest movement has been its emphasis on intersectionality, with substantial LGBTQ participation.

Just after five in evening on Friday the 26th, a multiracial group of protesters, including many from the LGBTQ community, gathered outside a bookstore near Little Five Points. The crowd contained between one hundred and two hundred people.

This was only one of innumerable protests taking place throughout the city of Atlanta on any given day.

Georgia Voice reached out to several people who have been involved in the protest movement, in addition to observing two of the numerous Atlanta protests.

Brandon Alston has been active in the anti-white supremacy protests since they began a month ago. He spoke with Georgia Voice about his experiences early in the protest movement and the tactics police and the National Guard used against protesters at that time.

When protesting outside the governor’s mansion on the second night of the uprising, he and other protesters faced a tense confrontation with the police and the National Guard.

“Everything started off pretty peaceful, we were just chanting [from the sidewalk] across the street [but] it was really crowded, so the sidewalks were packed and some people were trying to move around and stepped into the street and the police started arresting people for it,” he said.

That is when police hostility started escalating, according to Alston: “a couple arrests were made, and it made people more antsy.”

The protesters started demanding the release of those who were arrested for entering the street to get around the crowd, “and that’s when this line of police in full riot gear came storming out of the gates at us firing rubber bullets.”

In response, the protesters kneeled down on the ground with their hands up, and the attack stopped.

“I guess it was too hard to shoot a bunch of kneeling people,” Alston said.

But then news came that the National Guard was about to arrive.

An organizer ordered all the white allies to the front in the hopes of protecting the Black protesters from the National Guard.

When the National Guard arrived, they blocked the way for many protesters to return to their vehicles. Alston could see that they were putting on gas masks in preparation for using tear gas on the protesters.

At other protests he attended, police repeated similar tactics, including surrounding protesters in order to prevent their retreat, leading to the often-violent mass arrests of peaceful demonstrators.

In the more recent protests so far observed by this reporter, interactions with the police tended to be less violent.

On the afternoon of June 28, the “Beauty in Colors Rally,” led by a group of Black LGBTQ organizers to commemorate the start of the Stonewall Uprising and protest against racism, gathered on the 17th Street bridge before marching to Midtown. The march and rally had a small police escort, and proceeded without incident.

Meanwhile, the Little Five Points protest, held a couple days prior, had only a brief encounter with the police that ended peacefully with no further confrontation.

At the “Beauty in Colors Rally,” Atlanta NAACP Vice President Gerald Griggs addressed the crowd on the need for intersectionality and the intertwined nature of the fights against racism and homophobia. He spoke briefly with Georgia Voice, saying: “the NAACP is the oldest civil rights organization in the state and we stand in solidarity with our brothers and sisters that are celebrating pride and we want to be a vehicle to help continue that change and to make change intersectional.”

Other speakers at the rally stressed similar themes, including the need for white and straight allyship, the recent passage of legislation to protect the Black and LGBTQ communities, and the whitewashing of the history of Stonewall.

The protest movement shows no signs of abating soon, with many future events scheduled.

The organizers of the Little Five Points protest hope that it will become a weekly recurring event with a short march every Friday evening.

Larger, one-off protests against racism are also being scheduled for the Fourth of July Weekend, with the national “March for Liberty and Justice for All” planned for the Fourth and a Black Lives Matter protest on the 5th.

For those looking to find out when and where protests are happening, the Twitter account @WhereProtest regularly retweets protest announcements for events in the Atlanta area.