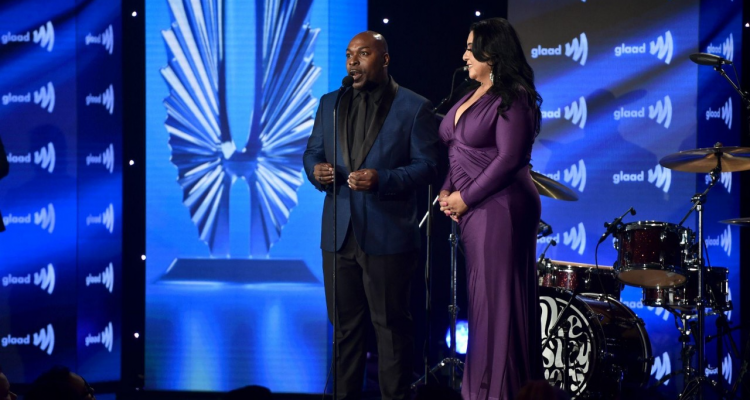 For the second year in a row, the Counter Narrative Project’s (CNP) “The Reckoning,” an online publication dedicated to sharing thought-provoking and unique stories about Atlanta’s Black LGBTQ community, has received a GLAAD Media Award nomination for Outstanding Blog. Darian Aaron, the Editor-at-Large of “The Reckoning” and the Communications Director of CNP, attended the ceremony in Los Angeles, California (which is now available to stream on Hulu).

Aaron was a featured speaker at the event alongside Gilead Sciences’ Diana Feliz Olivia. The two spoke about the need for greater representation of LGBTQ people of color in the media to break the stigma driving new HIV infections, and how storytelling can eradicate stigma and elevate facts about preventing and treating HIV.

Following the nomination and his appearance at the 33rd Annual GLAAD Media Awards, Aaron spoke to Georgia Voice about the experience and the importance of accurate media representation of Black queer people living with HIV.

What was the experience like attending the awards ceremony?

Incredible! It was simply incredible, I’m still kind of pinching myself and making sure it wasn’t a dream. Never in a million years did I think that my first time at the ceremony I would be on stage. It was a wild experience, it’s one I will never forget. It was really special because “The Reckoning” was nominated in the Outstanding Blog category for the second year in a row, and we’ve just been doing some really great work. It feels amazing to be acknowledged with a nomination from GLAAD.

How did you feel that The Reckoning was nominated for Outstanding Blog?

I felt validated to some degree.

One thing that’s always important to me is that Black LGBTQ stories are represented in media because so often our stories are overlooked and underrepresented. So I feel like it’s my job as the Editor of “The Reckoning” to find those stories that are going untold, and then to tell those stories with the respect and sensitivity they deserve, because that doesn’t always happen.

That leads into my next set of questions about the importance of accurate representation in the media and how it has real-world effects. How does the mission of The Reckoning and the Counter Narrative Project align with GLAAD’s mission in terms of this idea of representation?

Like GLAAD, CNP believes great storytelling has the ability to change hearts and minds, to influence policy, and to improve lives. One of the things we talked about during our onstage moment was HIV is not a crime. CNP is currently partnering with organizations like the Georgia HIV Justice Coalition to make sure that HIV criminalization laws are updated. It’s so important that those stories are out there on the forefront and people who are not used to seeing their lived experiences reflected in media have the opportunity to see themselves through the work we’re doing on The Reckoning, at CNP, and through the work GLAAD is doing as well. That goes a long way with HIV prevention efforts; if someone knows their life has value, then they’ll wear a condom, they’ll adhere to PrEP. It’s really important that we’re able to elevate those stories so people who look and love as we do understand that their life has value and meaning and that their stories are worthy of being told.

To quote part of your speech, accurate on-screen representation “helps eradicate the stigma that too often blocks HIV prevention like PrEP.” Can you talk a little more about the connection between fictional, or nonfictional, portrayal in the media and the real-life impacts it has on people living with HIV?

There’s not a lot of Black queer representation in mainstream media, and there’s definitely not a lot of Black queer representation of people living with HIV. The most recent example I can give you is Pose, groundbreaking television but no longer on the air. So we have to figure out ways to fill that void. But Pose provided an opportunity for the world, not just people within the LGBTQ community, to be able to see people who are not only living with HIV but thriving with it. Pose takes place during an era where HIV was literally a death sentence, but it is no longer a death sentence. But a lot of people, even within our community, are still not educated about PrEP. There’s no reason now to contract HIV, there are ways that you can avoid coming in contact with the virus. Sadly, even a lof of Black queer men are not as educated as we would like them to be about the benefits of using PrEP. The media can play a huge role in getting that message out and educating people in a very entertaining and accessible way, and I think Pose did a brilliant job of that.