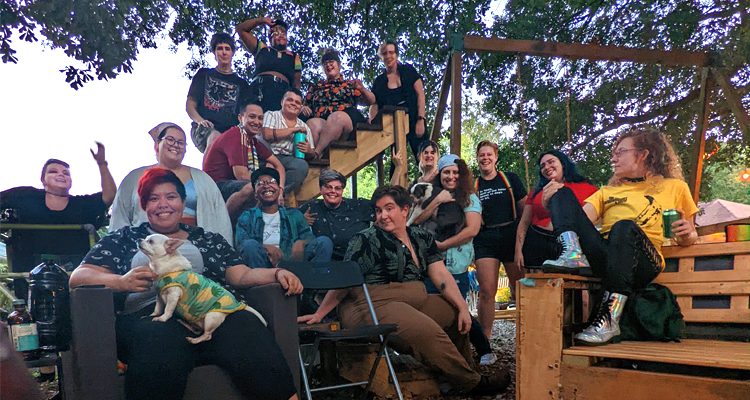 “It was started to create a space where folks could see more examples of nonbinary people hitting these milestones of adulthood, like getting married, having children, and buying a house.”

This is how Sylvan Tomlin describes Nonbinary & Genderqueer Atlanta, a support group for individuals who identify as transgender or otherwise outside the gender binary.

Tomlin, who is one of the organizers of the group, said that the peer-led group gives trans, nonbinary, and genderqueer adults a space each week to support each other, share wins, and cultivate a community.

Founded in 2018, the support group has been “bringing adults outside of the binary together in a safe & affirming space,” according to its Instagram bio, and providing a free resource to Atlantans who exist outside of the gender binary.

Tomlin said that while there are certainly ways that people both in the LGBTQ community and out of it could better support the trans, nonbinary, and genderqueer community, many people have become more accepting over the past few years.

Tomlin described a social landscape where the trans, nonbinary, and genderqueer community wasn’t always accepted into the LGBTQ community and where cis/het individuals felt that accepting diversity in sexuality was enough.

“I think we’re getting into a place where that is falling out of fashion,” Tomlin said.

Even with this progress, internal and external support is still wanted and needed by this community.

The group’s founder, Jenny Bishop, was interested in creating a community where people could see representation of transgender, nonbinary, or gender-nonconforming individuals achieving milestones of adulthood. Bishop had the idea when, in the process of starting a family, they realized that they didn’t know where to start. Tomlin pointed out that, because we don’t see representation of people who are trans or identify outside the gender binary in the media, lots of people haven’t seen the examples of those like them simply going through normal experiences, such as having a child, that are easier for cis people to see.

“It’s also sort of grounded in the context that, as trans people, more than doctors, more than psychiatrists, we are experts in our own mental and medical health care,” Tomlin added. “There is no greater resource than each other.”

Tomlin also said that many trans and nonbinary people just want a place to hang out and chat: “I think a thing that a lot of people are aching for is […] a place for trans people to just exist and just be outside of their homes that aren’t centered around alcohol and nightlife.”

The groups also allow trans and nonbinary people to share helpful resources and information with each other, such as doctors and clinics that can prescribe or offer hormone therapy and treatments. Even in a city as large as Atlanta, the health care needs of the community are scarcely met; Tomlin said that Atlanta only has about nine doctors that write prescriptions for hormones.

Tomlin said that, despite the various circumstances that continue to make the support group a sought-after resource for trans and nonbinary Atlantans, there are so many positives that come out of the group’s meetings.

“My favorite moments are when I hear that members of the group went and hung out outside of a group meeting,” said Tomlin.

The group has helped create a diverse and supportive community that trans and nonbinary Atlantans can rely on. “We span race and age,” Tomlin said, “and it’s obvious that it’s not something that just appeals to young white people.”