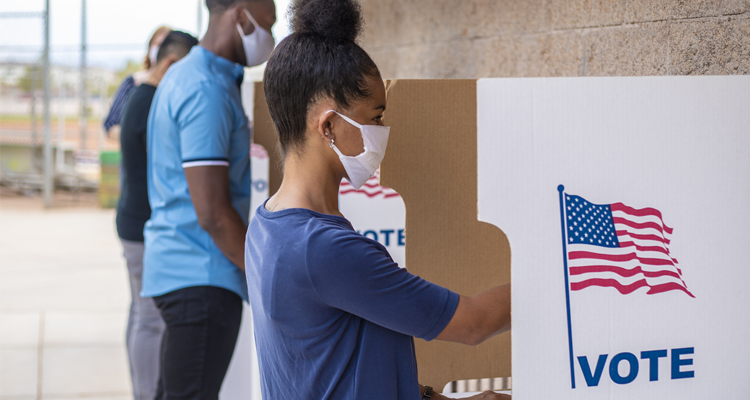 The road to electing the next president has been a contentious one as Americans choose between incumbent President Donald Trump and former Vice President Joe Biden.

Throughout the campaigns, talk of voter suppression was a hot topic in the news and on social media. In an effort to counter expected voter suppression, a number of organizations reached out via telephone and text urging people to vote and asking people if they experienced any problems at voting sites.

Determined to make the election process fair for everyone, Georgia’s first Black gubernatorial candidate, Stacey Abrams, founded Fair Fight Action after the 2018 election. According to the organization’s website, Abrams launched the organization after witnessing the mismanagement of the 2018 election by the Secretary of State’s office. The mission of Fair Fight Action is to fund and train voter protection teams in 20 battleground states.

“Georgia’s 2018 elections shone a bright light on the issue with elections that were rife with mismanagement, irregularities, unbelievably long lines and more, exposing both recent and also decades-long actions and inactions by the state to thwart the right to vote,” according to the Fair Fight Action website.

Now, with the volatile climate we see nationwide, many Americans are ready for a change — a positive one, at that. Many citizens, politicians and celebrities have taken to social media and other platforms to encourage people to take part in their civil duty and vote. Beyond encouraging folks to turn out at the polls, there have been many people posting voter rights and what to do if they face problems at their polling precincts.

Demand the Vote is a group organized after the 2016 election by a group of Los Angeles locals who were concerned about the direction the country was going. Their goal is to find ways to help improve a host of issues, including immigration, criminal justice reform, climate change, reproductive rights, LGBTQIA equality and voting rights.

According to Demand the Vote, voter suppression “is any effort, either legal or illegal, by way of laws, administrative rules and/or tactics that prevent eligible voters from registering to vote or voting.” The targets of voter suppression are often people of color. “Regardless of ethnicity, voter suppression also impacts women, queer and trans folk, disabled, low-income and unhoused, elderly and college student voters,” the organization contends. “And, statistically, all of these voters tend to vote for Democrats.”

Early voter suppression began in the post-Civil War Jim Crow era, when African Americans were denied their right to vote, hold jobs, and get an education. During that time, in Southern states, African Americans were subjected to literacy tests or were forced to pay a poll tax to be kept from being able to vote.

Although folks are no longer subjected to literacy tests or forced to pay poll taxes in order to vote, voter suppression comes today in the form of hours-long lines and registration purges. According to Fair Fight Action, 1.6 million voters were purged from the voter rolls from 2010-2018, voter registrations have been held in pending status (80 percent of these registrations were from people of color), and absentee ballots have been lost or rejected, disenfranchising voters — in particular, voters of color.

On October 12, early voting began in Georgia. Not long after the polls opened, people began posting pictures and videos of hours-long lines to vote to their social media accounts and news outlets began reporting on the long wait times. But, despite the long lines, the people came with lawn chairs and snacks, determined to wait it out and cast their ballot.

According to The Guardian, on the first day of early voting, “eager voters endured waits of six hours or more in Cobb County, which was once solidly Republican but has voted for Democrats in recent elections and joined lines that wrapped around buildings in solidly Democratic DeKalb County. They also turned out big numbers in north Georgia’s Floyd County, where support for Donald Trump is strong.”

Long lines and even rain still didn’t deter people from staying in line to cast their vote in this election. According to a recent article in the Atlanta Journal-Constitution, by Friday, the last day of early voting, nearly 3.9 million Georgians had voted in person or by absentee ballot, which accounts for 51 percent of all registered voters.