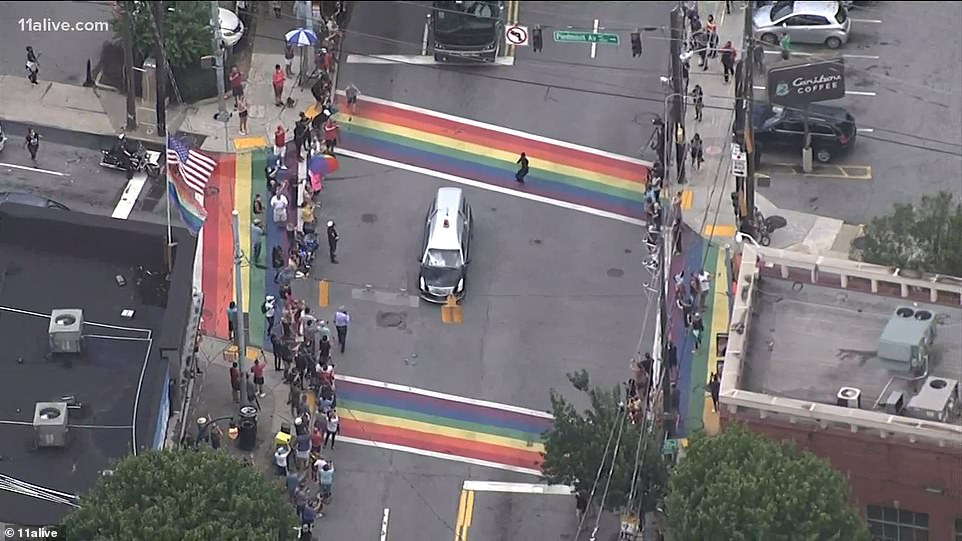 The hearse carrying the late civil rights leader John Lewis took a brief pause at the rainbow crosswalk in Midtown to honor his LGBTQ legacy.

A motorcade procession drove through Atlanta on its way to the Capitol yesterday (July 29), before his funeral today (July 30) at Ebenezer Baptist Church in Downtown. As the hearse drove through the city, it paused at the rainbow intersection of 10th Street and Piedmont Ave, seen in drone footage from WSB-TV and 11Alive.

The funeral of the civil rights hero and long-time LGBTQ ally, who died at the age of 80 after a battle with pancreatic cancer, was attended by former presidents Barack Obama, Bill Clinton, and George W. Bush. The church where it was held is where Martin Luther King Jr. served as a pastor.

While Lewis is best known for his work during the civil rights movement—he was one of the “Big Six” activists of the time and helped organize the historic March on Washington—Lewis is also remembered for his support of the LGBTQ movement. Throughout his 17 terms in Congress representing Atlanta, he was a vocal advocate for LGBTQ rights and co-sponsored more than a dozen pro-LGBTQ bills.

Bills Lewis supported include the Equality Act, the Respect for Marriage Act, and the Every Child Deserves a Family Act. After the Orlando Pulse shooting, Lewis led a congressional sit-in against gun violence, and when the Trump administration changed the Affordable Care Act to allow healthcare providers to discriminate against trans people, he spoke out.

“Our nation in is the midst of a public health crisis,” he said in a press release two months before his death. “Never before has respecting the dignity and worth of every human being been more important. At a moment when health care access for vulnerable communities is critical, the decision of the administration to issue this rule is a shame, a disgrace, and a blatant desertion of responsibility and duty.”