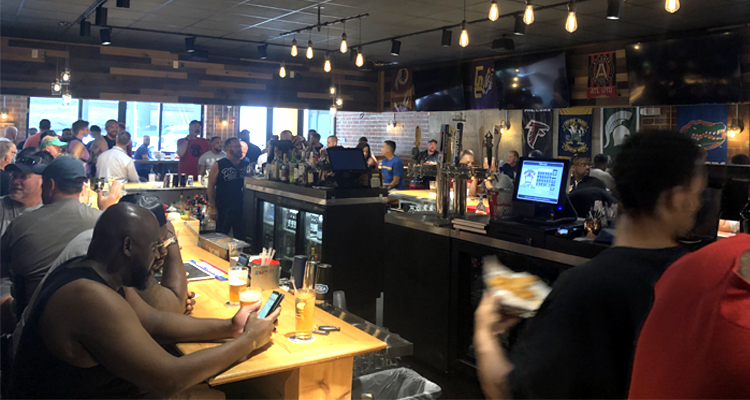 Patrick Colson-Price
Community
July 19, 2019
After several weeks of final preparations for its new location, Woofs is back open and serving up drinks, food, and good times in Atlanta. Last weekend, staff opened their doors to guests, and within hours, the bar was already packed.
“For the first day, it was so much more than I ever thought,” said bartender Dan Bergman. “We didn’t really push it. It was word of mouth. It was packed and by far the busiest day we’ve ever had.” He’s been with Woofs for 17 years, pouring drinks at the Piedmont Road location since 2002.
“I think a lot of us were really happy. It was old and it was time for a change. The new place is bigger,” he said. Owner Gregory Hughes made the announcement in March that many staff members including Bergman were hoping for.
“I try to create some of the original feel from the old space into the new space. People who know me well, who know the bar well, will walk into the new space and remember certain parts from the old space,” said Hughes during an interview back in March.
Regardless of ongoing renovations, guests filled in with draft beers flowing, a hot grill, and tables filled with chatter and smiles.“You can tell, it’s still a work in progress. TV’s aren’t up, but I don’t think people really cared,” said Bergman. “They were just glad to have the bar back. For many people, this is their home.”
Inside, brick walls and a full wood bar make the new venue almost twice the size of the old location. Tables surround that expansive bar with plenty of standing room at the front of the bar. Outside, a decent sized patio meets the I-85 overpass making for easy access to the interstate and right in the heart of Atlanta’s gayborhood. But he and many of his guests admit parking is a drawback, which makes Uber and Lyft rides or even walking a viable option. “We’ve had people that are down by Ansley Mall that walk here,” said Bergman.
But Bergman says regardless of the location, the size of the bar, and the newness of the venue, there’s one thing that will never run dry at Woofs. “It’s always kind of been the same vibe,” he said. “It’s just guys hanging out who like sports or guys that like guys who watch sports.”