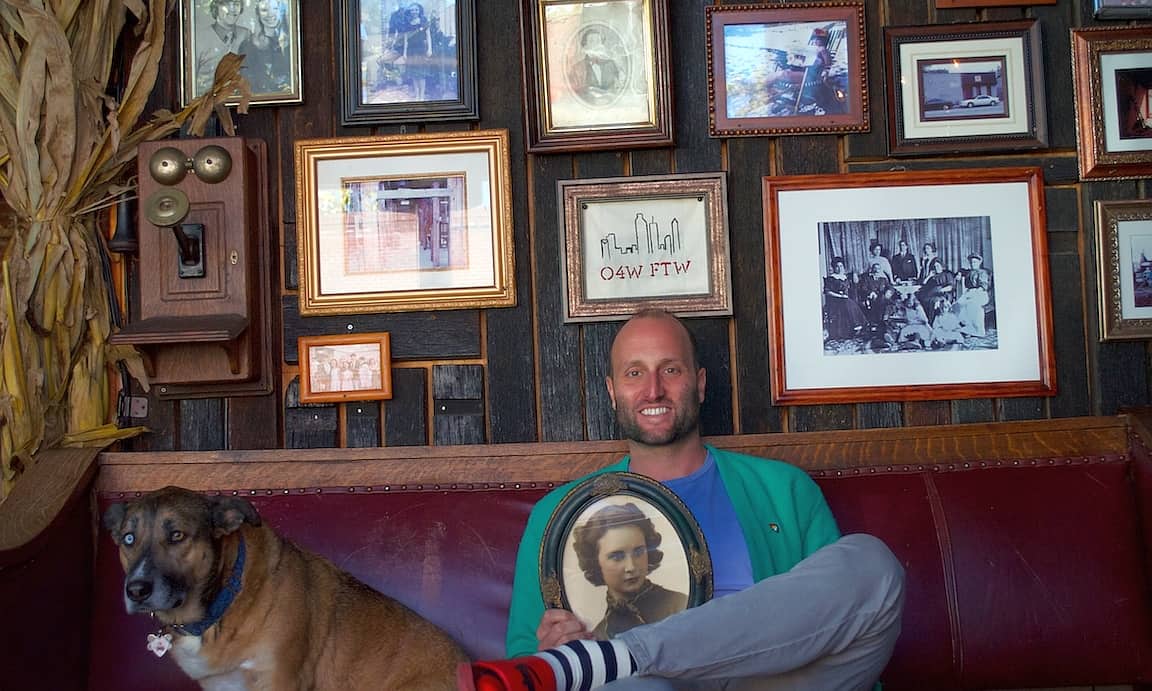 Work It! Noni’s owner Matt Ruppert on the restaurant’s path to prominence

It is only 11:30 a.m., and already a row of men in orange workshirts and one in an olive button-up are seated along the bar at Noni’s.

Restaurant owner Matt Ruppert has spent his mornings in a similar fashion since Noni’s opened in 2008. He named the restaurant on Edgewood Avenue after his Italian grandmother, whose Hollywood-coiffed, sepia photos can be found throughout the interior.

“It’s my home,” said Ruppert. “I live across the street with my boyfriend. I commute to work really easily.”

He leans to pet his dog who wags her tail between the bar chairs.

“And Lucy comes with me,” he said.

Ruppert, 38, went to school to earn a degree in business from the College of William & Mary, before attending Georgia State for a Masters in French Literature. While studying, he worked as a server for different restaurants around town. The money was easy and the pressure was low. But everything changed when The Food Studio let him go after four years of service.

“I was hoping to channel all the anger I had, from this guy who had just fired me, into a new idea for what my future self would look like,” he said.

He gathered together a group of friends and began spinning off business ideas the same day of his firing. After brainstorming and months of location searching, Noni’s opened to the public in July 2008.

The early days at Noni’s vacillated between excitement and terror. Ruppert describes the pressure of being responsible for others’ livelihoods and of paying off loans – and the way this constantly occupied his mind. In Ruppert’s words: it sucked. But he wasn’t about to give up.

“Almost every day – even back in the dark days – there was always something reaffirming that I was doing the right thing. There was at least one customer who would freak out over how good that sandwich was, or a review we’d get in a paper that would help keep things mostly sufferable,” said Ruppert with a laugh.

Then Saturday night unexpectedly saved Noni’s. The office workers who stopped in for lunch or dinner during the week disappeared on the weekend. Saturdays meant little to no business. The turning point was the arrival of a group of young locals who relished having a restaurant to themselves.

The friends repurposed the dining tables for board games and hijacked the now-gone jukebox late into the night. Ruppert and the staff watched Noni’s gain a cult following as an under-the-radar place to party. Soon, Saturday night meant DJs spinning and a crowd of people dancing inside the packed Italian restaurant — first DJ Vicki Powell, then DJ Preston Craig helped establish the Common Sense and Nonsense parties with DJs Tom Bruno, Rusty Weidinger, Kimber and Doppelganger. Ruppert remembers watching Noni’s profits hover above zero and finally feeling like they could make it.

By 2011, things had settled and Ruppert set his eyes on the neighborhood as a whole. He dreamed of holding a festival for Old Fourth Ward, but he couldn’t do it alone. He needed to join together with other community members.

“I’ve always thought that a festival is the crowning jewel of a neighborhood’s success,” said Ruppert. “You’re able to show off your neighborhood, bring folks from other parts of the city or state to your neck of the woods and show ‘em what you’ve got.”

Ruppert helped found the Old Fourth Ward Business Association, which is now comprised of over 100 different business members. In addition to influence, the Association could provide a festival. Fire In the Fourth has been running for three years, for which Ruppert was the festival chair on the board of the association for the past five years. The Business Association now classifies as a 501(c)(6), a tax-exempt nonprofit league, with greater ability to work with legislation.

Ruppert himself is never too far from politics. When Noni’s first opened, the restaurant prominently displayed three HOPE images of Obama lining the front window. Ruppert’s business partner at the time tried to talk him out of it. Even Ruppert’s parents voiced concern about using Noni’s moniker to post political content online.

“Prevailing wisdom is if you’ve got a business then you’ve just got to keep your mouth shut about certain things, when it comes to politics,” Ruppert said. “That just didn’t work for me.”

Years later, Ruppert traveled to Washington, D.C. to participate in the Million Women’s March and came back to Atlanta desiring to continue beyond protests. Local artist Alli Royce Soble helped to organize postcard writing “parties” wherein people could encourage one another to take the time and provide resources to write to their elected officials.

Ruppert chose Noni’s to host several of said gatherings. Roughly 75 guests attended each time. There were thousands of postcards, all of which Ruppert mailed personally.

Noni’s is an intensely personal business for owner Matt Ruppert. The restaurant reflects his values, his heritage, his home, his career. He describes one day being so closely associated with his business that he imbues it with his personality in a way that is clearly visible. The future looks rosy. Ruppert is hiring managers to streamline and he even sneaks in a chance to cook during events.

When asked about then versus now, Ruppert replied, “Big difference. I’d have to say, I think it goes back to the ratio of good times to bad times. Back in those days, it was pretty much always a challenging time. Nowadays, it’s not. We still have challenges and we still work through them, but those are fewer and farther between.”