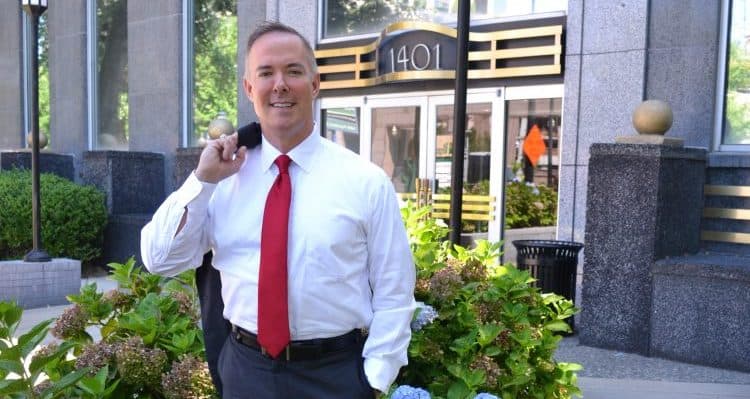 One call may be all that’s required for some personal injury attorneys, but Randy Fry makes it a priority to go to trial for his clients.

“In my business, there are a lot of perceptions of personal injury attorneys. Most people are only familiar with the TV attorneys,” Fry said. “My attitude is, there’s nothing wrong with being a TV attorney, but we find the majority of the TV firms don’t try cases.”

His firm, however, specializes in taking personal injury cases to trial if the need arises.

“We do find consistently that when an insurance company is against a firm that tries cases, they’re usually more apt to resolve cases for a better result,” Fry said.

Fry knew early on that he wanted to be in the courtroom, and chalks that up to a desire instilled in him by his parents to help people. The Fry Law Firm handles cases all over Georgia, and Fry said he appreciates the support of the LGBT community for the way the business has grown.

“We handle strictly personal injury matters here, which means we represent people who are injured by others due to their negligence,” Fry said. “We’re constantly opposing the insurance companies to make sure our clients are compensated.”

These cases include thing such as biking or car accidents, slip-and-falls and pedestrians being struck by vehicles.

One of his most memorable trials was that of a woman injured by a defective chair in a theater. The chair had a three-inch piece of metal protruding from the side and when the woman went to sit down, it sliced part of her leg open and required a lot of hospital care. The theater’s attorneys argued she should have seen the metal, so the case went to trial. Fry and his co-counsel argued that just because an individual isn’t from a white-collar background doesn’t mean her injuries are insignificant.

“The jury found it our way and they compensated her for a confidential amount which we were very, very proud of,” he said.

What to do if you’re injured

Fry is a member of the LGBT Stonewall Bar Association, and said he finds it surprising there are so few trial lawyers who are openly gay.

“There are of course a lot of attorneys generally that are openly out and involved in the Stonewall Bar Association just like I am, but it’s always been surprising to me that I knew very few lawyers that try personal injury cases that are out in the community,” he said.

For anyone who is injured in an accident, their first priority should be their health — which means they’re likely to start getting medical bills, followed by calls from insurance companies.

“Never talk to the insurance company until they talk to an attorney,” he said. “Hopefully us, but if not us, then any good trial attorney. That attorney can advise them on how to proceed.”

Fry said 15 or 20 years ago, most people were able to handle cases on their own, but so many personal injury cases became contentious that many of these companies added hundreds of attorneys on staff, something no individual should go up against alone.

Fry grew up in Chattanooga, Tennessee, the son of a lawyer and a music teacher, and went to Belmont College. After graduation, he was inspired by the Tom Cruise movie “Cocktail,” and decided it was time for a break.

“I moved down to Fort Lauderdale and for two years, all I did was work out and hang out on the beach and sling drinks at night,” Fry said. “Then my motivation got to me and I was bored and ready for the next challenge. I had always wanted to be a lawyer, and I knew that was the right time to go.”

He didn’t want to do the same sort of law his father did — estate and tax work, “one of the most boring fields in the world” — but remembered being interested in cases where older clients were taken advantage of by financial firms.

“That’s how I kind of went into the personal injury area,” Fry said. “One thing that got me interested in personal injury law is I always wanted to be in the courtroom and be a litigator, but … most law students thought there was too much litigiousness in the country. I wanted to be a defense attorney representing insurance companies. Within months of seeing how the insurance companies treated the people, I knew now I found my calling of what I wanted to do.”

Fry attended John Marshall Law School in Atlanta, and worked as a personal trainer to pay for his education. He worked with several different law firms in Atlanta and Decatur before breaking out to start his own firm.

“[Attorney Bruce Hagen] is the one that really taught me how to try cases, how to conduct myself as an attorney in the courtroom and how to win with grace and how to win with humility,” Fry said. “I had six wonderful years working for Bruce, but after six years I was ready to go out on my own.”

The Fry Law Firm began in 2011 with Fry and his telephone, and six years later there are three attorneys, three paralegals and seven legal assistants in the spacious suite at 1401 Peachtree Street.

“We’ve been very blessed to grow so quickly,” Fry said.