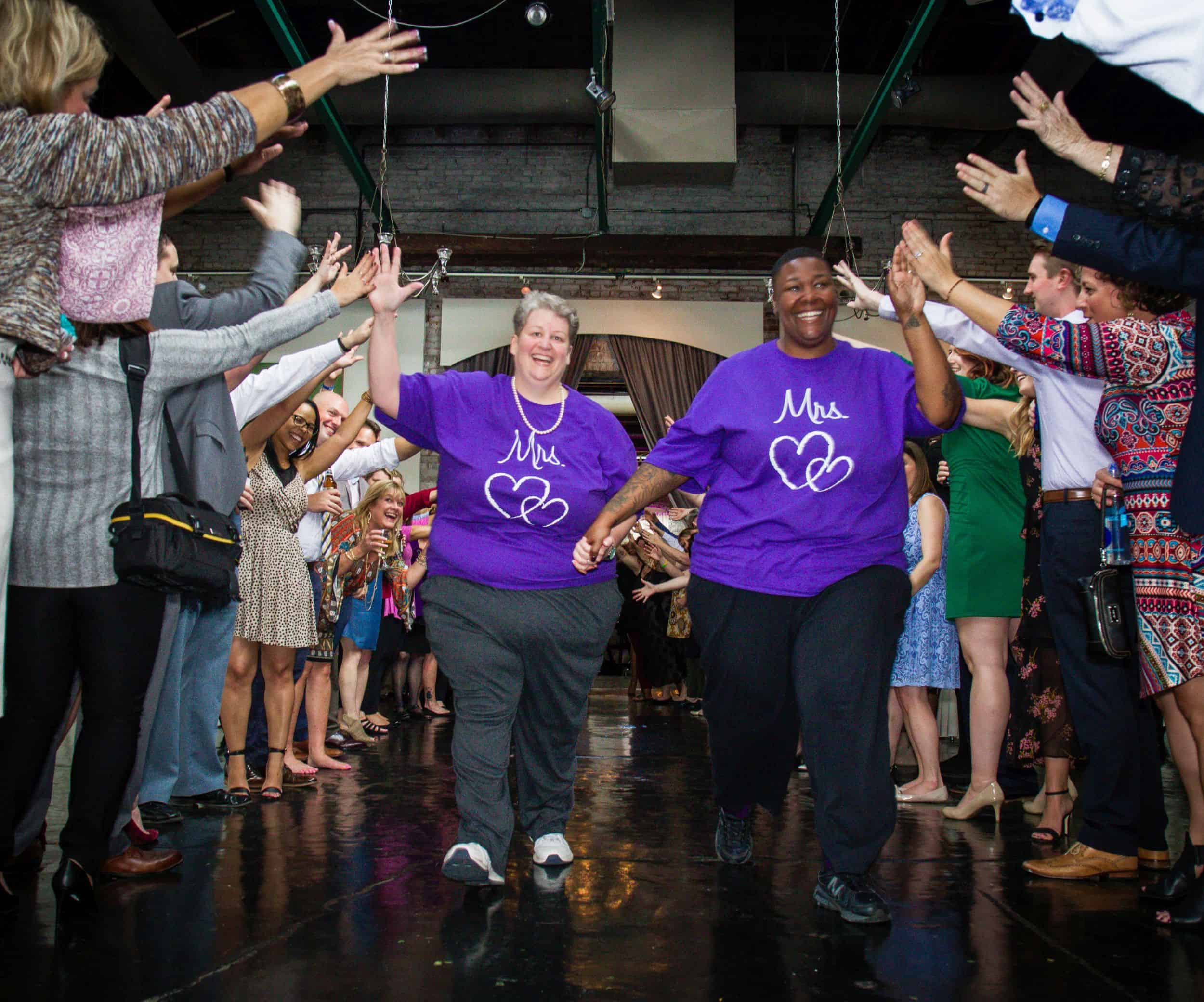 The two met in April 2010 at the since-closed Marietta gay bar LeBuzz and hit it off immediately. They began dating and have been together ever since, but until 2015, marriage wasn’t a serious consideration.

“Several of our friends were taking the plunge, but I didn’t want to be pressured in getting married for the sake of getting married,” Behm said. “Our first date anniversary is April 10, which is when I wanted to originally propose, but I re-thought the whole idea when she said she wanted to have a [masters of business administration] graduation party.”

After Behm praised the resilience of her soon-to-be-fiance, their friends and family flipped over posters to help her ask for Smith’s hand in marriage.

“One of the first things I did was to tell our parents of my plan because I knew it would be a difficult pill for all of them to swallow. Two very traditional southern families with gay daughters who want to get married, but oh wait — they are also two different races. They weren’t easy conversations, but it was the right thing to do, no matter the outcome,” Behm said.

Behm proposed in May 2016, and the two tied the knot last October.

“Before the wedding we took dance lessons to prepare for the first dance,” Smith said. “The most memorable moment for me was when we did our ‘special move’ and I leaned back and smiled for the camera. The audience loved it and it made for a great photo.”

However, it was during their vows that Smith’s emotions almost got the best of her.

“I just remember feeling overwhelmed with love and emotion and getting a little choked up,” she said. “[Behm] pulled me back by saying, ‘Keep it together, Smith.’”

Smith had her own surprises for her spouse on their wedding day. She presented Behm with a bag full of self-care items and a card expressing her feelings, which was one of Behm’s top memories.

It wasn’t just joyful tears that filled their perfect day. There were plenty of comedic moments, too.

“My dad’s toast stole the show,” Behm said. “My dad gave his toast after [Smith’s] dad gave his. He said that he couldn’t follow such wonderful words, but he would give us the best toast that he could. Then he reached into his coat pocket and pulled out an actual piece of toast. The joke was totally on us and everyone absolutely loved it.”

She said the most important advice she has for upcoming brides and grooms is to enjoy themselves, because the day will fly by.

“Make your wedding what you want it to be and be clear on what you want,” Behm said. “The two of you aren’t going to agree on everything, so be prepared to listen to what is important to your partner because in the end, you both want the same thing.”