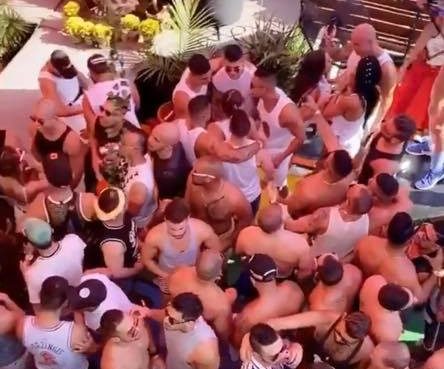 The party, which has been the highlight of Atlanta’s circuit party scene for the past nine years, kicked off last Friday (August 28) after being postponed from its original June date. The event was advertised as a smaller scale affair than in years past, with organizers claiming social distancing and masks were required.

Alan Collins, the general manager of Heretic, posted to Facebook in early August detailing the preparations the club was going through to ensure partygoers’ safety, which included a revamped patio space, hand sanitizing stations and social distancing barriers throughout the entire club. He also claimed the club would operate at 35 percent capacity.

Another Facebook post from the night of the party also shows signs suggesting patrons wear their masks.

However, social media coverage of Peach Party shows attendees paid little to no mind to the precautions promised by organizers.

Videos and photos were posted to social media showing attendees of various Peach Party events, most of whom maskless, packed in wall to wall, prompting criticism from many.

I guess the pandemic is over ok go back to what you were doing. <removes certain clubs and promoters from potential future events> SMH #MakeItStop

This is not the first event Heretic has controversially hosted during the pandemic. Following a party in June, the club shut down when two patrons tested positive for COVID-19 and “dozens more [felt] sick,” sources told The Advocate.