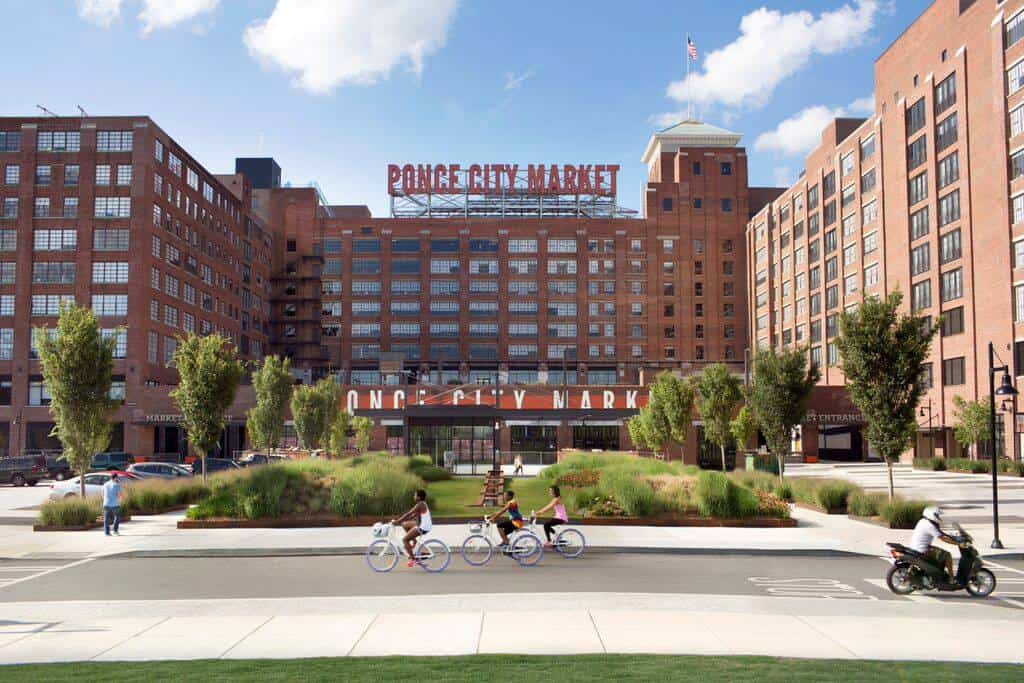 It’s a shame that Atlanta’s most iconic eateries are The Varsity, Chick-Fil-A and Waffle House, as the metro area has a buffet of more appetizing options. And the ATL’s culinary cred is on the upswing now as the city emerges from the burger and cupcake fads of the past few years, with new concepts and recipes to serve and satisfy a modern Southern palate.

There are neighborhood favorites and hidden gems across the city, re-imagined food courts in trendy intown areas, and LGBT owners, chefs, staff and clientele throughout Atlanta’s restaurant industry. We’ll start our tour of the city’s taste buds with the most notable trend of 2015: the creation of chic food oases along the northeast Beltline.

Made up of almost two dozen restaurants and vendors, the newly opened Ponce City Market aims to become the city’s premier culinary emporium. The Central Food Court is a hip, open-dining atmosphere that brings together James Beard Award-winning chefs with the guys who created Atlanta’s favorite popsicles.

Whaddya have? Maybe vegan kimchee and Korean BBQ from Simply Seoul, fried chicken from Hop’s Chicken, or Mediterranean favorites from Marrakesh. A couple of Atlanta’s most celebrated chefs serve up their latest offerings at Ponce City Market, with Anne Quatrono’s W.H. Stile’s Fish Camp and Sean Brock’s Minero, while “Top Chef” alumnus Hector Santiago revives his El Super Pan bistro, which was one of Atlanta’s true secret treasures in its old basement location in Poncey Highland.

Among the most mouth-watering arrivals at Ponce City Market is H&F Burger, which democratizes one of Atlanta’s most nationally known foodie traditions. The burger that was formerly only available to the first 24 customers to order after 10 p.m. at Holeman & Finch in Buckhead now has a permanent home on the H&F Burger menu.

While Ponce City Market is receiving more press and hype, hipsters can still snicker about how they remember when upscale food courts were new and cool, as Krog Street Market established the blueprint for this “refurbished industrial” trend when it opened last fall. Krog Street Market signaled from the start it was taking casual, communal dining spaces to another level, as the pioneering restaurants were Craft Izakaya, a Japanese grill and bar from chef Jey Oh, and The Luminary, a French-themed creation of another Atlanta veteran of “Top Chef,” Eli Kirshtein.

In its first full year, Krog Street Market has expanded to 13 restaurants ranging from the Frankly hot dog stand to Grand Champion BBQ to The Little Tart Bakeshop. Fred’s Meat & Bread, in addition to sounding like the qualities I look for in a husband, is a powerhouse sandwich shop, with burgers, cheese steaks and po’boys.
For more international flavors, Krog Street Market encompasses Mexican at Superica, Middle Eastern at Yalla and Szechuan cuisine at Gu’s Dumplings.

While the new-wave food courts at Ponce City Market and Krog Street Market are an exciting addition to the Atlanta menu, here’s a mix of standards, dives and five-stars in Atlanta’s neighborhoods:

A smorgasbord of restaurants pops up in Midtown annually, but Henry’s Midtown Tavern has established itself as a down-home favorite. With pork that’s braised over three days and cooked overnight, Henry’s strives to provide chef-driven cuisine in a neighborhood speakeasy atmosphere. The menu is highlighted by burgers, tacos and dogs, and the patio is a buffet of eye candy during brunch in the warmer months.

While the rainbow wall of frozen-drink machines is the centerpiece of The Daiquiri Factory, the food menu has continued to expand and attract throngs of LGBT diners. Seafood lovers have turned a trip to The Daiquiri Factory into a Monday ritual for its all-you-can-eat snow crabs.

Midtown recently received an infusion of flavor and ambiance with the opening of Varuni Napoli, an artisan pizza parlor with an open kitchen. Using a combination of imported meats and cheeses, with locally sourced veggies, Varuni Napoli tosses pizza-making to new heights with ingredients like buffalo mozzarella and spicy salami. The indoor dining room features cafeteria seating and a full view of the restaurant’s mesmerizing pizza ovens, while the backyard patio offers romantic nooks to enjoy a private dinner.

It’s no secret how an 88-year-old restaurant maintains its freshness: continue serving some of the most beloved southern recipes to the Gray & Gay sets. Popular with octogenarians and LGBT transplants alike, the Colonnade is known for its generous portions of classics like fried chicken, pot roast and coconut pie, and recently celebrated its first anniversary of accepting credit cards!

Nestled among the buttoned-up steakhouses and fine-dining concepts that flood the Buckhead restaurant scene is the charming Joy Cafe, where you can taste the love and attention given to each made-from-scratch dish. The family-owned soup and sandwich shop roasts all its meats in-house and combines rural European recipes with traditional Southern flavors to open a new world of deliciousness.

Some restaurants benefit from their location, but Eclipse di Luna is one that thrives despite its roundabout address. Tucked behind Sidney Marcus Boulevard on a hideaway street called Miami Circle, the tapas bar has been a magnet for diners with its eclectic offerings and electric ambiance. It’s ironic that Eclipse di Luna is such a popular spot for first dates, given how hard it is to commit to any of its combinations of shareable plates.

Another small-plate gem that’s off Buckhead’s beaten path is KR Steakbar, an Italian/steakhouse hybrid from chef Kevin Rathbun. The cozy hideaway hand-makes more than half a dozen pastas, and Rathbun has become an Atlanta legend with his mastery of ribeye, hanger and other prime steaks. KR Steakbar combines those flavors with an exquisite décor to create an ideal spot for a date night or birthday dinner.

There’s no better way to wake up than with the flavors served at West Egg Cafe, which epitomizes the taste-making growth of the West Midtown area. The name draws deserved attention to the restaurant’s breakfast specialties, including an eggs Benedict on salmon cakes or pulled pork, a fried green tomato wrap and an eggs-and-potatoes plate lovingly known as the West Side Pileup. But the Southern flavor seeps into the afternoon menu as well, in items such as the spot’s signature peanut butter and jelly sandwich and a double burger topped with pimento cheese, bacon and tomato jam.

Restaurants come and go quicker than the seasons in Atlanta, but for more than two decades Bacchanalia has stood out as a modern Atlanta institution. It is one of the most elevated dining experiences the South has to offer (from caviar and foie gras to its five-course service), and is a regret-free splurge for anniversaries and other special occasions.

Watch out, Chick-Fil-A—a new chicken empire is emerging in Atlanta, and this one is lesbian-owned! After developing a devout following in East Atlanta, Delia Champion opened her second Delia’s Chicken Sausage Stand on the West side last year. The variety of handcrafted chicken sausage links with the joint’s famous “comeback” sauce, or the chicken sausage sliders on Krispy Kreme buns are so addictive that Delia’s operates 24/7 on weekends.

For more than 70 years, Busy Bee Cafe has been nourishing the West End area of Atlanta, a part of the city that is on the cusp of new development with the expansion of the Beltline. Some modern restaurants think soul food stops at fried chicken and collard greens, but the menu at Busy Bee smells like a Southern grandma’s kitchen, with cubed steak and neck bones, ox tails and ham hocks.

There are plenty of chic and froufrou restaurants in Virginia-Highland, and then there is George’s Bar & Restaurant, home to one of the best burgers in Atlanta. The no-frills, throwback décor seems to emphasize that this place is only concerned with two things: kick-ass burgers and beer.

Adding an Asian flare to Southern barbecue, Sweet Auburn BBQ has gone from a kiosk at the Sweet Auburn Curb Market to one of Poncey Highland’s hottest restaurants. In addition to traditional BBQ meats and sides, Sweet Auburn has niche offerings like turkey and waffles and pimento cheese wantons.

Few restaurants have taken advantage of their positioning along the Beltline as effectively as Parish Brasserie & Neighborhood Cafe. The upstairs of the revamped venue houses the main French/American restaurant, where you can dine on chicken liver mousse, pan-seared sword fish or smoked pork belly, while the lower level has been converted into a “curbside” deli for a convenient, delicious break while hiking the Beltline.

East Atlanta Village sometimes operates in its own universe, which may be why the Octopus Bar feels like an extraterrestrial dining adventure. Intended to provide “punk rock fine dining” to late-night crowds, Octopus is open from 10:30 p.m.–2:30 a.m. and hosts a local highlight reel of guest chefs and an ever-changing menu with a Euro/Asian twist.

Along with a focus on flavor that has resulted in its cinnamon rolls and Gouda scrambles becoming renowned Atlanta dishes, Radial Cafe has long been a leader in promoting sustainable, eco-friendly restaurant practices. The creative American cuisine, including many vegan options, has made Radial a favorite breakfast and lunch spot, but its expanded menu and daily specials make it an all-day destination Thursday–Saturday.

The flavor-packed into the meals at Las Brasas could no longer be contained in its original hut on Howard Street, and with its recently expanded space comes an expanded menu. Known for its Peruvian rotisserie chicken, Las Brasas now serves Peruvian barbecue as well as squid and octopus.

Unlike most international menus that try to showcase the crème de le crème of another country’s dishes, Chai Pani shares the Indian street food that fuels everyday life there. Your taste buds will need a passport when you bite into the kale pakoras or Parsi chicken burger.

Our tantalizing tour of metro Atlanta has taken us through foreign cuisine and millennial food courts, so it feels right to end with a bit of home—as in the theme of “Top Chef” fan favorite Kevin Gillespie’s newest restaurant. Designed to look like and rekindle the feelings of family dinners at home, Revival is Gillespie’s ode to Southern traditions such as catfish, Coca-Cola braised pork and “My Granny’s pole beans.”
Mmmmm, nothing tastes better than home, and Atlanta has us full.