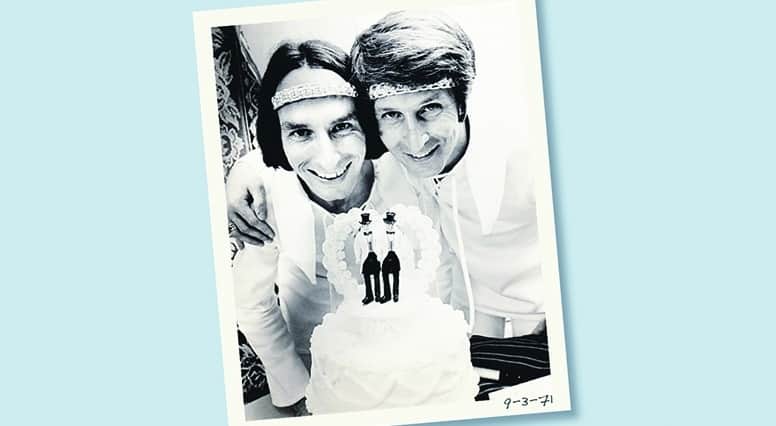 Book Review: ‘The Wedding Heard ‘Round The World’ a sweet story wrapped inside a righteous fight

There’s always been a picket fence in your future.

You could just picture it: charming spouse, two-point-five kids, minivan, Cape Cod with manicured lawn, birthday parties on the patio, all surrounded by that picket fence. It was a perfect dream of a blissful life. And, as in “The Wedding Heard ‘Round the World” by Michael McConnell with Jack Baker, as told to Gail Langer Karwoski, making history would be a nice bonus.

As a child playing with neighborhood girls, Michael McConnell remembers wanting the same thing they wanted: to grow up and marry a handsome man. Their crushes were his crushes, too, but in the 1950s, that kind of thing wasn’t discussed.

By the time he entered college at the University of Oklahoma in the mid-1960s, however, McConnell had come out to his family and was comfortable with his sexuality. He met other gay men and enjoyed an active social life on campus and then, on October 29, 1966, he met Jack Baker.

For the first minutes of their get-to-know-you, McConnell thought Baker was much older, or perhaps straight. Baker’s demeanor was businesslike, almost military; McConnell had recently had his heart broken, and was guarded. Still, by the end of the evening, they were lovers; soon after, they were a couple.

By the early 1970s, though their relationship had to be kept quieter, McConnell and Baker were “out” enough to want to make real change. Baker, a Minneapolis law student, filed suit against the U.S. military over an unfair downgrade in his discharge status. After following Baker north, McConnell fought job discrimination. And then there was the wedding Baker promised McConnell on Baker’s 25th birthday. It would happen—they just had to figure out how.

That would take some time, but Baker was on it. His legal training tickled his methodical mind, until he discovered two loopholes the state of Minnesota hadn’t closed. One led to the next, and both led to their history-making wedding in 1971.

That, of course, isn’t the end of the story.

Authors Michael McConnell and Jack Baker continued their activism, but their nuptials, the first in America for same-sex celebrants, are the real focus in “The Wedding Heard ‘Round the World.” And that’s a good thing, too, because the love story in this book is what makes it so readable. McConnell’s account (as told to Gail Langer Karwoski) is mostly what’s here, and it’s the quintessential romance: boy meets boy, boy marries boy, they live happily (almost) ever after.

Conversely, it’s the almost that makes this book so important: the battles the authors accepted caused emotional hardship in many ways and that almost led to a breakup. And yet, for the sake of others who came after them, they continued to take on gay rights issues—stories of which are told humbly, yet proudly.

Overall, this is a sweet story wrapped inside a righteous fight, told with charm and grace. It’s deep, yet lighthearted and definitely worth a look. Start “The Wedding Heard ‘Round the World”—and you’ll have no defense.