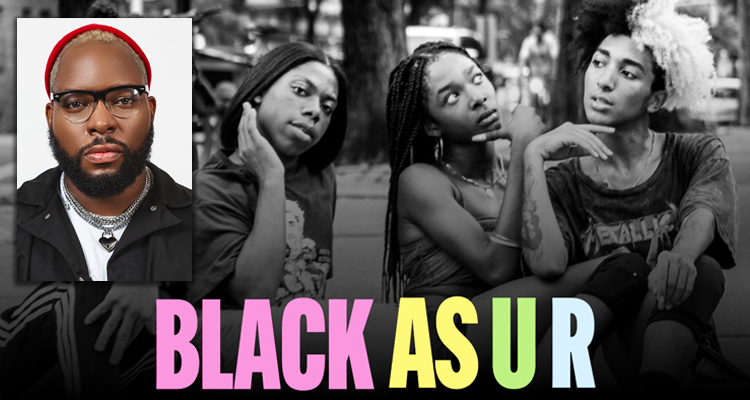 Micheal Rice, Director of ‘BLACK AS U R’ / Courtesy photo

A Conversation with Micheal Rice, Director of ‘BLACK AS U R’

Black as U R is the second documentary by filmmaker and professor, Micheal Rice, winner of Frameline46’s annual Out in the Silence Award for ‘brave acts of visibility.’ His previous work, ParTy Boi: Black Diamonds in Ice Castles (2017) focused on the crystal meth epidemic prevalent among young, queer Black and Latino men — coinciding with the crimes of Ed Buck. Rice is no stranger to starting tough conversations in queer POC communities.

In his latest work, Rice examines the intersections of being Black and queer in a resurgence of mainstream interest in the BLM movement. Rice tracks Black queer people’s involvement in liberation movements back to Bayard Rustin’s March on Washington; Marsha P. Johnson’s involvement in the Stonewall Riots; and the founding of BLM by two Black queer women, Alicia Garza and Patrisse Cullors. Historically, even though movements for Black liberation have been helmed by Black queer and trans individuals, they are often maligned by queerphobia. “BLACK AS U R” confronts the marginalization and violence Black trans women face in the Black community.

The film’s opening mimics the pandemic “doom” scroll, a barrage of traumatic content with seemingly no end for Black viewers. Rice’s documentary branches inward from the striking, public beating of Iyanna Dior filmed by bystanders and participants, beginning with scholarly talks with Professor Michael Roberson, a creative consultant on FX’s Pose, and Dr. Charlene Sinclair, a Black liberation theologist. Roberson notes the capacity of the non-Black majority to view images of violence upon the Black body is a part of a historical narrative of white supremacy’s othering, which ‘trickles down’ to Black trans women. Sinclair frames the violence against Black trans women as a part of a larger narrative of “taking power” through “othering under a cis-heteropatriarchy.” Rice prioritizes a body of work representative of a collective of Black creative and scholastic voices. He takes us through an evolution of archival footage under a white gaze to a reclamation of power in his images of the Black body experiencing euphoria.

Rice spoke to Georgia Voice about the inspiration behind the film, intersectionality, and how he brought attention to the othering of Black trans women with his film.

How does it feel to receive recognition for “BLACK AS U R” at Out On Film?

I haven’t made it to the ‘mainstream mainstream,’ but my name is out there. You’re playing on this fine line of imposter syndrome but also realizing, ‘I do deserve this, and I do deserve to have an agent and all these things.’ … I’m very thankful to God and the spirit of my ancestors for giving me this gift of storytelling … I wanted to tell stories I never heard as a queer Black teen or even in my early 20s … because everything was predominantly white gay and male in media.”

[“BLACK AS U R”] can speak to the history of being Black and queer, the history of racism in our country, and what it was like to go through different tiers of persecution from Black trans men, to Black trans women, and as a gay Black man while also having the perspectives of Black people who are professors and have the knowledge and know-how. I’ve never seen that in all of the cinema I researched outside of Marlon Riggs 32 years ago, which were more avant-garde, artistic vignettes of poems but not as direct as [“BLACK AS U R”], which is in a journalistic space.

I didn’t know about Marsha P. Johnson and Sylvia Rivera because of the whitewashing of history. I knew about James Baldwin and Bayard Rustin, but I didn’t go into depth because I was still searching for myself as a queer person. So how could I follow history when I didn’t even know myself? But when I did, it was important to me to create a film and bring this information to the world from the spirit of a Black person. That’s what makes [“BLACK AS U R”] so special.

What was the dynamic contrast you wanted to create with your childhood experiences as a child in the South with values of faith, family, and football to the interviews with Kiki girls in Greenwich and Philly?

I needed to see more than myself … I felt I needed to see Black trans women, Black queer women [Alicia Garza and Patrisse Cullors], and conversations with Black women like Dr. Charlene Sinclair as a professor and her experience in sociology and organizing and Professor Roberson of the New School … I wanted a collective of voices, which is why I included myself — initially I had another subject to tell the experience of a gay Black man but then they dropped out. I had the same story, and it hit home for me.

I decided to hone in on the aspects of transitioning for a Black trans man and Black trans woman [as well as] the intersectionalities of [myself] growing up in the church in Texas, my home life in the church, ballroom community, and sex work. I [have been] in New York since I was 21.

What was it like working through the vulnerability of the barbershop interviews?

“[“BLACK AS U R”] deals with family structure, especially for Black and brown families — what does it look like? This is why we went into the barbershop, to have those conversations with uncles and fathers. I always had this fear of being outed in a barbershop. As an adult and as a grown man, I had to face my fears because I knew if I sat in my discomfort, it would help someone else.

I could’ve chosen differently and put someone on a soundstage, but I felt like I would lose the authenticity of going in there … This barbershop said: ‘We don’t have time for that, so whoever is in my chair is who you are interviewing.’ I was told specific directions, and I popped up with a crew. Everyone signed their consent forms, and I said I’m interviewing people about what’s happening in the community right now, with BLM, and members of the LGBTQ community. As soon as I said that, I started to get this angry bear sound, but also a father said, ‘I want my son to be a part of it because we have very different views.’ Everything you saw was dead on, unscripted, and authentic. We could’ve been HBO Max and they would not have cared. I loved it — it was raw.

What hope does the son in those interviews give you for the future of queer Black youth?

You have a heterosexual, cis male, Black teenager. He’s very settled in his mind at a young age. I left his clip at the end because I wanted people to see the future of progressive, young Black men. I did not want to demonize Black men, but I also wanted to show an arc of patriarchy, white supremacy, entitlement, and the othering of individuals … They are open, they are loving, they are progressive, and they want to hear you out.

What attention do you think this doc has brought to the othering Black trans women face in the Black community? How are the girls after doing this documentary?

It has opened the doors for Aphrodite, Nellie is focused on dance and people are contacting her for guest spots on TV shows, Palmer is getting music gigs, and Goldie is rapping more but she was already on a trajectory upward before the film. We flew them out to San Francisco, and they were just taking everything in. They saw the name of their film on the marquee and Aphrodite was crying, because she thought she would be in the Bronx all her life. Her story is helping people now.

“BLACK AS U R” will be screened at Out On Film at 7 p.m. Sunday, September 25 at Landmark Midtown Art Cinema. Order your tickets at outonfilm.org. You can view the “BLACK AS U R” trailer at blackasur.com.

Director for stage and film, producer, and choreographer Micheal Rice can be found at michealrice.com or on Instagram @micheal_rice.