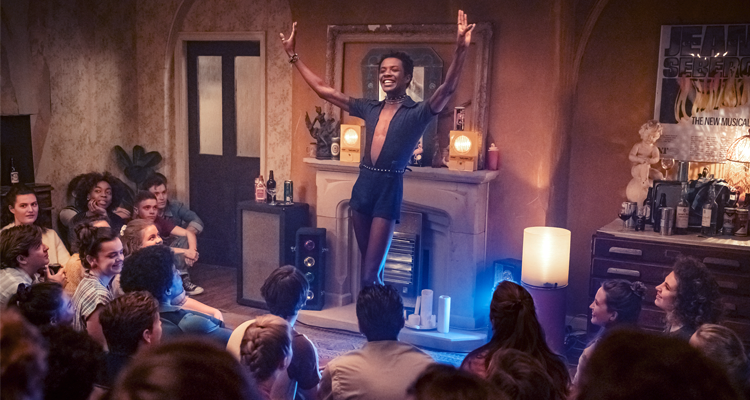 As Russell T. Davies tells it, he could have written his acclaimed new series “It’s a Sin” a while ago, but, busy with all sorts of other projects, he didn’t get around to it until recently. The openly gay driving force behind the UK version of “Queer as Folk,” as well as a writer for “A Very English Scandal” and the remount of “Doctor Who,” he’s nonetheless happy to get his story of friendship during the beginning of the AIDS crisis out into the world. “I’ve been heading up to it all these years,” he told Georgia Voice.

Spanning a decade, “It’s a Sin” revolves around three gay young men — Ritchie (Olly Alexander), Colin (Callum Scott Howells), Roscoe (Omari Douglas) — and their straight friend Jill (Lydia West), sharing a flat in England in London in 1981. Their lives are pretty carefree — that is, until HIV/AIDS begins to surface.

Like the characters in the series, Davies was 18 in 1981 and lived with a group of his friends. Frequent clubbing and partying was the norm, but as HIV appeared, things started to change. Yet in England there wasn’t much information available on the new disease. This was a time where there was no Internet, no cell phones. “It’s hard to imagine,” Davies said. “A younger audience is watching this kind of amazed.”

During the time, whispers and rumors abounded about a “gay plague.” “People were saying, ‘Don’t sleep with Americans,’ as though that was a way of escaping it,” he said. “It was seen as this distant, strange thing.”

The first time Davies took the situation seriously was in June of 1983. He was a student at The University of Oxford, and while out and about, he bought a magazine called Him. It was a porn magazine full of naked men and personal ads, but it had some news and politics as well. “I walked down the street, and I stopped dead in my tracks because the cover was a test tube of naked boiling men with a caption that said AIDS DEATH PLOT PANIC, drawn by artist Oliver Frey,” Davies said. “That was the first time I went, ‘Oh, it’s real.’”

As his career progressed and he became noted as a writer and producer, this piece was always in the back of his mind. “I realized the British story had not been told,” he said. “I felt like there are some great, ferocious pieces of work, but here in England it was different. I thought there was some room for it.”

Neil Patrick Harris and Stephen Fry have memorable moments in the series, but the heavy lifting is done by the younger actors, many of whom are very new to the craft. Davies credits casting director Andy Pryor for aggressively seeking out new and impressive talent for the project.

Both versions of Davies’ series “Queer as Folk” were wildly popular and helped many gay men feel comfortable about themselves. Davies takes enormous pride in that. “It was 1998 when I made it and 1999 when it transferred,” he said. “Someone would have done it. There was a rising voice of gay writers and queer writers. It was always on its way — thank God we made it. It went around the world. It was an extraordinary time for me but mad. It was lovely and I know it will be my legacy. It will probably be on my gravestone. It will be a very funny gravestone to have but I don’t mind. It’s been a delight.”

At a time when controversy has brewed about straight actors continuing to play gay roles, Davies was adamant about having a gay cast for “It’s A Sin.” “I think it brings something new to the screen,” he said. “My job is to make a drama unlike what I did
20 years ago, or even one year ago. Right now, there is this rising openness and queerness. I could talk about this forever. I know full well it’s illegal to ask an actor if he’s gay or not; that’s what protects workers in all sorts of settings. So, what we do is create an openly free, openly queer space where we say to actors and agents, ‘If you want to be out, we’d love to meet with you. Come and audition.’ You don’t have just gay actors walking in but openly gay actors who are the next generation, frankly.”