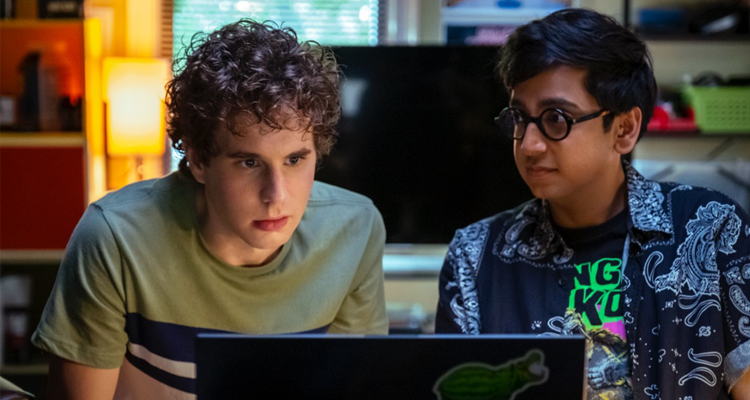 A Success on Stage, “Dear Evan Hansen” Flounders as a Film

One of the most highly anticipated films of the season has turned out to be somewhat of a dud. With Ben Platt returning in the role that made him a star, the film version of “Dear Evan Hansen” is a well-intentioned but bland take on the widely popular stage musical, one that has resonated in the LGBTQ community.

The movie was shot in Atlanta earlier this year and boasts a star-heavy cast, yet this translation doesn’t work on virtually any level.

Evan Hansen (Platt) is a high school student suffering from feelings of social anxiety and isolation. As the film opens, he has fallen out of a tree and broken an arm, now in a cast. He is encouraged by his therapist to write letters to himself each morning about how each day will be a good one. A letter he writes to himself, however, winds up in the wrong hands and is seen by Connor Murphy (Colton Ryan), a troubled young man who winds up killing himself. Finding the letter and assuming it was a suicide letter, Connor’s parents (Amy Adams and Danny Pino) assume Evan and Connor were friends. Making matters worse, Evan goes along with it. He also has a crush on Connor’s sister Zoe (Kaitlyn Dever).

Other characters include Evan’s hard-working mother Heidi (Julianne Moore), who is a nurse’s aide, his gay family friend Jared (Nik Dodani) and Alana (Amandla Stenberg), an ambitious high school student who has a lot in common with Evan.

The film gets off to a promising start with a rendition of “Waving Through a Window” as Evan wakes up and goes to school, weaving in and out of a hallway and into an auditorium without one person seeing or even acknowledging him: “I try to speak, but nobody can hear — So I wait around for an answer to appear — While I’m watch, watch, watching people pass I’m waving through a window, oh,” sings Platt in one of the signature songs.

Yet what was successful on stage seems melodramatic on the big screen. Much has been made about the decision to cast Platt in the lead role despite him now being in his late 20s and his father is one of the producers. He doesn’t look like a teenager at all. Evan gets away with what he does in the musical because he’s a teenager trying to figure out life and his place in it. Here, though, with Platt looking like he should be working at the school instead of attending as a student, it just doesn’t work. The character comes across as self-absorbed, and the damage he does to an already grieving family is cruel. It’s hard to sympathize with the character after a while. Certainly, Platt can sing the heck out of the role, but he doesn’t tone his mannered performance down here either.

Others in the cast seem stranded, especially Adams and Pino in thin roles. Stenberg and Dever fare a little better, and Moore has a great scene where she balks at a financial offer. Yet her character is underused.

The role of Jared was not gay on stage but is in the film. Both Platt and Stenberg are out performers.

This is directed with little flair by Stephen Chbosky, who made the excellent “The Perks of Being a Wallflower” and the box office hit “Wonder” with Julia Roberts and Jason Tremblay. Nowhere is this uninspired direction more apparent than in the number, “For Forever,” a beautiful song about loneliness and not fitting in, which the director stages around a dining room table with the principals basically just looking at each other. Under Chbosky’s direction, it’s a wasted opportunity and a misfire of a poignant and haunting song.

“Dear Evan Hansen” has never been nor ever will be a better show than “Come From Away,” the musical it beat for the 2017 Tony Award. It caught on, though, and became a pop culture phenomenon with its appealing central character — who is easily relatable on the stage, at least — and irresistible songs by the team of Benj Pasek and Justin Paul. Its closing passages are also staggering in their onstage impact.

As a film, though, “Dear Evan Hansen” is unfortunately ill-conceived and unbelievable. Worse, as a musical, it’s flaccid. Fans of the stage work are likely to be very disappointed here.