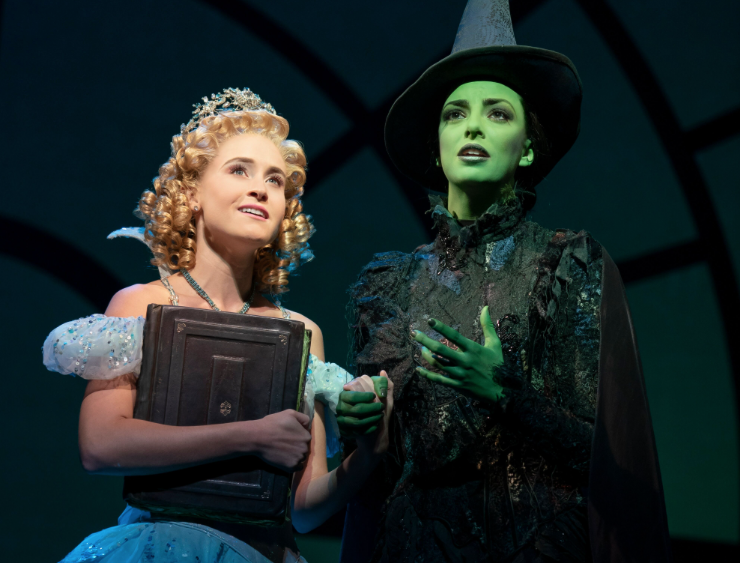 Two LGBTQ favorites – the musicals “La Cage Aux Folles” and “Wicked” – are getting splashy productions in the ATL right now, courtesy of Out Front Theatre Company and Broadway Across America, respectively.

“La Cage Aux Folles” debuted in 1983 and is based on the popular play and film about a long-time gay couple and the chaos that ensues when their son brings his fiancée’s conservative parents to meet the family. This version is directed by Out Front Theatre Company’s artistic director Paul Conroy. “La Cage Aux Folles” has long been the most requested show by patrons, says Conroy, whose company is starting its fourth season.

“La Cage” was supposed to be the first show the company ever staged in 2016 but the rights to “Priscilla, Queen of the Desert” became available and Conroy opted for that instead, especially as that it had never had a Georgia engagement. Yet the “La Cage” timing was right now. “We have been around enough now and people know us, so we wanted to do a title that people would recognize that would get those who had not been able to see one of our shows to see one,” he says. “‘La Cage’ seemed like a natural fit.”

He talked a lot with the cast about the fact that it’s an old-fashioned show but one that feels almost more relevant now that same-sex marriages are so prevalent and have been front and center. “You have this couple that has been together for 20 years,” he says. “I told my lead actors – you are together for love. There is nothing legally binding you together. There are still many couples that are like that, that have been together for so long. Even when marriage equality came along, marriage isn’t something for everyone. I think the show holds up because people now feel comfortable seeing a love story on stage that mimics their own love story and relationship. It doesn’t feel like something hidden any more. “

Actor Justin Wirick has long been obsessed with the show “Wicked” – the prequel to “The Wizard of Oz” – and he jumped at the opportunity to join the touring cast when a job was offered to him. He is coming up on his 10th anniversary in January as part of the national tour’s large ensemble. Every night, he has roughly 15 costume changes. He gets to be a flying monkey, a student at Shiz, a guard, an official, and a citizen of the Emerald City. “The two hours and 45 minutes goes by really quickly,” he says.

He saw the show when he was 15 and vividly remembers thinking he would be the perfect addition. “It was always a goal of mine,” he admits. He loves every city and performance and is in no hurry to look elsewhere. Job security is hard to come by in the industry and he laughingly refers to his gig in “Wicked” as the government job of musical theater.

Almost every gay man has a connection to ‘The Wizard of Oz,” he feels. “When I was little, it had such an influence on my life. Ruby slippers – I wanted a pair; they were splashy and magical. You fall in love with Judy Garland and there is dancing, colors and The Yellow Brick Road.”

Wirick was born in a small town in Philadelphia and always wanted to get out of there and travel. This gig gives him the opportunity. He has been touring since he was 20. He was part of a national tour of “West Side Story” and this is his second Atlanta gig of “Wicked.”